The Legend of Zelda: Ocarina of Time 3DS Review

So many people have been waiting for this moment, not just Nintendo fan boys but everyone and not just to play The Legend of Zelda: Ocarina of Time re-mastered but in full stereoscopic 3D.  With the games re-release on the Nintendo 3DS, which is quite a piece of machinery I must add, there is of course no need for glasses, with the hand held devices three integrated screens giving you the same 3D quality as you would have watching a film in 3D with glasses, if not better.  Ocarina of Time is haled by many as the best Zelda game ever made and quite possibly the best game in the entire Nintendo franchise.  Too many games to mention have mimicked many different aspects from the game, only making those games better.  We have learned a lot from simply one game originally released on the Nintendo 64 in 1998 almost 13 years ago.  However the Zelda franchise did not start there as this marks the 25 year anniversary for The Legend of Zelda franchise, with many games having been released with the ever noticeable Link, before and after Ocarina of Time.  It couldn’t be more of a perfect time to revisit the game like never before in 3D and with stunning re-mastered graphics.

With Ocarina of Time being released more than once and being reviewed more than once it would almost seem hard to write a review of the game seeing how it the same story with the same gameplay, but it is also easy to at the same time because the game in 3D makes a world of a difference.  You set foot in a Hyrule that you have never set foot in before, while playing the game in 3D really makes you feel like you are in the shoes of the main character, Link.  The stereoscopic 3D bring the whole world to life like you have never experienced before, from a simple view a scenery to the action of a battle, jumping out at you.  As the world gets new gamers every day with kids getting older, someone who has never experienced Ocarina of Time is in for a wonderful journey. 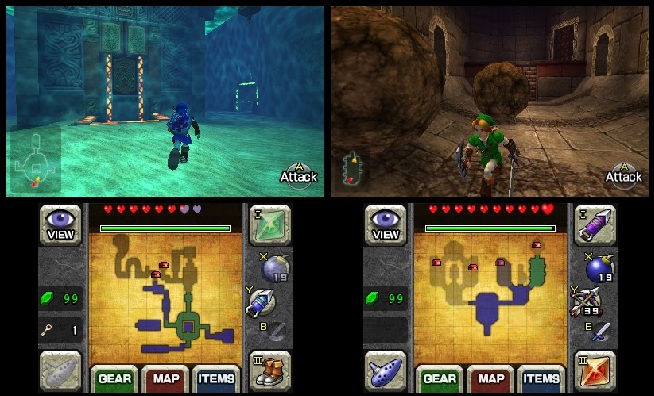 Playing as Link, starting off as a farm boy secluded from the outside world, you eventually realize that you are unlike the children around you and that you have larger destiny that awaits you.  As you realize that, the game quickly turns into an action RPG that is unique from others as you venture out into the world of Hyrule.  Leaving your small village you are given an Ocarina (musical wind instrument), which not only plays a huge role in the game but is part of what made the soundtrack so great.  From a few simple midi tones to a fully Orchestrated Soundtrack is something that will always be a part of what made Ocarina of Time such a classic game.  You learn that the world is not all full of wonderful things rather quickly and will see that there are dark forces at hand.  With your fairy by your side, destiny bestows upon you the fact that you are all that stands in the way of these dark forces, while such a small child is not able to take this on, it soon becomes clear that you must visit The Temple of Time to become an adult and learn the ways to to battle.  You can only do this with the power of the Master Sword only making the story of the game even more of a classic legend in the world of gaming.

From child to adult you will travel from dungeon to dungeon, which is not necessarily a literal term as some dungeons are Water Temples and many various different types with some shadowing the elements of the world.  As you move through each dungeon you will be forces to complete puzzles, fight new enemies all while finding secrets, treasure chests, rewards and gain new abilities as well as gadgets to help you along your path.  In each dungeon you will encounter a boss, in which defeating you will move on to the next dungeon as you continue while being rewarded with extra health every time.  Along your journey, you will encounter new kinds of people and races that can help you or give you things, as well as the unique interactions Link will have with them alone.  Your Ocarina is also one of the most handy tools, as you learn new songs to play on it, they will do different things like call for your horse, Epona, or change the time of day, among many other things.  It is also just fun to pull out and play, while trying to figure out the tune to your favorite television show, as the joystick changes the tone. 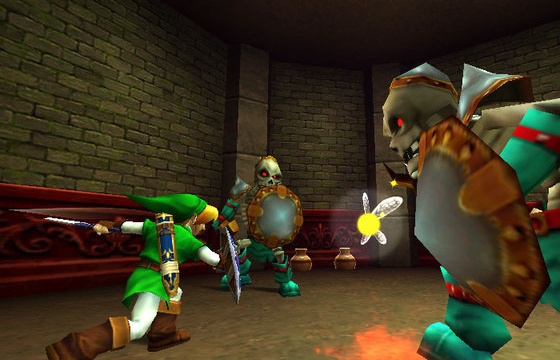 Battles are amazing in 3D

Now I must speak about what makes Ocarina of Time so different from its previous versions in depth.  Now right away you may be stunned by the updated graphics and seeing them in 3D if you have ever seen or played the game before, like I was.  However, a colleague of mine played the game with the 3D off as they said it gave them a headache after a while and the graphics are slightly crisper with the 3D off.  I would NEVER recommend anyone to play this game without the 3D turned all the way up as it is amazing looking and even, Navi your trusty fairy suggests you take a break after playing for an extended period of time which is new, I’m sure due to the 3D as well as the smaller screen.  Holding the left trigger with as always lock on to enemies, but when there are no enemies, you can hold it down for a panoramic view while still in third person, by actually physically moving the Nintendo 3DS up, down, left or right.  By simply clicking the view button on the top left of the lower screen, you go into first person view and can move the 3DS a full 360 degrees to see all around you, which was impressive.  Even more impressive was that the way you aim your bow or slingshot as well as other things is done in the same manor, of course using the internal gyroscope.  This made is much more fun as far as the gameplay goes, especially while riding your horse.

The entire menu is on the lower screen you have Gear, Map and Items button at the bottom which easily bring each up in detail.  While outside of a dungeon pressing the map button on the touch screen will bring a map of the area up on the top screen, two doing the same action inside a dungeon will bring it up on the bottom screen, giving you access to each level, just like the classic version.  The view button will quickly turn to the Navi has something to say button and you’ll know by her voice say “hey”.  There is also now not only mapping what item you want for the ‘X’ and ‘Y’ buttons, but two specific touch buttons on the right side name I and II.  You can also map any item to these for easy access to an item you might have otherwise kept in your inventory in previous version of the game.  Another addition to the 3DS version of the game is helper stones that will show you a future vision or a clue to help you if you are stuck on something which can be found outside your house and by the Temple of Time.  The house of Know-it-All Brothers can be found not far from you home giving you a basic run down of the 3DS controls and the hookshot now has a laser pointer.  Master Rush mode returns letting you play the game in a harder fashion as well as the Boss Challenge Mode that lets you replay any Boss fight you have already had while you are sleeping. 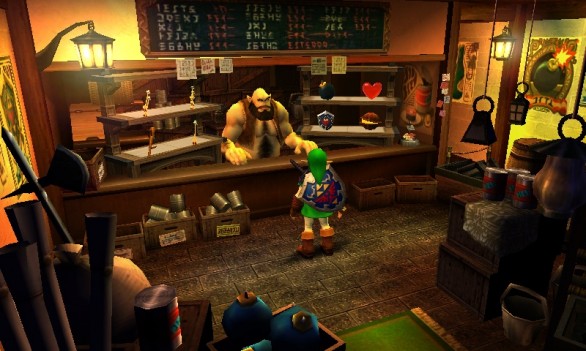 Show me the good stuff..

The Legend of Zelda: Ocarina of Time 3D is one game you must have as a part of your collection, granted you own a Nintendo 3DS or plan to buy one, which is not a bad idea with all the new titles and updated functionality coming.  This game takes me back years ago and brings that wonderful experience I had that is something that happens rarely with games.  Only this time it was more than that, it was an experience that cannot be described in words, nor 2D pictures, but only by play the game.  The only flas that I saw in the game was the camera system and not entirley at all.  You can quickly get the view behind Link by tapping the left trigger but I felt during boss battles or other scenarios, that wasn’t enough.  Other game have the camera behind the character most of the time which is what I think this game needed, but in no way did it take away from the wonderful experience I had playing the re-mastered game in 3D.  The Orchestrated music was wonderful and it could not be easier for my Grandmother to jump into the gameplay with that much ease.  Make sure that this is on your must have list and if you don’t have a 3DS… you might want one for this game.

Graphics are re-mastered and playable in full stereoscopic 3D is amazing.

Camera issues occasionally can get frustrating.

Final Verdict:
EDITOR’S CHOICE
The Zelda game that made the series such a classic household name is back in 3D with an experience that must be seen first hand to truly appreciate.
A copy of this game was provided by Developer/Publisher/Distributor/PR Agency for review purposes. Click here to know more about our Reviews Policy.