Bloober Team have been one of the most prolific developers of horror games over the last half decade, and with titles such as Layers of Fear, Observer, and Blair Witch under their belt, no one can really doubt their talent. Their newest release, The Medium, represents a major step forward for them as a studio. Their most ambitious game to date, this is an idea that they’ve been sitting on and hoping to make a game out of for nearly a decade, and now that they finally have the hardware to back up their ambitions, they’ve done just that. That idea in question is a solid one, and used to great effect at times, and Bloober have clearly stepped up their game in some other areas as well, but their execution here is not faultless.

In The Medium, you play as Marianne, a medium who can traverse both, the spiritual world and the real world, and often both at the same time. A call from a mysterious stranger in the early minutes of the game ropes Marianne into a nightmarish quest of intrigue, which sees her travelling to the abandoned Niwa Resort in Krakow, Poland, and uncovering its violent past, while learning more about herself and her own powers.

"The Medium’s central idea is a solid one, and used to great effect at times, and Bloober have clearly stepped up their game in some other areas as well, but their execution here is not faultless."

Storytelling is definitely one of The Medium’s strong suits. Cutscenes are slickly directed and bolstered by snappy writing and solid performances for essentially all the major characters of the game, and Marianne’s ability to straddle two worlds at the same time is often used to great cinematic effect. At the same time, key details about secondary plot points, characters, and the world itself are discovered through notes and collectibles scattered in the environments, and finding them and piecing together all the information keeps you constantly engaged. All of it comes together in a narrative that might not be outstanding or even entirely unpredictable, but does its job of keeping you engaged from beginning to end.

Marianne’s abilities as a medium aren’t just a boon for the storytelling- they also form the backbone of the Dual Reality mechanic, which is the one aspect of The Medium that deserves praise without reservations. Every once in a while, The Medium splits the screen in two and tasks you with navigating two different versions of a single location simultaneously. Your actions in one reality effect the other, and the execution of the concept does justice to the brilliant idea. Your path in one reality might be blocked, which also impedes progress in the other, while interacting with certain objects a certain way in one world can have interest effects on something in the other. Marianne can also have what are called out of body experiences, in which she can leave her material existence in a state of coma of sorts while allowing her spiritual self to walk around unshackled for a limited amount of time.

Even when you’re not existing in both realities at the same time, Marianne’s abilities remain at the heart of the experience. Touching mirrors allows you to jump between realities during sections where you can only exist in one at a time, and jumping back and forth between alternate versions of the same location to manipulate both worlds by interacting with the environment or solving puzzles is always engaging. The best part is that the game keeps finding ways to mix things up with smartly designed puzzles that don’t ever get too repetitive, and even though the puzzles themselves aren’t too challenging or even too elaborate, the sheer novelty of the Dual Reality mechanic ensures that things always feel fresh and interesting.

"The Dual Reality mechanic is the one aspect of The Medium that deserves praise without reservations."

Sadly, outside of the puzzles, exploration, and the Dual Reality mechanic, The Medium stumbles in several ways. The biggest disappointment is the complete lack of challenge in the game. As I mentioned earlier, puzzles and navigation challenges are never really too difficult, and what highlights those issues even further is the fact that The Medium is a game that relies almost entirely on those things. There’s almost zero combat throughout the game, and instead, you’re put into situations every now and then that require you to stealthily sneak through a room or a location without getting noticed by the supernatural threat known as The Maw. With minimal interactivity and no real challenge though, there’s never really any real danger of failure.

Those issues come together to dull the horror of The Medium in other ways as well. More than a few times, Marianne comes face-to-face with terrifying monstrosities that boast excellent visual designs, but her encounters with them are relegated entirely to cutscenes. Expecting traditional boss fights in a game that has no combat is a little unfair, but set-piece encounters with major enemies don’t necessarily have to be traditional- any kind of interactivity in those encounters would have helped them stand out. In their present form, where they are only cutscenes, I couldn’t help but be disappointed by them.

Thankfully, though The Medium isn’t all that scary, it is, at least, very atmospheric. Excellent music and strong art design come together in harmony on a near-constant basis, and whether you’re quietly exploring the decaying remains of a location in the spiritual world or standing in the shadow of a hulking monstrosity, The Medium keeps hitting you with evocative art style and stirring music to heighten the experience. From an audio-visual perspective, there’s very little to complain about here. Even from a technical perspective, The Medium looks great, and even though there are some minor issues with lip syncing and textures taking a bit too long to load, it’s still a visually impressive game. 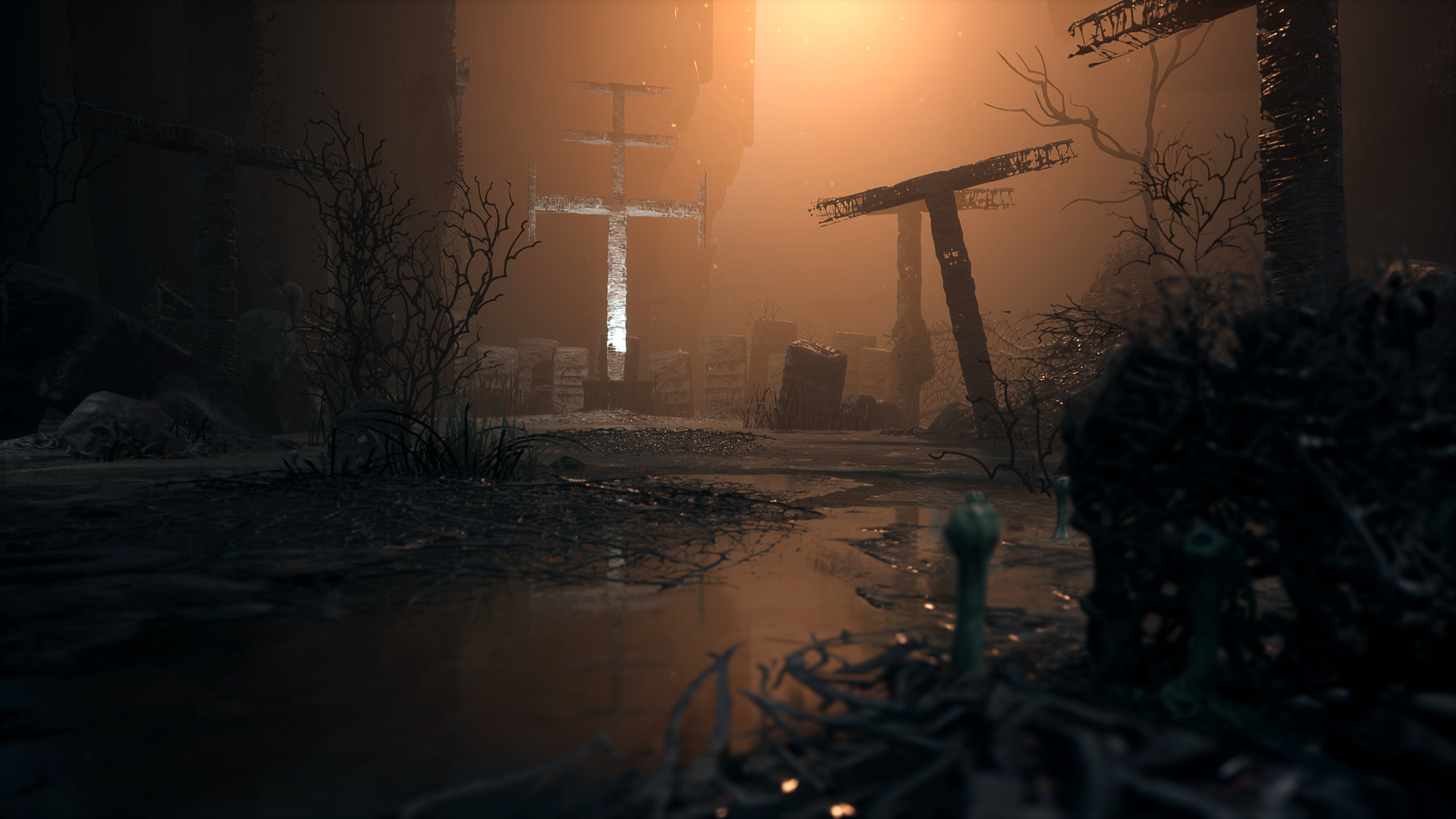 "Sadly, outside of the puzzles, exploration, and the Dual Reality mechanic, The Medium stumbles in several ways. The biggest disappointment is the complete lack of challenge in the game."

The Medium also pays very clear homage to classic horror games like Silent Hill and Resident Evil (the former particularly). A lot of that is abundantly evident in the aforementioned art direction and music, but the most obvious example is its semi-fixed camera angles. This is the first horror game Bloober Team have made that isn’t first person, but you wouldn’t be able to guess that by how confidently and effectively they’ve implemented The Medium’s semi-fixed cameras. Camera angles are used to deliver both cramped and claustrophobic shots and sweeping and cinematic vistas in equal measure, and put together, they contribute significantly toward how cinematic The Medium consistently feels as a game.

Going hand-in-hand with the semi-fixed cameras, however, is sluggish and clunky movement. Marianne’s movements are too slow, and often quite inaccurate (especially when you want her to turn), and constantly having to fight against something as simple as movement can be frustrating. Of course, classic horror games would routinely have characters with purposely impeded movements, but that used to serve a purpose there, where having to struggle to aim and turn and even move while fighting against oncoming enemies would lead to tense gameplay situations, thus heightening the horror. In The Medium, which is a game that has no combat and focuses entirely on puzzles and exploration, that slow, cumbersome movement just feels like a bit of a nuisance.

Something else that holds The Medium back is its length. I finished the game in about six and a half hours, which felt too short. Every time I left a major location and moved on to the next, I was left with the unshakable feeling that the game hadn’t done everything it could with that area. The Medium definitely needed more time to breathe, and with another couple of hours or so added to its runtime, I feel like it could have been a much better game. It doesn’t help that it ends very abruptly. As I mentioned earlier, storytelling in The Medium is solid, by and large, but its ending is one of the most frustrating and abrupt endings I’ve seen in a game in some time.

"The Medium definitely needed more time to breathe, and with another couple of hours or so added to its runtime, I feel like it could have been a much better game."

Even with all the issues, I do want to applaud Bloober Team for what they’ve tried to do here. With its semi-fixed camera angles and its focus on exploring environments and solving puzzles at a deliberate pace, The Medium is a game that holds a lot of appeal for fans of classic horror titles. Meanwhile, its Dual Reality mechanic is a rare example of a genius concept being backed up by equally solid execution. Strong art and music also come together to deliver an experience that’s oozing atmosphere. It’s disappointing that the game is plagued by major problems that dampen its strengths, from its short length to its complete lack of challenge. What we’re left with is a decent horror game that has some really good ideas, but ultimately fails to live up to its potential.

Encounters with terrifying monsters are relegated to cutscenes; Complete lack of challenge dulls the horror; Too short; Bad ending; Sluggish and cumbersome movement serves no purpose.

Final Verdict:
GOOD
The Medium is a decent horror game that has some really good ideas, but ultimately fails to live up to its potential.
A copy of this game was provided by Developer/Publisher/Distributor/PR Agency for review purposes. Click here to know more about our Reviews Policy.