Pandemic is best known for their actions titles, especially for the Star Wars: Battle Front series as well as the zany humorous game Destroy All Humans! and recently has been the victim of termination by Electronic Arts. To some this comes as a major surprise considering the popularity associated with their games. No matter your views on Pandemic’s catalog it is saddening to see a company that had been with us for over a decade officially close it doors this past year. 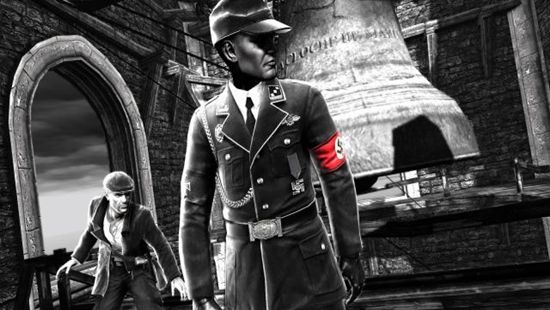 The dark and light mechanic is unique but it has its own share of issues.

With this in mind, the question is whether or not The Saboteur, Pandemic’s last stand, swan song, etc, is worth the purchase(or at the least a rent) seeing as the game is a combination of several games. With elements from the likes of Assassin’s Creed’s stealth and exploration, Grand Theft Auto’s open-world with varied missions, and the over abundance of Nazis seen not only in video games but over in Hollywood as well, it is understandable that many may be weary of yet another time consuming game with similar experiences. Though there are a few interesting and unique creative takes on these “genres” but are they enough to have the game stand on its own?

One of the most interesting and daring aspects of the game is the use (or over-use) of putting most of the world in the beginning of the game in Black and White. This creates amazing sequences of seeing the world change as you put life back into the lovely areas throughout France. It also is amazing to drive through an area that is drenched in the depressing Nazi-controlled black and white areas into the areas where the resistance (with your help of course) have made a stand while seeing things immediately begin to change. This also causes some problems as well as some areas become too dark and can cause some major accidents when speeding through areas well over the speed limit(sorry French Pedestrians!) 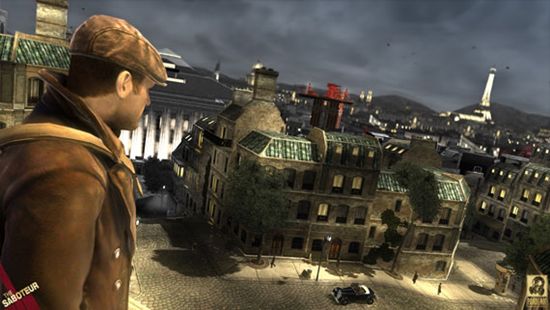 The world is pretty open ended.

Besides the lenient use of the absence of color is the portrayal of varied areas of France. Personally, I have not visited France…but after playing this game and being able to explore the world I’d love to put the money down for a first class ticket to the lovely country(if I had the money that is). The world is better explored in color though. Especially when driving or running through the country-side with the lovely wheat fields drenched in a lovely gold. The architecture of the cities are also shown well in the game and really adds to the immersion of the game as a whole. Climbing the Eiffel Tower, or any of the several “sight-seeing” areas, are amazing as they give you a great view of much of the cities.

The textures are beautiful as well and I’m not only talking about the textured jubilees seen in the Montmartre clubs. The building’s textures as well as the models and vehicles all seem well made, however some of the lip-syncing is a bit off and some of the animations could use a bit more tinkering, but overall it is a great pleasure to the eyes.

Personally, I’m not a big fan of the story… or the presentation of said story. You play as stereotypical drunk Irish man who loves women and cars… and playing pranks on people. Ok. Honestly… I don’t know if he actually loves playing pranks on people, but the reason that Sean Devlin is thrown into the group of French resistance fighters which resulted from his losing a race with a dirty, cheating Nazi and then Sean deciding to play a nasty prank on Mr. Dierker. There is a tad bit more to it, but I’d hate to spoil what little plot is presented in the game. Let’s just say it’s a bit too predictable and presented with a bit too much cheese. And of course wine(or at least alcohol) since our good ‘ol boy Sean loves him some alcohol… most likely prefers whiskey, but I digress.

Once he finds himself within the resistance you begin to notice the likeness with games similar to Grand Theft Auto. You get a mission, jump in a car(most likely hijacked), follow the way point, shoot some bad guys(or destroy some property), talk for a bit, rinse, and repeat. Though, I won’t say the story is borderline brain-dead, I will say It doesn’t get too interesting till about half-way through where the predictability begins to subside. Bottom line : the story is more of a filler till you can get back out on the streets to actually play the game…which brings me to the next section.

I love Grand Theft Auto, I loved Red Faction. The Saboteur is a mix of these two as well as a climbing mechanic from Assassin’s Creed and this is both a good and bad thing. I have yet to play Assassin’s Creed 2, but from what I’ve heard it is an improvement over the first…well the climbing aspect in this game seems to not have improved much over what it was influenced by. And at times…seems to add more issues to the game play. It really causes much frustration when trying to smash the A button to climb over a ledge when the entire Third Reich is trying to shoot your ass to pieces. It is also infuriating when a few glitches pop up every now and again when trying to tell the game WHERE you want to climb.

The shooting aspect of the game really has little fault from what I could tell…though much like games like Red Faction…the game really loves making you feel like a one-man army at some points…and others…like a drunk Irishman. The difficulty seems quite balanced for the most part, but every now and again a sharp drop/curve will appear as if the game is reminding you that you are not invincible. The varied amount of guns is nice, but really acts as a form of an RPG element where you are striving to earning enough money (the game’s form of currency is “contraband”) to buy the next best thing.

In order to earn the most contraband (besides playing missions) the game has several locations meant for you to blow the hell out of. Sadly, this fills like a half-baked version of what we saw in the recent Red Faction destructible environments. While it is IMMENSELY entertaining to rush in stealth to the nearest Nazi Tower/Building/Tank/etc. and wait till the c4 detonates and watch as all the Nazi become alert like little bees ready to sting a little Irishman…it still leaves room for the player wanting more destruction. There is also the racing aspect of the game which brings in some breathing room when you have your fill of blowing and shooting the Nazi’s up you can do a few races with the sports cars you can earn in the game. Of course the driving can’t really be compared to the likes of Gran Turismo or Project Gotham Racing, but it is at least fun and slightly rewarding.

I’d have to say this is a great last game to showcase the best Pandemic had to offer. Sadly, we won’t be able to see what else the studio had to offer. While there is much to improve on the game, it does a great job at blurring the lines in mixing up the several elements found in the many games I listed. I’d love to see a sequel that addresses these issues, perhaps set in a different time period though…I’d love to see other games play with the idea of using black and white for an interesting atmosphere. I feel this was a great and unique mechanic in The Saboteur, yet can’t help to complain that it could have used much improvement as far as game play goes.

Many Thanks to our friends at thesaveppoints.com for this great review and especially to the author: Josh

Great Enlistments, Great Game play, Use of different gaming elements, Unique use of Black and White, An open-world worth exploring

Weak story, The use of the different elements sometimes ends up in half-baked situations, the Black and White mechanic also leads to some problems

Final Verdict:
GOOD
While there's a lot of room for improvements in The Saboteur, it's still a very enjoyable game.
A copy of this game was provided by Developer/Publisher/Distributor/PR Agency for review purposes. Click here to know more about our Reviews Policy.