The Sojourn Interview – A Harmony of Puzzles, Symbolic Storytelling, and Stylistic Visuals

Lead programmer Aria Esrafilian talks to us about storytelling, visual imagery, puzzles, the team’s influences, and much more.

Posted By Shubhankar Parijat | On 10th, Oct. 2018 Under Article, Interviews

Quite recently, indie development studio Shifting Tides announced themselves to the world with a trailer for a beautiful looking first person puzzle title called The Sojourn. In addition to a trailer that showcased some striking imagery, the development team also shared a few bits and pieces of information on what we can expect their game to be, calling it a “thought-provoking” narrative-focused title in which players “traverse the parallel worlds of light and darkness in search of answers to the nature of reality”.

It’s certainly an interesting pitch, and one that got us quite excited about what The Sojourn might hold for us. As such, we reached out to Shifting Tides to ask them a couple of questions about the game, about everything from its visual imagery and its storytelling style to the games that have influenced them and their general experiences with working on such a title as a small indie studio, and Aria Esrafilian, lead programmer on the game, got in touch with us with a lot of really interesting answers. 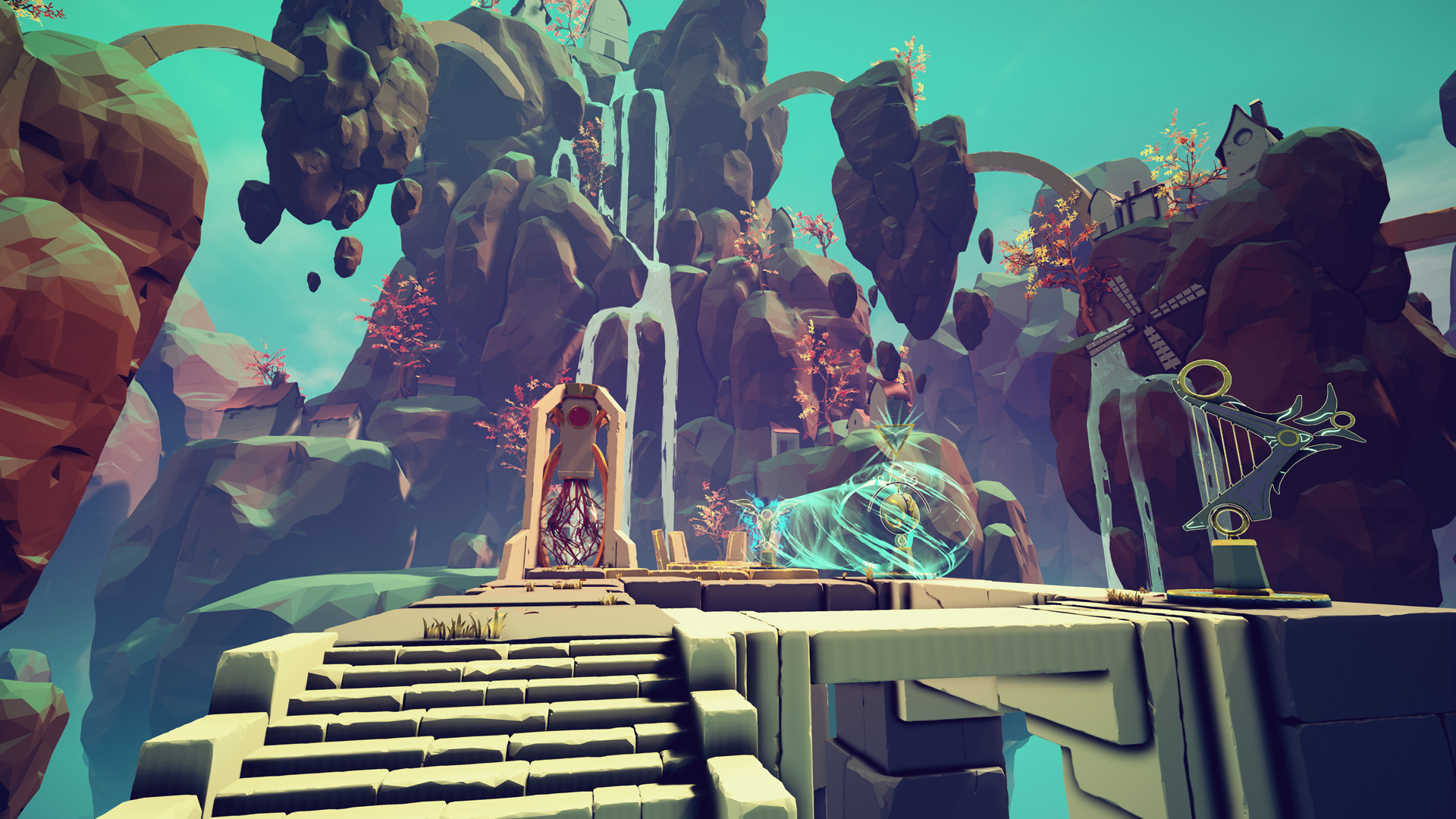 "We want to keep The Sojourn meaningful and kind of philosophical, so there is a point and message we have in mind to share with the community."

From what we’ve seen of the game so far, a lot of the game’s story seems symbolic and philosophical. How exactly do you explore these deep themes through gameplay?

You are right! We tried to make almost everything symbolic, so there is a meaning behind every single part of the game, perhaps not all players will know about every meaning, but they will get the whole feeling and the message we want to deliver. We want to keep The Sojourn meaningful and kind of philosophical, so there is a point and message we have in mind to share with the community.

The first and most visible layer of storytelling in The Sojourn that grabs player’s attention on sight, is the story of some statues. They will appear in the form of sceneries followed by narration, which will be in most parts of the game. We chose a deep and complex story with a symbolic and minimal narration as the best approach to tell The Sojourn.

What can you tell us about the worlds of light and darkness and how exactly they fit into the story and gameplay?

We want to show that we all come to this world as an entity of light with pure hearts, but with great potential for darkness, a darkness that lingers in the outside reality. We then explore how this light can be affected and change as we are growing, discovering, knowing and how people can be ignorant about it and how some people might want to fight this routine. In the game world of light is the pure world inside our heart and the dark world resembles the reality around us that we are living in. Players will traverse between these two worlds to solve puzzles and progress into the game and story.

How exactly do you work to ensure that the puzzles, the story, and the visuals all complement one another?

This was one of our biggest wants: to keep everything in harmony. If we wanted to design something, we had to make sure it was lending more meaning to all aspects or at least it was in the same line. For instance, it was really important for us that game mechanics feel organic and natural while playing. It demands lots of meetings and many deep and sometimes philosophical talks to make sure all aspects are perfectly compatible, but we think what we now have is totally worth it! 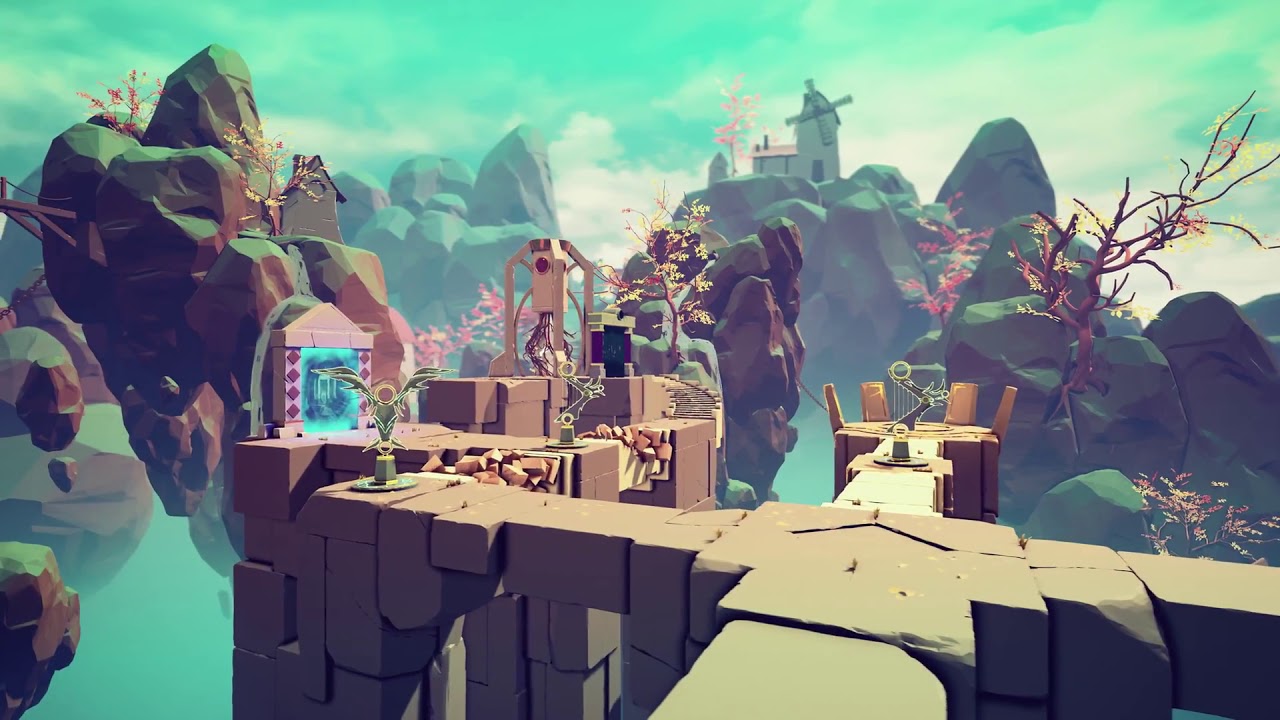 "Our main goal was to create something that intertwined complementing aspects to create a single unique experience."

What are some of your major sources of inspiration behind this game?

Our main goal was to create something that intertwined complementing aspects to create a single unique experience. For instance, in the puzzle genre, we always admired what Portal 2 did. And that’s what we wanted, a game in which gameplay, visuals and story are all in line and in harmony. Not many games achieved this specially in this genre, but this was what we aimed for.

As for another example, we really liked how The Talos Principle combined simple mechanics to solve complex and evolving solutions. We were also pretty much in love with Journey and how its atmosphere conveyed the different feelings in different stages of the game.

Can you give us an example of what kind of puzzles we can expect to see in this game?

The easiest way to say is how you solve puzzles and how we are introducing and combining mechanics together to make puzzles harder is somehow similar to Portal 2. However, the mechanics and how you should play with them is another world. Just to give you an idea how the game plays, players have access to different sources of power to empower themselves to enter the alternative dark world and there are different mechanics, platforms and bridges that are only available and accessible in that world. We will also have lots of extra mind bending achievements all over the place for those who just can’t get enough.

Technically no, but we put a huge amount of time into perfecting our ideas and designing different elements and parts such as puzzles, art styles and story. To be honest, that was the main challenge for us! 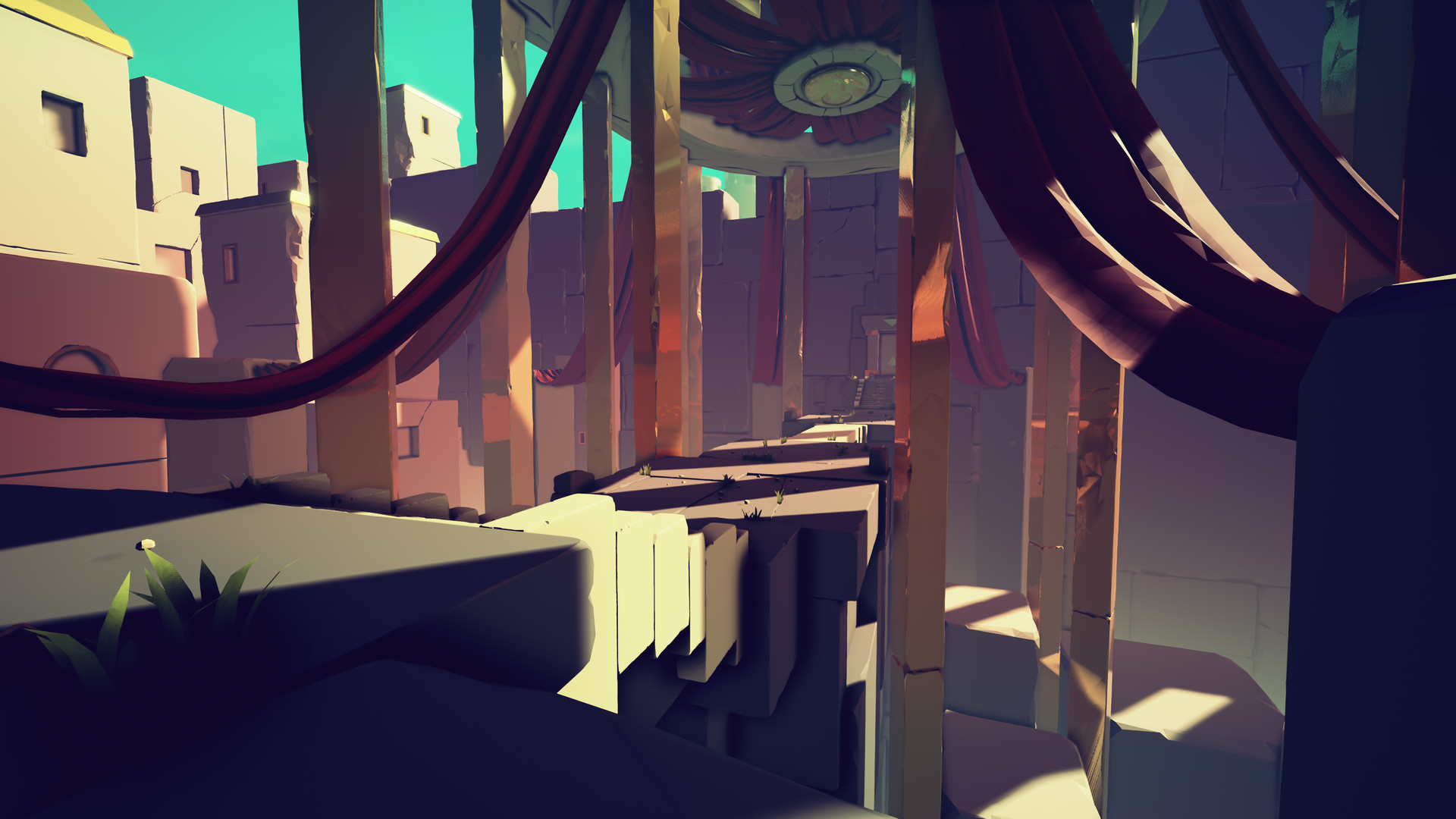 "We are able to exercise more creative freedom but it is a common pitfall for ambitious projects to not consider the final deadline."

Would you say that an indie studio is able to exercise more creative freedom in making games such as this one?

Exactly! We are able to exercise more creative freedom but it is a common pitfall for ambitious projects to not consider the final deadline.

Hopefully we were crazy enough to have a similar experience and tried to be more creative! After close to one year of production we completely forgot about the art style we had because we were not so happy with it and started right from scratch to bring something new!

What gives an indie team an edge in my opinion, is how indie teams can tackle different aspect of design. It can be extra time consuming, but the result can become far superior to other games that are made under supervision of a group where money/budget is their first priority.

You’ve stated that there will be four chapters in the game. What kind of progression will there be from one chapter to the next?

The chapters resemble human’s chapters of life, so story-wise players will witness how the world of The Sojourn evolves from a happy and beautiful dream to a mysterious and reality that has to be questioned. Gameplay-wise, each chapter brings new ways to enter the alternative world, with these new tools player find new ways to use the mechanics of the game, new ways to combine them and new interactions between them.

Is there any particular reason why the game hasn’t been announced for the Nintendo Switch?

We would love to see The Sojourn on the Nintendo Switch and I believe is a good fit for the platform. There are no plans at the moment, as having three platforms for the release is a huge amount of work and we need to take our time to have a closer look at the Switch later to see what we can do with it.

Can we expect more games from Shifting Tides in the future?

Definitely! The Sojourn is the very first step for our brand new company and we want to take it as strong as possible, so expect to see more games from Shifting Tides in the future. 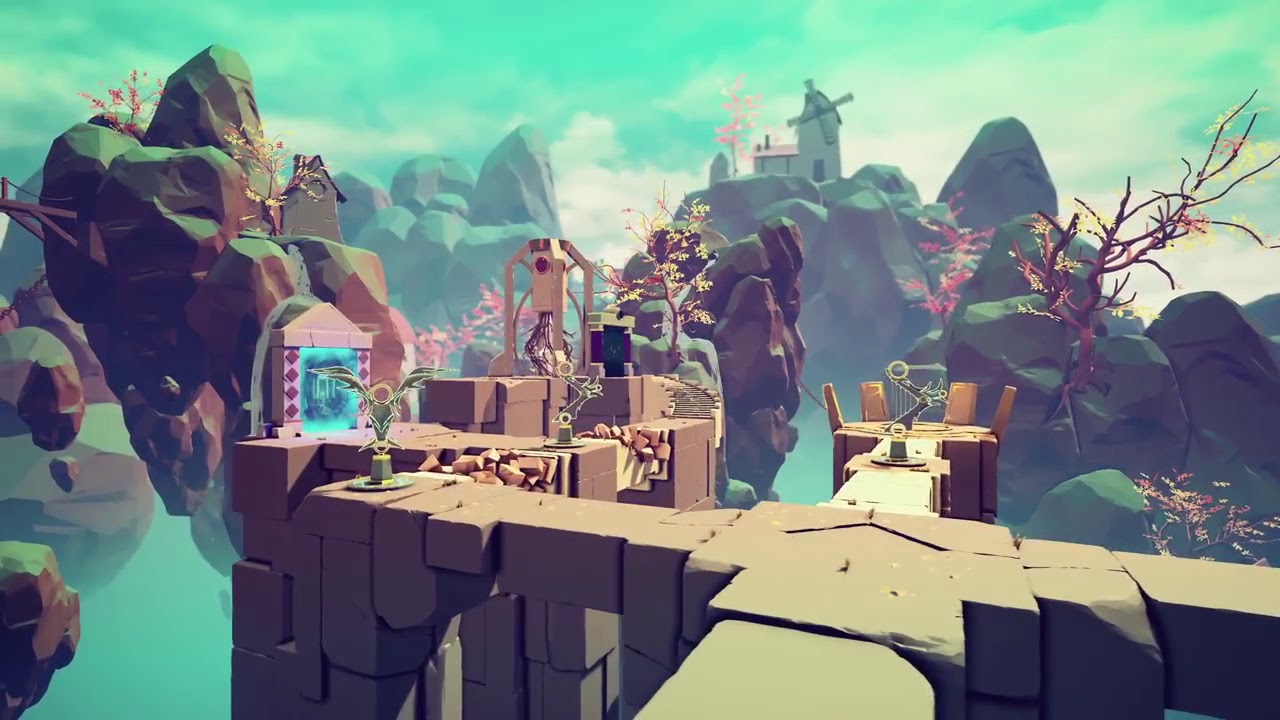 "The game doesn’t have a mainstream visual with lots of explosions, destructions and photorealistic environment and characters and delivers its own heavily directed unique and stylish visuals and art styles which might not have huge differences between different machines and configs."

The game will feature Xbox One X specific enhancements. What can players expect if they are playing the game on Xbox One X? Is 4K/60fps on the cards? And how will the PS4 Pro version turn out in terms of resolution and frame rate? How is the game running on the original Xbox One and PS4, frame rate and resolution wise? Finally, From a development perspective, how do you find the Xbox One X to be? With so much GPU power, we are sure you must be doing some amazing things.

It is a bit early for us to consider and talk about these topics in-depth. For porting the game, Iceberg Interactive is helping us and will handle things and thanks to UE4 it shouldn’t be that difficult to achieve a clean and smooth build on consoles. First tries promise strong final builds! The Sojourn has very stylish visuals, we barely used textures and some other memory consuming stuff, so in case of memory the game is in a really good state and we have a smooth framerate on original Xbox One and PS4, considering that the optimization phase has not started yet. The game doesn’t have a mainstream visual with lots of explosions, destructions and photorealistic environment and characters and delivers its own heavily directed unique and stylish visuals and art styles which might not have huge differences between different machines and configs. So we may want to take benefit from more GPU power to deliver higher resolutions and smoother experience on consoles if possible.

Next-gen is coming sooner or later. From a development perspective, what is your biggest expectation from the next PlayStation and next Xbox?

Yeah, rumors are everywhere and we are very excited to see what is going to happen with the next generation. As indie developers, the best thing for us is having a straight forward pipeline for porting the game, same architecture for different platforms and having much higher performance, so we can finally and literally have our imagination as the only limitation! And of course, having more focus on indie publishing programs from console manufacturers would bring the whole industry to another level, as this generation did on its own.

Will the game have any sort of loot boxes or microtransactions?

The answer is no! We are doing our best to deliver an emotional, deep, meaningful, symbolized and kind of philosophical experience, and under any situation we won’t ruin it with any kind of monetization ideas inside the game!