When Square Enix announced that it would be bringing Final Fantasy to the 3DS, back at the platform’s unveiling during E3 2010, I highly doubt this is what anyone had in mind. But then, Theatrhythm is a great game regardless of your pre-conceived notions anyway. Although it doesn’t quite satisfy the craving for a traditional Final Fantasy epic in autostereoscopic 3D, it does fill another niche, one that we barely knew existed- a role playing Final Fantasy game based on the music of the hallowed franchise.

Theatrhythm: Final Fantasy is exactly what its contrived portmanteau of a name suggests: it is a game that involves theatrically performing attacks to the beat of the music from the mainline Final Fantasy games. The game has a fine selection of tracks, that, coupled with the charming graphics that vaguely evoke the classic SNES and Playstation era Final Fantasy games, will probably leave all Final Fantasy fans nostalgic, and aching for the now long gone glory days of the franchise.

It’s a lovely, charming game, like so many games on Nintendo hardware often are. The music and the graphics, as stated. All the animations, especially for the classic spells. And even the prompts to press the correct buttons to the beat, bright, red circles for tapping, and green circles for pressing. Everything about it is dripping with charm.

In a shocking departure from the trend for Final Fantasy, little to no attempt has been made at providing the game with a narrative framework. There is a cursory paragraph right at the beginning of the game, that somehow tries to justify the premise, but honestly, you forget about it as soon as the action begins. And what action it is. 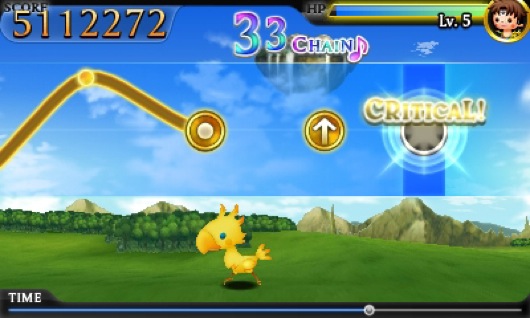 The game has three game modes: a Series mode, which has you go through three tracks from each Final Fantasy game at a time, a Challenge mode, which enables you to play any song of your choice, at any difficulty level; and there’s also a third mode called Chaos Shrine, a harder mode involving sets of two songs. Chaos Shrine mode also has tracks not available in the other modes, so the only way to access some of the tracks is to play a neverending, randomly generated list of two songs at a time.

Once you do decide which mode to play, the basic gameplay is easy enough, especially if you have played rhythm games before, although there are variations based on the kinds of track being played. World music is probably the most basic, with the notes appearing on a single line, for you to either tap (red circle), press (green circle), or swipe (yellow circle). Event music makes it a little but harder, by allowing only a few notes to scroll across the screen, slowly at a time.

By far the best and most chaotic variation, though, is Battle Music. As series veterans already know, the battle music in Final Fantasy is top class, and probably amongst the best of all the music in the series. The tracks are faster paced to reflect the added tension of battles, meaning you have to scramble to hit all the notes just right. Adding to the chaos, however, is the fact that each of your party members (there are four) gets his own line of notes, and you have to tap the notes correctly across all four lines.

Adding to the satisfaction of getting the notes right in Battle Mode is the fact that correct timing will launch some classic attacks from the series against the featured villain in the song – usually a fan favorite from the game in question. The battle mode also gives the game a chance to showcase the RPG elements that it cleverly introduces into the mix. Genre conventions such as an HP bar, which determines how many notes you can miss, character equipment, which can be used for temporary advantages and buffs, persistent character level, and collectible character cards, all make it into the game, and make it that much more attractive and alluring for repeated play throughs. 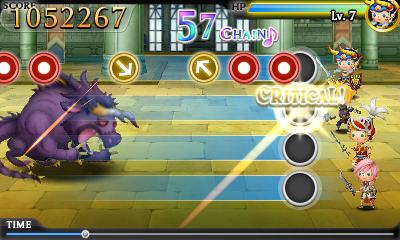 Not that the game needs any such help. Beneath all the RPG fluff, the half hearted narrative, beneath the ‘battle’ against the monster, there is an excellent, excellent, excellent rhythm game, that qualifies amongst the best in its class, and kicks off what will hopefully be a new line of rhythm games from Square Enix. All the game’s distractions, such as the ones mentioned above, and the wholly unnecessary StreetPass and SpotPass modes, do little to detract from the game’s underlying excellence.

Really, there isn’t much to fault the game for. One could argue that the game’s wide selection of tracks is eventually bound to get old, but then, new tracks are already on their way via DLC, and fan favorites and requests have been promised to be taken into consideration.

When Final Fantasy was announced for the 3DS, Theatrhythm is not what any of us had in mind. However, I’m glad that it exists: it’s a wholly excellent game, and it deserves a good chance from every fan of Final Fantasy and its music, and anybody who wants to celebrate the 25th anniversary of one of the most hallowed game franchises of all time.

Charming graphics, great selection of songs, the rhythm game is fundamentally sound, the RPG trappings and nods to the Final Fantasy heritage are appreciated, post launch support promised via DLC

No online functionality, the RPG trappings are nice but unnecessary in the larger picture, the game's half hearted attempts at a narrative suck

An excellent rhythm game, and one that can easily be placed at the top of its genre. Hopefully, Theatrhythm: Final Fantasy is just the first in a long line of rhythm games to come from Square Enix.