This solo-developed Unreal Engine 5 fan mod can easily pass as an alpha version of a proper AAA game starring Superman.

Fans of DC superheroes have a lot to look forward to in the coming months. Firstly, there’s Gotham Knights – which releases in October of this year. Then, there’s Rocksteady’s Suicide Squad: Kill The Justice League which will be coming in 2023 followed by Monolith’s upcoming Wonder Woman game which doesn’t have a release date as of yet. Between these upcoming AAA releases and the massive back-catalog of games featuring DC’s biggest superheroes, there has been a significant void for a AAA game starring Superman with open-world and free-roam elements.

As most would already know, many developers have tried their hands at developing a Superman game with the likes of Superman 64 on the N64, Superman: The Man of Steel on the Xbox, and many more. However, most would also agree that almost all of these games have failed to hit the mark in certain aspects – and fans are still left wanting for a proper well-rounded experience starring The Man of Tomorrow.

Today, we will be looking at what could be considered one of the most impressive renditions of Superman in a video game. I am, of course, talking about the Superman Flight Experience mod that has been rapidly gaining traction over the last few days on social media. Developed by Tyson-Butler-Boschma, this game might not be expansive in its scope – but is most definitely a sneak peek into what a proper next-gen Superman open-world game could be like.

The Superman Flight Experience is built using Epic Games’ latest Unreal Engine 5. Tyson-Butler-Boschma used the free-to-play demo The Matrix Awakens as a basis of development for this mod. With the recent launch of the engine, Epic Games released The Matrix Awakens‘ City – a free-to-download sample Unreal Engine 5 project on the Epic Games Store. The modder used that project and built character models, flight systems, a decent move set, and animations for a character that is representative of Superman. As is clarified on the game’s Itch.io page, the developer has refrained from creating an actual Superman character model so as to avoid any copyright infringements.

Given that this game uses The Matrix Awakens as its basis, it shares the same open world. As a result, players are treated to the same high-quality assets and elegant streaming technology featured in the demo – alongside all of the visual features that Unreal Engine 5 will be offering to developers. From hardware-accelerated ray-tracing to Nanite to photogrammetry to many more, the game has no shortage of impressive visual features that we are starting to see pop up in next-gen games. Suffice to say, the open world looks really gorgeous – both on a macro and micro level. 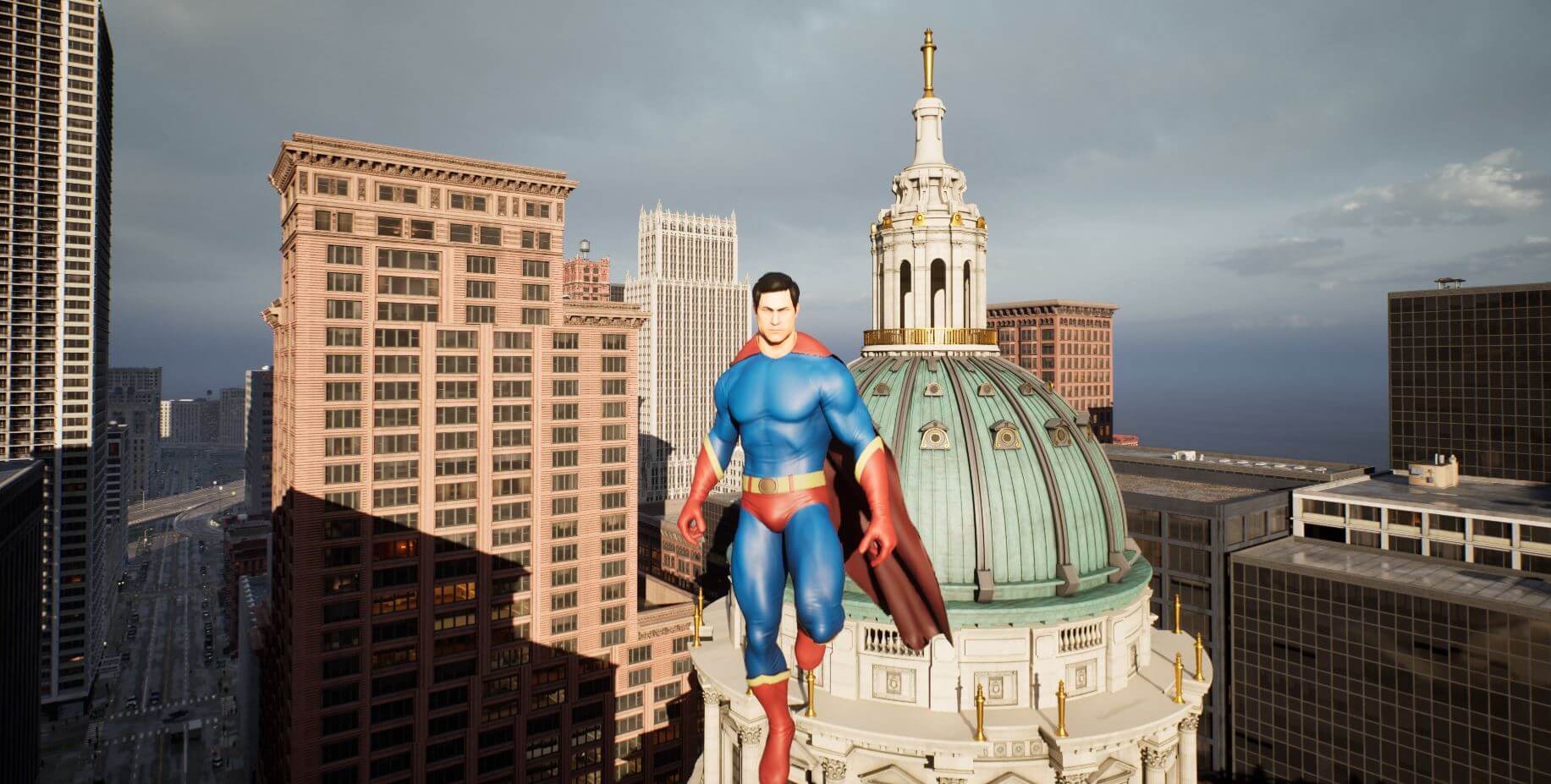 Players are free to zoom around the open world at blazingly fast speeds. The developer has really nailed the feeling of sheer velocity and intensity of what it would be like to control Superman, and fans could easily just spend hours upon hours just zooming through the streets and roads. The developer has also added a few neat touches here and there that just alleviate the experience to another level – with subtle details like how the character takes a very brief pause before zooming and how his feet keep flip-flopping while flying through the air.

Furthermore, there are a few flight tricks that players can do to mix things up. For instance, you can jump while in flight to gain height, you can dive to lower your height, and you can also do a dodge roll to quickly change lanes while flying. Last but not the least, you can also perform a dive bomb to the ground once you are done with skirting along city skyscrapers and highways. All of these moves have appropriate animations that all blend in seamlessly with each other, which culminates in a presentation that can easily pass as an alpha version of a proper AAA game.

But sadly, Superman Flight Experience isn’t a AAA game. It’s not even a proper game for that matter, it’s more of a proof-of-concept in that regard. Apart from flying around and exploring the city environments, there isn’t much that one can do with the game. The game doesn’t feature any combat scenarios, flight challenges, or pretty much anything in the name of content. That’s a shame because Tyson-Butler-Boschma has really nailed the core experience of a full-fledged AAA Superman game. 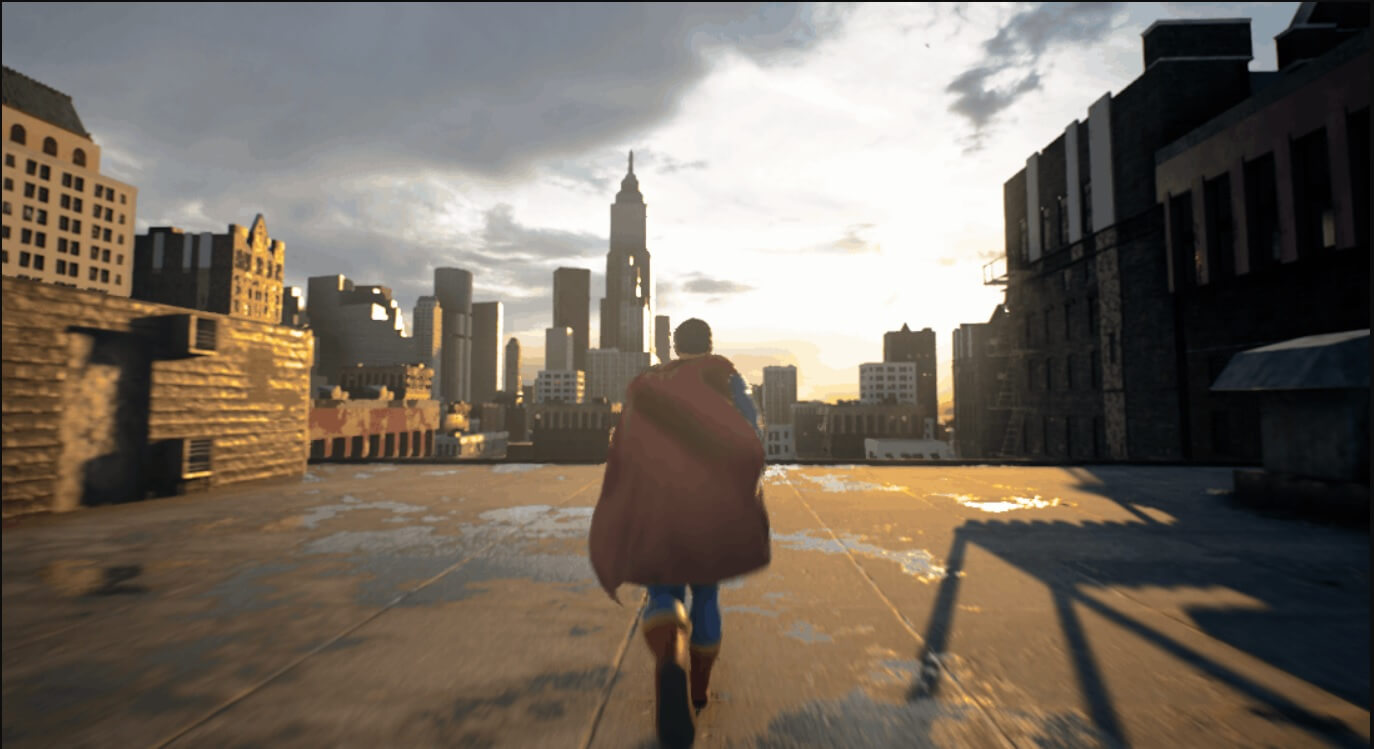 Given the fact that this mod is developed by a single developer, it isn’t surprising that Superman Flight Experience isn’t the most technically stable or optimized. Unreal Engine 5 can be pretty taxing on system resources, and the case very much stands true for this mod as well. Interested fans will be needing a pretty beefy rig to even have a shot at running the game. The footage that the developer has posted is recorded on a system with an RTX 3090 graphics card, and there are still significant frame drops when the character starts moving too fast. Furthermore, issues such as audio randomly cutting out, the cape clipping through the body, and even the game crashing are pretty much rampant throughout the experience.

The developer has also confirmed that he isn’t interested in building this project any further. That sentiment is largely understandable since the character model is highly derivative of Superman – which comes with a risk of copyright infringement. Secondly, the developer Tyson who is also the founder of Toybox Games – is currently hard at work on the studio’s upcoming action-adventure title Primordialas: Fireborn.

That said, any other interested modders can also take these foundations and build even more functionality on top of it for more varied experiences. However, this will take time – and fans shouldn’t expect a full-fledged game coming out of this concept.

It’s also really fascinating how a single developer was able to figure out to properly implement a Superman flight experience in a video game. Again, this is an area where multiple developers have failed to hit the mark time and time again. Of course, this also speaks volumes about how far game development technology has come – and how state-of-the-art next-gen engines like Unreal Engine 5 allow for rapid development with high-quality assets in a small duration of time.

What the future holds for Superman in the realm of video games is anyone’s best guess at this point. But now that game engines like Unreal Engine 5 have solved a long-standing problem of rapid asset streaming for a fast-moving character like Superman, developing a proper AAA game with this level of macro and micro detail shouldn’t be much of an issue – more so with the fact that both current-gen consoles come equipped with high-speed SSDs.

We would really like to see a AAA Superman game from developers like Rocksteady and Monolith, as they take their learnings from past outings and morph them into something that would work well within the context of a Superman game. Of course, that’s just wishful thinking on our part – and without any official announcements of such a game at this point, this Superman Flight Experience is all that we have. So we’ll take what we can, I guess.