Posted By George Reith | On 20th, Jul. 2012 Under Reviews | Follow This Author @GNReith

Tony hasn’t aged well in recent years. Not even slightly, with Tony Hawk’s Ride and Shred effectively destroying the franchise as we knew it. Having finally accepted that the modern THPS games were really rubbish, Robomodo have done the semi-honourable thing of remaking the older titles in an attempt to bring back the Tony Hawk magic of yesteryear. More of a compilation of THPS 1 and 2 rather than a straight remake, Pro Skater HD is equal parts endearingly retro and frustratingly archaic. The lack of modern skating conveniences is a subjective issue that could easily be forgiven, but the omission of various THPS multiplayer necessities of old is a real crime that severely degrades the game.

The single player content is the same as it most likely was in your youth. You choose your favourite skater and cruise around levels racking up big scores, getting SKATE letters and other collectibles and finding that all elusive secret tape. Oh wait, scratch that last one, as they’ve attempted to make it a secret DVD in order to keep THPS with the modern times. It seems like a silly effort to go to though, as the skating mechanics make great strides to stay fiercely retro. In some senses this is a good thing. Whilst modern skating games rely on analogue controls and dodgy peripherals, it’s nice to go back to the days when the Indy 900 was still possible and it was still right down square (or B as is the case on 360). There is a certain charm to returning to the mechanics of old, a nostalgia that THPSHD actively forces out of you. 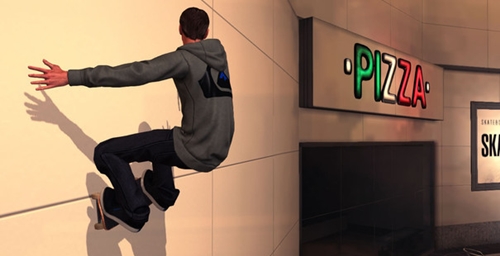 So wall rides make the cut, but reverts don’t? How does that work?

There is a problem with these retro design choices, however. Whilst it’s great to be rid of some of the crap that has weighed down the THPS games over the years, there are many essential skating tools that have been forgotten in the attempt to wind back the clock. I realise these weren’t in the original THPS 1 and 2 but, as a re-imagining of the old Pro Skater games, there really should be reverts and transfers. It does somewhat limit the combos you can pull off not having them there and, whilst you certainly get used to it, this kind of restriction can be frustrating for fans who loved milking flatland tricks in the later Tony Hawk games.

One thing they haven’t really touched though is the level design, yet this is actually a real blessing. Running through School 2 and Hanger again is a dream come true, and it’s a testament to the quality of the level design from back in the day. The roster comprises favourites from both games, and there are no low points whatsoever when it comes to the parks you can skate around.

So the single player stands as a refreshing reminder that is a double edged sword. It’s a shame the same mixed blessing wasn’t bestowed on the multiplayer. For a game that tries so hard to stay retro in its mechanics, there is no local multiplayer. I haven’t been this angry about a game in a while, but the lack of split-screen in THPSHD is an outrage. My fondest memories of the Hawk was trying to trash my friends locally, so to remove that is to take away what was arguably the biggest draw to the old Tony Hawk games. So yeah, online only, just like every other half-assed multiplayer game on the market. To its credit though, the multiplayer is fun when you get a good lobby going. The graffiti tagging and score attack modes are back, with a new inclusion that sees you tricking to keep your head from growing massive and then popping. It’s a hilarious addition, but that’s where it ends. The old Hawk games had much more variety in their multiplayer, and they also had one key feature that is missing: HORSE mode. Of course with no local multiplayer there can be no HORSE mode, but this was just the final straw for me. HORSE was the essential mode for multiplayer in THPS. I was really looking forward to trying to make it call my friends expletives once again, but no. That would be too much fun for us to handle, wouldn’t it Robomodo? 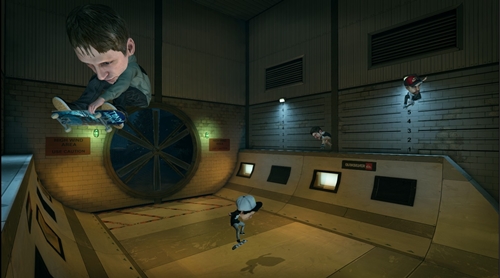 Big head mode is fun, but it can never make up for the lack of split-screen and HORSE.

Rant over, for there were some awesome elements from the old games that did make it back in. The big one for most people will be the soundtrack. Though many songs have been swapped for newer models, the sounds of Goldfinger and Bad Religion still made the cut and damn straight too, as it wouldn’t really be a THPS remake if Superman wasn’t playing in the background at some point. The sound effects too are still as you remember them, offering a nice parley between visceral and comic.

The graphics offer a similar sheen, with crisp models and decent texture detail effectively bringing the sights of School 2 and co into the modern day. The animations are also slick overall, though the bail animations are awful, often falling through textures and hovering at random. It’s a shame, as these were always so amusing in the original games. The other big change is the character models, now updated to reflect the skaters as they are today. It sure takes time to get used to seeing a balding Tony Hawk on screen, but you get over it eventually. 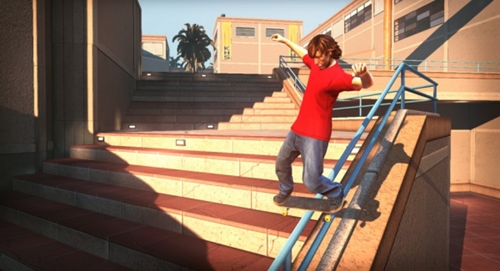 As for longevity, there’s enough to keep you busy in the single player mode, and achievement hunters will be glad to hear that the list is challenging without being to over the top. Of course, the lifespan would be greater if there were more multiplayer options, but alas it was not to be. All in all THPSHD offers a fun nostalgia trip, even for the many times where it will frustrate. For 1200 MS points though, it’s hard to recommend to all but the most dedicated Hawk fans. For those of us who grew up with THPS 1 and 2 it’s as simple as this: No HORSE, no split-screen, no sale.

Sketchy animations, No HORSE mode, No local multiplayer, Sometimes too retro for its own good, Limited game types

An HD re-imagining of the first two Tony Hawk's games, Pro Skater HD mixes pleasant nostalgia with the archaic design that comes with it. The lack of split-screen is a devastating loss though

A copy of this game was provided by developer/publisher for review purposes. Click here to know more about our Reviews Policy.
Tagged With: activision, robomodo, tony hawk's pro skater HD, XBLA, xbox 360