Soul is absolutely gorgeous. If you’re really into drawn art than you will love the visuals of this game. Although it’s not terribly spooky, there is no getting past the idea that you are in fact a soul. The vibration of the control is a heartbeat as you play which plays a minor factor in setting the mood for a late night freak out session. 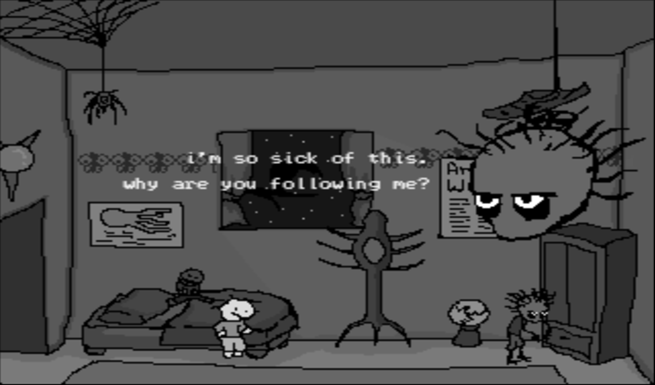 Uin looks and feels a bit dated but for some reason it creeps me out. It reminds me of something set in the world of Salad Fingers. It’s really just an odd game and to be honest the art although terribly simple is effective to give you the Goosebumps.  As if it wasn’t enough, Uin has a very spook filled audio section; don’t plan on this being just a regular old plat former. It’s mostly just completely odd, so if you like abstract games don’t miss out.

Decay is a point and click title for the Xbox 360, and its nothing short of ominous. If you like stuff like silent hill with puzzles and such, that you will probably find a bit of liking to Decay. Assuming you are into the game play similar to Myst. Overall there are some creepy things happening in this game and its worth exploring if you’re looking for a cheap spook.

Just a spectacular idea of a character that plays with echo-location, this means that you see with sound waves. This game gives out some seriously creepy vibes, even though it doesn’t have any type of real visual horror. The audio is scary, there is no way to sugar coat it. The Devils Tuning Fork will seriously creep you out in a dark room by yourself.