Total War: Three Kingdoms, at least for me personally, has been in an interesting spot since release. The Romance of the Three Kingdoms story with its grand politics, complex tales and emergent narratives provided a unique spin on top of the tried and true combat. This was further aided by stellar presentation in the form of a water color aesthetic, great voice-acting and powerful music. However, it lacked that special something to properly hook me. Mandate of Heaven is thus an interesting expansion, being the title’s largest till date while introducing several new mechanics and systems to mix things up. So how well does it succeed? 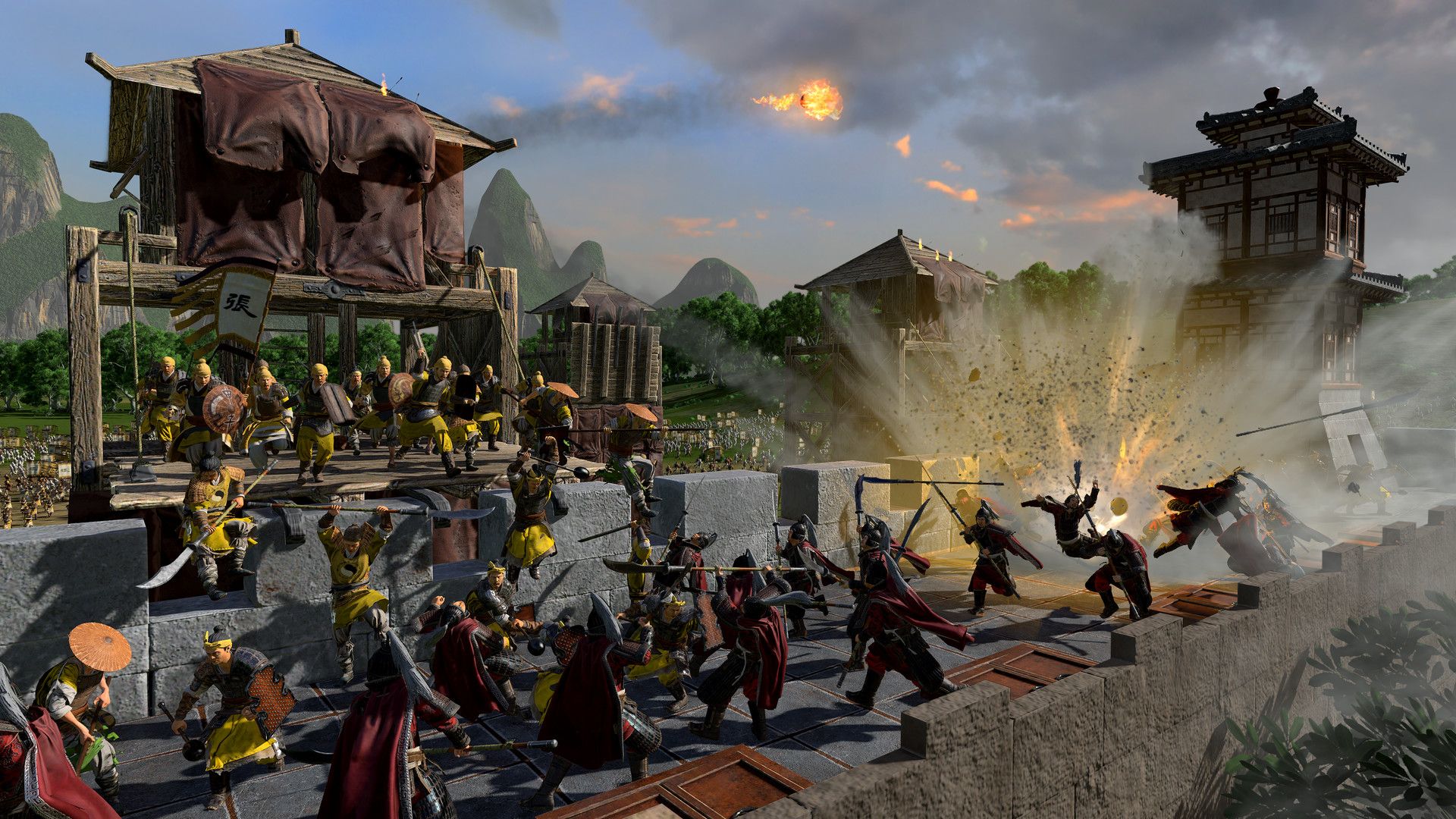 "Don’t be surprised if Dong Zhuo suddenly shows up to declare war on you or if Zheng Ziang of the Bandits starts causing trouble years down the line."

Story-wise, Mandate of Heaven takes place several years before the events of the base game. China is falling apart, suffering from food shortages. Meanwhile, the Han Empire has multiple parties in The Imperial Court demanding their respective pound of flesh. Emperor Liu Hong struggles to keep things in check while also managing the nation. If that weren’t enough, three brothers – Zhang Jue, Zhang Liang and Zhang Bao – band together and start the Yellow Turban Rebellion to dismantle the Han Empire. Several other major players are making their move, including the soon-to-reviled Dong Zhuo. Who will emerge victorious and establish the one true ruling dynasty?

Much like the base game, Mandate of Heaven is about expansion, diplomacy, resource management and, when, necessary warfare. Throughout the course of the game, in-game events may influence your fortunes or affect your course – such as stopping to aid a village suffering from famine at the cost of losing movement points. Alliances are made and broken; even among close relations that will follow you to the end, some manner of compensation – financial or otherwise – is a given. Other interesting events may occur under specific conditions as you slowly segue into the base game’s time period. So don’t be surprised if Dong Zhuo suddenly shows up to declare war on you or if Zheng Ziang of the Bandits starts causing trouble years down the line.

One of the more promising features of the expansion is offering new ways to play. When playing as the Han Empire, you can choose Liu Hong and prioritize administration and diplomatic relations to maintain your hold while building the Imperial Palace to receive strong bonuses. Alternatively, you can go with Liu Chong to get into the thick of things, receiving Fortitude in battles to boost troops or unlocking Trophies by accomplishing different tasks for additional buffs. While these are appealing enough, arguably the most interesting mechanic belongs to the Yellow Turban Rebellion. 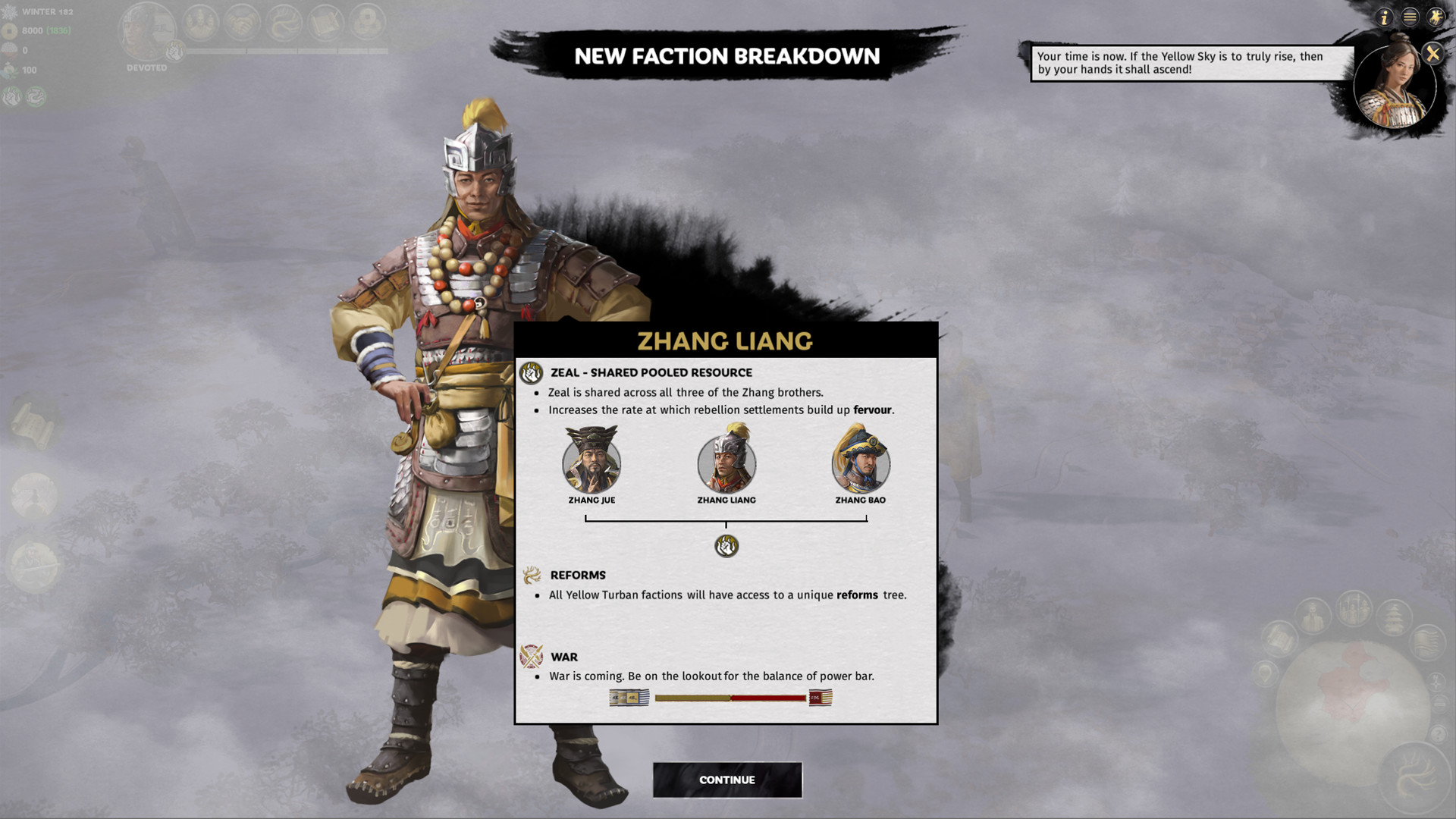 "Considering how much work other regions have to do to maintain public order, it feels like the trade-offs for the Yellow Turban Rebellion aren’t nearly as bad when weighed against the benefits."

Along with having new reform trees, each Yellow Turban Rebellion member utilizes Zeal and Fervour. Zeal is attained by warring and capturing towns, mines, farms, anything that is occupied by another faction. As Zeal grows, the rebellion will gain momentum and cause other neighboring regions to destabilized. This is Fervour and will result in public order disruption for different factions going. Then you have the different abilities of the Zhang brothers – Zhang Zue specializes in healing, Zhang Bao has a tendency to lead the charge in battles and Zhang Liang favours defensive measures.

So if you’re someone who believes in conquering neighboring territories and constantly expanding through conquest (without burning everything to the ground), Zeal and Fervour create the feeling of a snowballing movement. As you conquer more, so will other regions look to join your cause while rival factions struggle to maintain order. It’s a fairly interesting feeling to see China plunged into such a chaotic state as Yellow Turban-controlled regions pop up everywhere.

Of course, there are some drawbacks. Pretty much everyone is your enemy and if you slow down in your conquest and warring, then other regions may be inspired to join the Han Empire as Zeal diminishes. Then again, sometimes it felt like Zeal and Fervour were a little too good. Considering how much work other regions have to do to maintain public order, it feels like the trade-offs for the Yellow Turban Rebellion aren’t nearly as bad when weighed against the benefits. 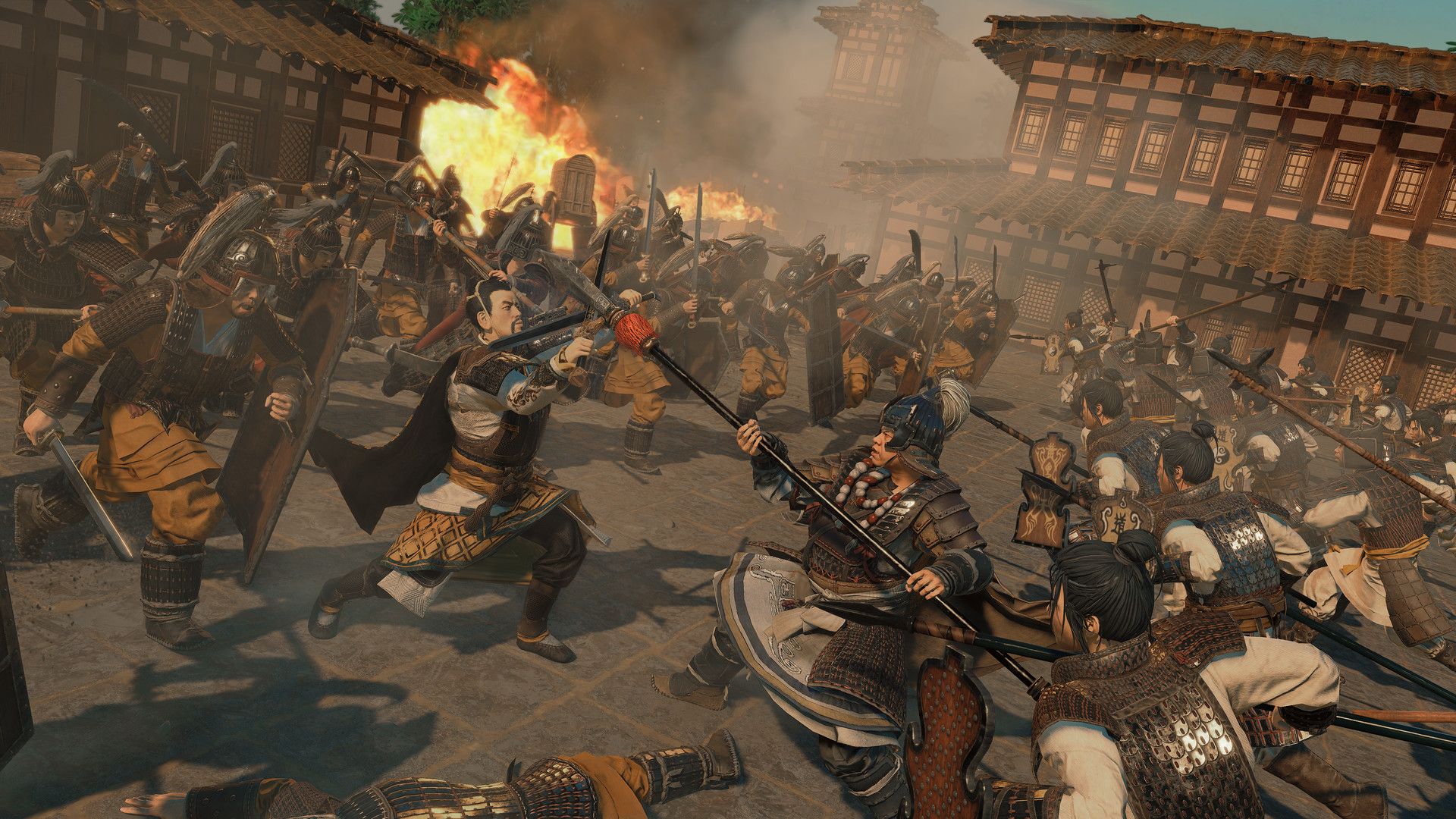 "While being able to play as different warlords in different points of history, exploring their backstories in the midst of the Han Empire’s imminent fall, is good, the landscape just ends up feeling too familiar."

Otherwise, in the combat department, this is more less the same Total War: Three Kingdoms that you’ve been playing till now. Some new units like the Tyrant Slayers and Messengers of Heaven put a few wrinkles into the mix with the former having bonuses against heroes while the latter are good at taking down archers and the like. The new units don’t feel particularly ground-breaking overall – you’d be hard-pressed to see too much difference from the base game’s units and their effectiveness, especially when a massive skirmish breaks out. But the nuance and variety is appreciated all the same.

Duels are still a thing and feel a lot more polished than at launch but will likely attract your attention for a few moments before you move on to more pressing matters. One of the new features, Deployables, sounds good in theory as you lay down sharp stakes, set up towers for your archers and even place oil to light unsuspecting units ablaze. Unfortunately, along with requiring hefty investment, you’ll get along just fine without them.

It’s also worth noting that this DLC reflects some of the drawbacks of the Chapter Pack approach that The Creative Assembly has taken. The map is more or less the same as the base game. While being able to play as different warlords in different points of history, exploring their backstories in the midst of the Han Empire’s imminent fall, is good, the landscape just ends up feeling too familiar. I can only imagine how strong that feeling of deja vu will be for hardcore players who have stuck around since launch. 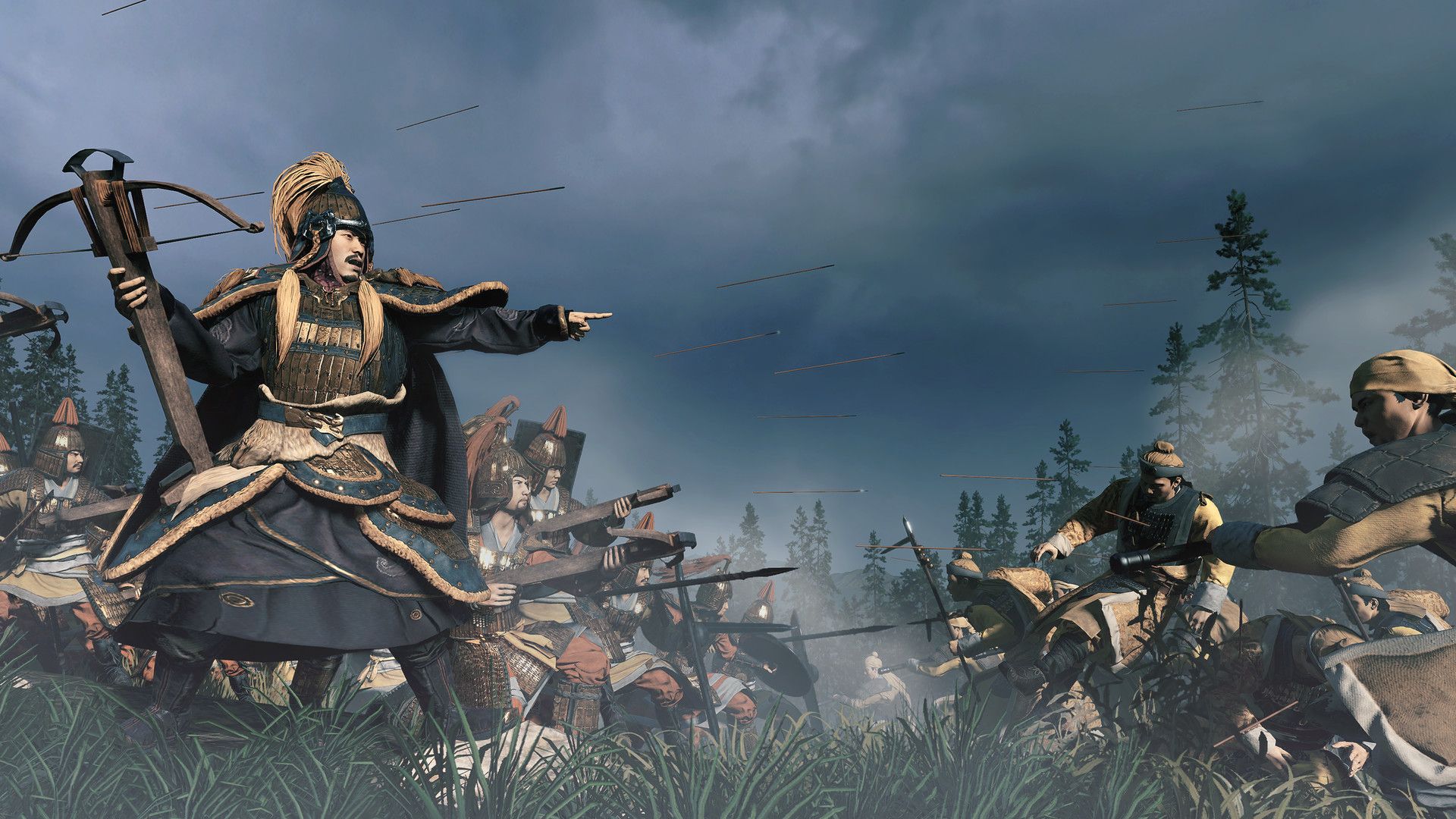 "Overall, Mandate of Heaven is a solid expansion, offering a significant amount of new ways to play while sticking to that core combat loop."

Then again, there is quite a lot to like and the production values are as on point as ever. The soft visuals still look impressive and the gentle atmosphere during the expansion stage is an excellent contrast to the collision of massive armies during battles. The animation quality for each unit is still incredibly polished and distinct even when things descend into chaos. Some of the new heroes are pretty cool in terms of their unique units and overall playstyle. The variety of different playstyles for each hero and faction is also nice even if the Yellow Turbans need some balancing.

Overall, Mandate of Heaven is a solid expansion, offering a significant amount of new ways to play while sticking to that core combat loop. For all intents and purposes, it’s worth diving back into the Three Kingdoms era, whether it’s to fight against all hope to keep an empire afloat or to be the catalyst to watch it all fall. But one has to wonder if bigger, more sweeping developments are in the works.

World map still roughly the same as the base game. Deployables aren't all that appealing from the outset. Zeal and Fervour feel somewhat unbalanced. Combat is still more or less the same despite addition of new units. Unexceptional as a whole.

Final Verdict:
GOOD
Mandate of Heaven may not be a total overhaul to the series' formula but it still offers a lot of new things. The familiar map and lackluster new units are offset by the entertaining new styles of play, new heroes and interesting events. Definitely worth checking out if you've been itching to get back into Three Kingdoms.
A copy of this game was provided by Developer/Publisher/Distributor/PR Agency for review purposes. Click here to know more about our Reviews Policy.