DLCs are a tricky thing to create, especially one that actually enhances the overall single-player experience by adding worthwhile new content. It shows the determination of the developer to keep supporting the game by releasing such content which meet or exceed the quality of the base game. Trine 2, which was a spectacular audio-visual experience, was also quite short–and you could possibly finish it in 7 odd hours.

This new DLC for the game, titled Goblin Menace, adds six new levels to the game along with a bunch of abilities to each characters. You must remember the Thief, Wizard and Knight–the three nicely designed characters who you can use to clear levels and can use any of them by just switching through them.

Trine 2’s levels were designed spectacularly, and was such a treat for the eyes, with spectacular art design shining through. It was a gorgeous game and one that was glittered with clever puzzles, which made it not only challenging but quite fun to play as well.

I’m pleased to say that these new levels are quite good and are built at the same high quality you have come to expect from Frozenbyte. This DLC will take you approx 3 hours to complete, and features a lot of interesting levels which takes you inside the belly of the beast and other uniquely designed ones that will make your jaw drop.

Six levels does not seem like much, but hey, it’s the quality that counts right? There are also new powers available to your characters including one called the anti-gravity bubble, used by the Thief. What this does is give a slo-mo effect to anything and everything that is in range, including enemy projectiles. You can also use it to reach difficult places since you’ll be basically jumping higher due to the less gravity. Other characters also have stunning new abilities. 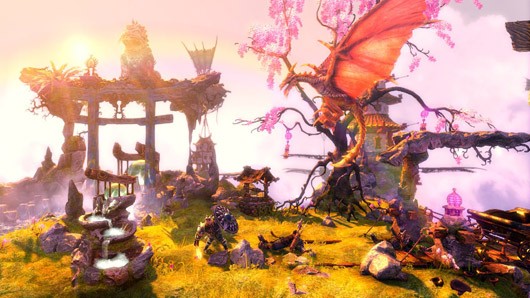 Of course, it’s easy to get stuck in the game. The main game gave me nightmares but I was able to power through it. Goblin Menace DLC features some neat puzzles too which will test your thinking ability to the max, and as a side expansion pack, I couldn’t ask more from it.

It has good production values, features high quality content and is something that actually enhances the base game by adding abilities which can also be used to replay the entire game. I heartily recommend picking this DLC up if you are starving for more well made levels. It’s worth the money.

Good production values. Well designed levels and abilities. The new abilities can be used in the base campaign.

DLC was released a bit too late. Could have added more unique things to the DLC.

Final Verdict:
SUPERB
It has good production values, features high quality content and is something that actually enhances the base game by adding abilities which can also be used to replay the entire game. I heartily recommend picking this DLC up if you are starving for more well made levels.
A copy of this game was provided by Developer/Publisher/Distributor/PR Agency for review purposes. Click here to know more about our Reviews Policy.