It’s always heartbreaking to play (and then review) a licensed game. Here you have the chance to build a fantastic game based in an established universe, so that you’re spared the tasks of developing a story and characters for your game, and can concentrate on building and refining core gameplay concepts that adequately transfer the concept of he source into the game. And yet, we have found that with few exceptions, licensed games have never worked out- for every Goldeneye 007 or Star Wars: Knight of the Old Republic that we’ve had, we’ve also had duds like E.T and Superman 64 (with the former being so bad that it is actually seen as the reason by many today for the 1983 crash of the video game industry).

So actually, one really shouldn’t hold any expectation going into a video game based on a movie or a book- precedence dictates it’s probably not gonna be good, so why bother raising expectations only to have them predictably crushed later? And yet, I still can’t help feel a pang of disappointment at how Tron Evolution, the video game tie in to the upcoming Tron movie (which actually isn’t based on the movie itself, but acts as some sort of interquel between the two movies), has turned out. Here, by all means, is a game that should have been good- not only is it set in a working, established (albeit largely forgotten by now) universe, but said universe is also primarily about video games.

And then there’s the simple fact that Tron does an extremely good job at posting great initial impressions- nice graphics, atmospheric sound design, a solid gameplay base that does a good job of mixing the free flowing fluid platforming of Prince of Persia with the combo chaining combat of Batman: Arkham Asylum, along with an intriguing multiplayer mode, Tron Evolution looks like one of those rare flashes of brilliance that tie in games sometimes display. However, those initial impressions soon fade away, to be replaced by a feeling of growing disappointment, that is only compounded when one looks at all that Tron does right, and longingly thinks of how the game could have been, as opposed to how it turned out eventually. 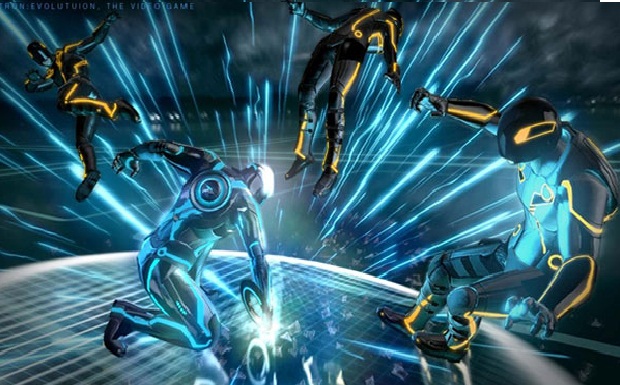 Tron Evolution is set in the nearly thirty year long gap that separates the stories of the two movies. It attempts to, in essence, retcon the story of the second movie with the first one, although only veterans of the first movie will truly be able to understand what’s going on. The game liberally references terms and events that make no sense in any context until the player is familiar with the story of the original movie. Considering that the original movie released in the 1980’s, the chances that many in the modern video game playing audience will have truly watched it are slim, even if the original movie is a ‘cult’ movie.

This is a fairly large oversight on the part of the developers, especially when one considers that this video game is supposed to represent Disney’s efforts at expanding the Tron franchise. To the average player who is unfamiliar with the movies, this game will stop making any sense about fifteen minutes in, and the player loses any motivation to actually play the game, experiencing a disconnect with its story.

For fans of the movies, however, this game is a treat. As it tells a complex story that is primarily set in the Purge of the ISOs (in the aftermath of which the new Tron movie is set), it builds up a compelling narrative with many genuinely WTF moments, including the death of a major and beloved character, that all in all do a fine job of making the player excited for the second movie, even if he wasn’t excited already. 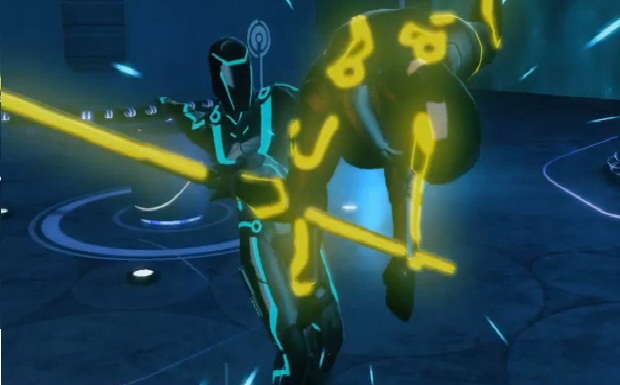 Excellent combat (at least at first) dispel any misgivings one might have had about Tron.

Unfortunately, though, there is also the fact that the second movie more or less renders the need for the game obsolete from a purely narrative point of view. As it turns out, most of the events detailed in the game aren’t all that important for the movie, and those that are are given the spotlight in the movie. While this certainly has no effect on the game itself, it does make a fan feel betrayed, making the game seem like a cynical cash in, and it also betrays the mentality that must have gone behind the development of the game- try and sell, possibly expand, the Tron universe, but make it as safe as possible. Take no risks.

The sad part is, the game could have been so much more, something that is reflected in the game’s design. The gameplay of Tron Evolution includes some genuinely compelling new ideas and concepts, that would have elevated this game to an altogether new level had they been properly implemented. As it stands now though, they feel half finished and unpolished, which acts as a major buzz killer as far as this game is concerned.

Take, for instance, the way this game deals with health. Within the Grid, you can regenerate your health any time you want to by running along the grid’s line. This actually ends up adding an added layer of depth to the combat, as you try and not only evade your quarry and strike him yourself, but also try and regenerate your health without getting detected until the final minute. This, along with the genuinely compelling combo based fast paced action game combat that Tron boasts of, serve to provide the game with a solid foundation.

The problem is with patchy execution- having a solid formula is all well and good, but what good is it if it doesn’t play well? In Tron, the enemy AI is generally poor- while the computer players do a good job of responding to your combative actions, such as immediately throwing their own diskettes as a response to your ranged attacks, they seldom react to anything else you do- thus, if you try to regenerate your health mid battle, you’ll find there to be no problem. If you use your environment for an attack (which the game allows), you’ll find the battle easy going… assuming you can wrestle with the controls successfully, of course.

This brings me to Tron’s greatest problem- under the extremely solid gameplay foundation, and under the lack of polish and finesse, under the poor AI, Tron’s controls are fundamentally problematic- they are floaty. For a game that demands such high precision combat, and worse still, high precision platforming, as Tron, floaty controls represent a significant problem. Many a time will a player find himself falling unexpectedly to his death, simply because the game failed to respond to his button pushes. So many times mid combat, the player will suddenly realize he has initiated a move or an attack that he didn’t mean to, again because of the controls.

Such errors abound, and they take away more from the game than any creativity or ingenuity that it exhibits could possibly add to it. Sure, the game has great combat- but why is the enemy AI unable to keep up? Sure, the game has a great story- but why is it told poorly, why is there a noticeable transition from the cutscenes to the game screen? Sure, the game has tight platforming. But does it matter when the controls are floaty? Definitely, the upgrade system is well thought out and done- but when the game can be won by simply spamming your attacks, why bother? And quite honestly, the game’s multiplayer mode is simply genius… but why is it so repetitive eventually? 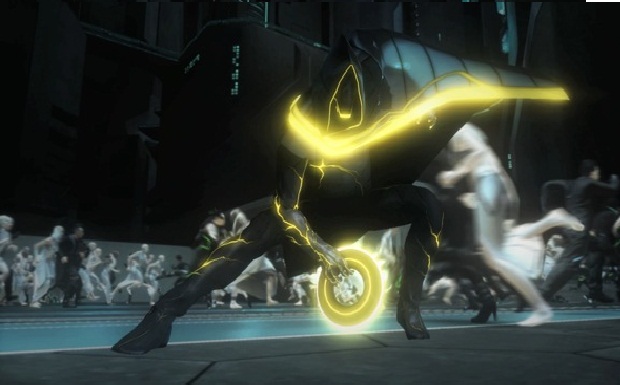 Unfortunately, Tron has simply too many issues to ignore, and can safely be filed under the ‘Almost, but not quite’ label.

Everything that is good about Tron is negated by a larger, more insurmountable problem. It’s a game that stands on a solid foundation, but on that foundation is a straw house that someone built in a great hurry- a slight strain, and the house collapses. Sure, the foundation is still there, strong as ever, but without the house, what use is it?

Ultimately, that is what Tron Evolution truly is. It has its has its heart in the right place- it’s an action game with some genuinely compelling new ideas, and a story for hardcore fans. Unfortunately, poor execution ensures the game is never as good as its potential indicates. Maybe if there is a sequel one day, it’ll make good on this one’s potential. But seeing how many times I’ve burned my fingers hoping for licensed games to turn out well, I refuse to burn my fingers one more time.

Note: We had received this copy from the Publishers.

Floaty controls, bad camera, CGI to in game screen transition jarring, story only for fans of the original movie

Tron Evolution has its heart in the right place- it's an action game with some genuinely compelling new ideas, and a story for hardcore fans. Unfortunately, poor execution ensures the game is never as good as its potential indicates.

A copy of this game was provided by developer/publisher for review purposes. Click here to know more about our Reviews Policy.
Tagged With: disney, Microsoft, ps3, sony, Tron Evolution, xbox 360