Twin Mirror tells a story that struggles to surprise but still works where it counts.

The psychological thriller video game genre might not ever have the mass appeal of more popular action-oriented titles, but when done right it can really hit home with players who give it a chance. Games like Detroit: Become Human and Life is Strange have more than demonstrated the heights a narrative-driven adventure game can soar to when handled well. Seeing that Dontnod Entertainment developed the latter, you would think they would have something spectacular in store for fans of these sorts of games with Twin Mirror. Yet, while I enjoyed most of my time with it overall, I wouldn’t be able to look at myself in the mirror if I told you it surpassed their previous games.

Being from West Virginia myself, I can personally attest to the accuracy with which the old mining town aesthetic of Basswood was created here. Everything, from the vast wooded hills down to the cracked pavement of old roads that aren’t traveled enough to warrant regular repair feels right. This makes Twin Mirror’s outdoor areas its most interesting by far to me. The town of Basswood is full of faded buildings, dusty windows, grass and ivy creeping up from under old concrete, and the occasional well-intentioned graffiti. The town, like so many others from the region, genuinely feels like it harbors memories of a happier time but now barely clings to the last few threads of its former vibrancy.

"Being from West Virginia myself, I can personally attest to the accuracy with which the old mining town aesthetic of Basswood was created here. Everything, from the vast wooded hills down to the cracked pavement of old roads that aren’t traveled enough to warrant regular repair feels right."

Adding to the authenticity are Basswoods citizens; all with their own idiosyncrasies and quirks that take generations of life in a small, isolated town to form. The characters and setting were clearly created with a deep understanding of and sensitivity to the real issues that many towns like Basswood deal with. The dying coal industry, the opioid crisis, and how the former feeds into the latter are depicted without lazy stereotypes but instead, thoughtful nuance. Individuals are different, but the town’s troubles weigh heavily on everyone making some more closed-off and bitter than others with short tempers and long memories. The folks that Twin Mirror’s protagonist, Sam Higgs, talks with are all consistently well written and acted.

The only thing holding them back is their less-than stellar facial animations and somewhat mediocre amount of detail, both of which often rob the story’s more significant moments of the impact they were going for. A slightly more than excusable amount of texture popping and many objects, when held, awkwardly clipping through characters hands only add to the cracks of Twin Mirror’s otherwise well-executed gameplay and cutscenes. These visual hitches shouldn’t be a deal-breaker for anyone who enjoys a good story, but they do create a lower ceiling for the atmosphere than it deserves.

The soundtrack, while not outstanding, does help save some of the moods that the visuals seem determined to undercut. Whether it’s the impassioned orchestral chord progressions that accompany uncovering a major plot point or the light-hearted bluegrass playing in a humble coffee shop, the music generally gets it right.

Sam Higgs ends up being a far more interesting main character than he appears at first. He’s a flawed guy who has a tendency to give into impulse, and a bad habit of asking imposing questions when it’s not entirely appropriate. It’s a great personality type for his chosen profession in journalism, but not so great for getting along with everyone in a small town. The game often reminds you of Sam’s checkered reputation in the town with folks seeming divided on him due to the critical nature of a scathing article he wrote about Basswood’s last remaining mine failing to follow regulations. You can tell this weighs on him with every shop he enters, not always knowing if he’s walking into a friendly or hostile environment. 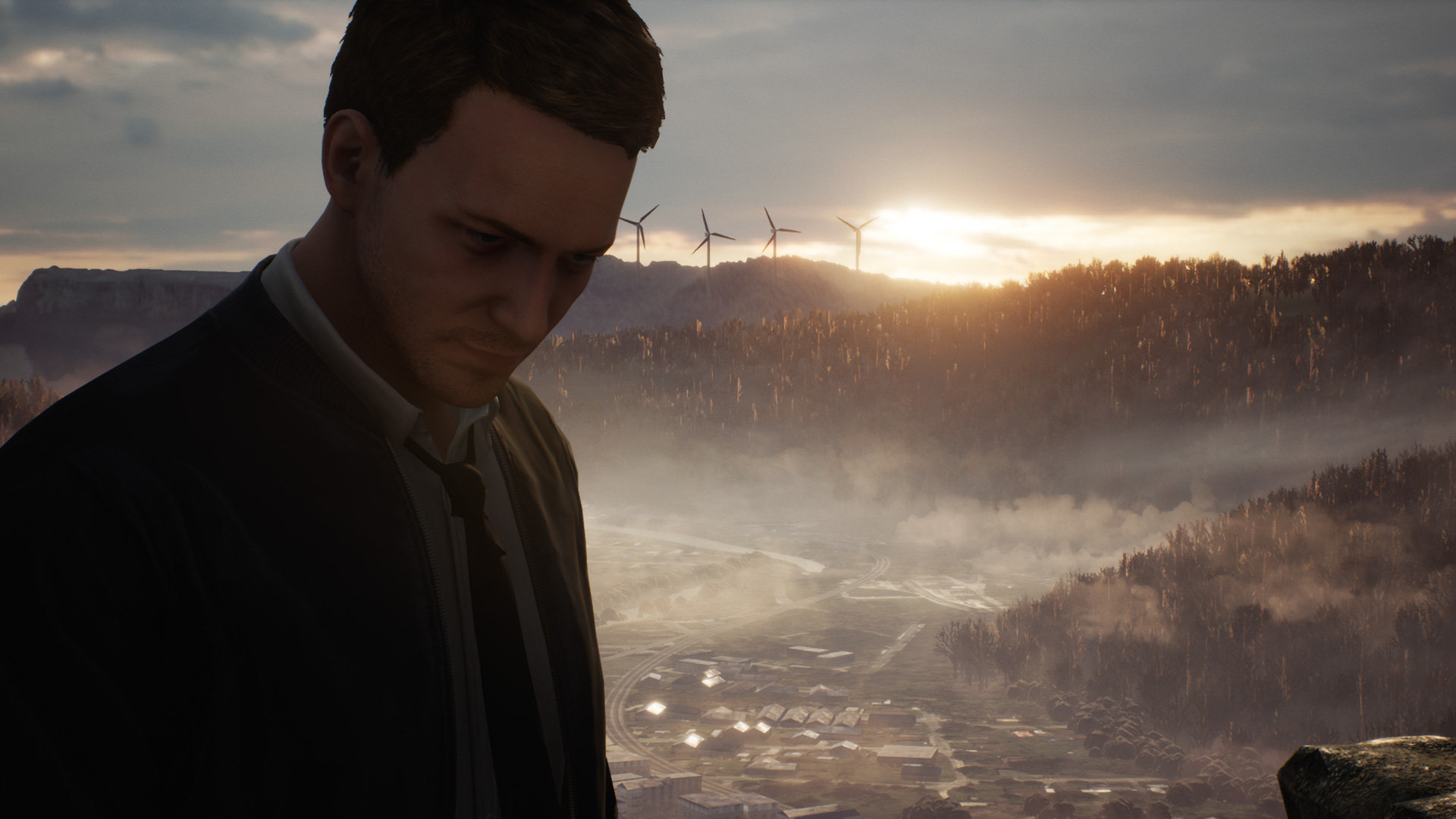 "Sam Higgs ends up being a far more interesting main character than he appears at first. He’s a flawed guy who has a tendency to give into impulse, and a bad habit of asking imposing questions when it’s not entirely appropriate. It’s a great personality type for his chosen profession in journalism, but not so great for getting along with everyone in a small town."

Some characters genuinely love Sam and are excited to see him again and some have an axe to grind. Some characters have personal history with Sam and some only know him from his work. These dynamics constantly come into play with how Sam’s newest investigation unfolds and is made all the more intriguing by an imaginary alternative version of himself that helps him sift through stressful situations despite many of their exchanges becoming a nuisance to Sam at times. This alter-ego character ends up being one of the games’ most interesting and perhaps illustrates Sam’s delicate mental health better than any other aspect of the game. It all adds up to a finely told story that gets its hooks in quick despite mostly being a bit of a slow burn and definitely on the predictable side.

I do feel a game like this is best experienced with as little plot knowledge as possible, so I won’t go into it much more than that. But suffice it to say, if Sam’s return to his hometown to attend an old friend’s funeral went perfectly as planned, we wouldn’t have much of a reason to play a game about it, would we?

While it is obvious that most who remember Sam have their reservations about him, how much he offends or pleases the people of Basswood on this particular visit, is often up to the player, as there are a lot of dialogue options that can nudge most situations into different directions. It’s standard fare for Dontnod games and the genre generally. Some choices are more consequential than others and it’s generally illustrated to you when you are about to make a particularly monumental choice. They’re done well enough that you’ll be more motivated to give in to the experience and see where your instincts lead you than trying to figure out the game’s inner-workings, which I suppose is the point of this type of game. Characters are all nicely catalogued for you in status menus that lets you keep track of Sam’s relationship with them. It’s fairly inconsequential, but it’s there if you want it.

The dialogue and exploration segments are just the bread of Twin Mirror’s gameplay sandwich though. The meat is mostly made up of puzzles where Sam must assemble important past events – or plot new ones – by analyzing evidence and piecing possibilities together to see how scenarios might play out. These investigative sections are mostly pretty fun to complete. While games like Detroit: Become Human arguably did them better, Twin Mirror does do a better job with them than I expected it to. The way Sam considers each possibility you construct with evidence around him makes his train of thought amusing to unfold, even when your first few hypotheses are wrong. Some of these segments are more interesting than others, but they’re generally well-done and kept me invested in discovering and understanding the scenario instead of just trying to guess the correct combination of things to complete the section.

"The dialogue and exploration segments are just the bread of Twin Mirror’s gameplay sandwich though. The meat is mostly made up of puzzles where Sam must assemble important past events – or plot new ones – by analyzing evidence and piecing possibilities together to see how scenarios might play out."

Sam’s abstract mind palace is also a clever method of illustrating the connection between his memories, his mental state, and the present situation. Unlike the real-world event construction segments, the mind palace segments are much simpler to play through, and mostly amount to just very well dressed-up exposition. They shed light on the present by showing you something relevant from the past. The mind palace rarely gets more involved than that outside of a few minigames and a longer section towards the end. If these were presented in a different way they could have easily felt like padding, but given the clever nature of personifying Sam’s abstract thoughts, which is just as thought provoking as it is visually striking, it’s hard not to appreciate these sections for what they are.

Walking down intensely reflective platforms as shards of Sam’s memories materialize is quite eye-catching when contrasted with the benign, grounded locations of Basswood. Going between the two is an effective tug of war that keeps Twin Mirror interesting. The mind palace, combined with other interesting illustrations of Sam’s surprisingly entertaining investigative sections make the gameplay of Twin Mirror a worthy companion to the well-told story.

Twin Mirror is a game that has a lot to say about small towns, mental health, and the value of truth over popularity. It’s just a shame it doesn’t present those ideas with less technical issues or let them breathe a little more than the short 7-ish hour campaign allows. If you’re already a fan of narrative adventure games like this, I’d say you have more reason to check it out than not. But given Dontnod’s past work on great titles like Life is Strange and Vampyr, you also wouldn’t be wrong for finding Twin Mirror’s uneven presentation and smaller scope a little disappointing. That said, it’s still a mostly well-told psychological mystery that, despite its flaws, plays well and manages to deliver a story worth experiencing for fans of the genre.

Twin Mirror’s setting and story are portrayed with skill and reverence for the area it depicts. It forgoes stereotypes in favor of real-world drama that succeeds far more often than not with compelling detective gameplay.

While the game’s motives are noble, they are routinely obfuscated by distracting visual glitches, underwhelming facial animations, and a story that burns a little too slow to be as short as it is.

Final Verdict:
GOOD
Twin Mirror’s inconsistent presentation and short length contaminate its otherwise excellent story-telling and solid detective gameplay to a degree, but thankfully, it still manages to land on its feet as a respectable narrative-focused adventure.
A copy of this game was provided by Developer/Publisher/Distributor/PR Agency for review purposes. Click here to know more about our Reviews Policy.