UFC 2010 is nearly a carbon copy of the 2009 release. This is typical for a lot of sports games because it is hard to innovate year after year. Honestly they could have done a few things different. The theme music is the same, and even if it is the official theme song of the UFC, they should have used something else. With that being said I also strongly believe that if it is not broken, do not fix it. There are beautiful updates to the GUI and new online features that are not available in the demo. You also get four fighters instead of two like in the 2009 demo.

The tournament mode is cool and I literally spent as much time as I could to play every match up trying to get every inch of the demo in my head. Each character is based on their personal fighting style; this makes it hard to get comfortable. Just when you think you can defeat every opponent with power punching, you have to fight “Sugar” Rashad Evans who has a dominating ground game. In fact Sugar was the only fighter I was unable to beat on the hardest difficulty.

UFC 2009 was not easy to play if you turn the difficulty to hard and 2010 is no exception. Maintaining a very hard and quite steep learning curve, the ground game is what I always seem to lose to. It’s hard to best your opponent when there are specific ways to get out of certain positions. Especially on a harder difficulty when the computer can react to your moves at a very fast rate. 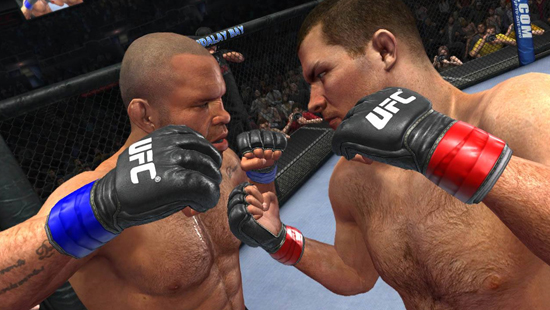 Great visuals, screenshot not from demo.

The best features of this game are the visuals. I have never seen modeling so good in all my life. These blow Fight Nights fighter models out of the ring. I honestly have played this demo more than 90 percent of the demos I have ever installed. It seems like they used the same knockout animation every time but this could be a demo feature. I would have rather them used a physics rag doll system for knock outs, but the pre-set animations do look realistic and believable.

I was a little creeped out looking at Rampage Jackson and actually believing it was him. The facial expressions on all of the characters are actually done to match how the fighters express victories and losses. There was a large amount of work done to make UFC 2010 much like watching actual UFC.

The cuts still look good and now you can actually get blood on your skin. I was actually quite shocked to see a bunch of blood on my characters chest and arms after a horribly gruesome battle. One issue that is still bugging me to the bitter end is that when a round ends, more often than not, a player’s face is reset to perfect with no cuts or swelling. I know that modern technology and high rates of income can insure the best in medical attention, but honestly this feels more like magic. 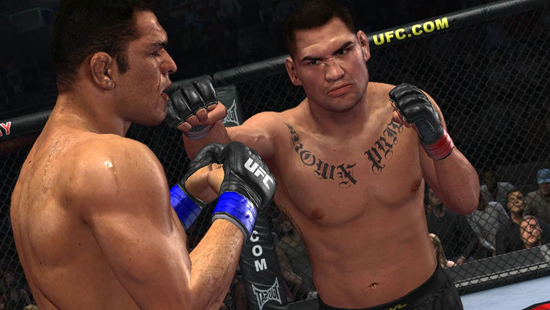 Another great screenshot. (not from demo)

There are new fighters that have been added since the last version of UFC, most of which coming from the Ultimate Fighter. You can now fight with people like Kimbo Slice and Big Country. This is probably one of the best updates seeing as that it’s just about the same game as 2009.

For the most part it felt like I was playing the older version with just a few new updates. UFC 2010 does boast new online features like being able to create teams and host online tournaments. These tournaments are hosted with standings on the UFC website.  It never gets old punching and kicking people in the head, and between UFC and Fight Night you can’t go wrong, if you are into realistic fighters than pick up a copy of UFC 2010. Download the demo first if you have never played though.