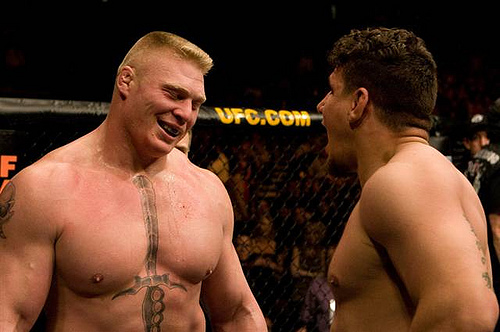 Brock Lesnar is in a contract with UFC. So when the news broke out that he was going to be in a WWE videogame, people were skeptical and thought, “Maybe, he want’s to wrestle in the WWE!”

That’s not going to happen because of contractual obligations and the UFC president holds a tight leash over him. Brock Lesnar was a legend in the WWE and held the WWE Championship for a long time at a young age. He left the WWE in 2004 and is now in the UFC.

We have a video where UFC president, Dana White is being asked about Brock’s presence in the WWE and he was pretty cool with it. Check it out and tell us what you think in the comments section below.