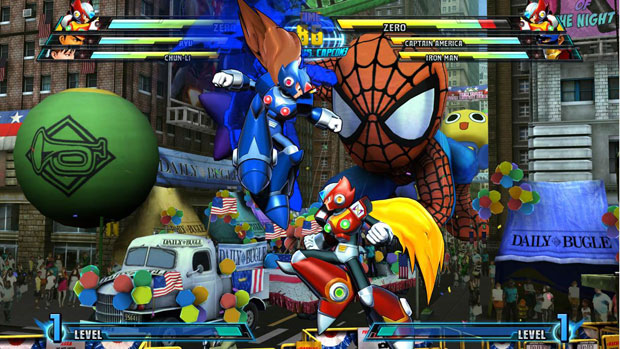 The highly acclaimed fighting series adds 12 new legends to the robust Marvel vs. Capcom 3 line-up, bringing the total overall roster of characters up to 50. This includes zombie-slayer Frank West on the Capcom side and cosmic defender Rocket Raccoon from the Marvel Universe. The new character options also include Phoenix Wright, Vergil, Nemesis, Strider and Firebrand from Capcom and Nova, Iron Fist, Doctor Strange, Ghost Rider and Hawkeye from Marvel.

Also, available as free downloadable content after launch, Heroes and Heralds is a new single player and multiplayer team-based mode where you unlock brand-new abilities with upgrade cards, customize your favourite character with new powers and compete in groups as either Heroes defending Earth from Galactus or as one of Galactus’ Heralds.

With multiple improvements and 12 new characters, Ultimate Marvel vs. Capcom 3 brings home the ultimate fighting experience for newcomers and pros alike.  The PS3 & Xbox 360 versions of the game both cost Rs 2499.