Ultimate Marvel Vs. Capcom 3 PS4 Review – And Then Came A Version Exactly Like Any Other…

Capcom continues the trend of bringing the previous fighting entry to bear before releasing a new title, but if you've never got in on this fight, it's still a great ride.

Seem like the new thing for fighting games this generation, before they can introduce the newest entry to the series on current platforms, they’ll bring a quick and dirty port of the last one to standard and make it available once again. While Capcom made sure not to pull a Street Fighter 4 and launch this 2011 port in such a terribly broken state, the game is 100% the hectic 3 vs 3 fighter you remember, that’s all it is. Exactly the game you remember.

Instead of treading old ground on what this game is about or how the mechanics work, as I feel its pretty well known by now, and our original review is still around if you’re unfamiliar. This is still very much faithful to the game it was last generation, including all the vibrant backgrounds, amazing characters and huge action that can seem daunting to new players. That said, fighting games have changed a bit in 5 years, and there are now some obvious holes where Capcom might have stepped in to make it more palatable. 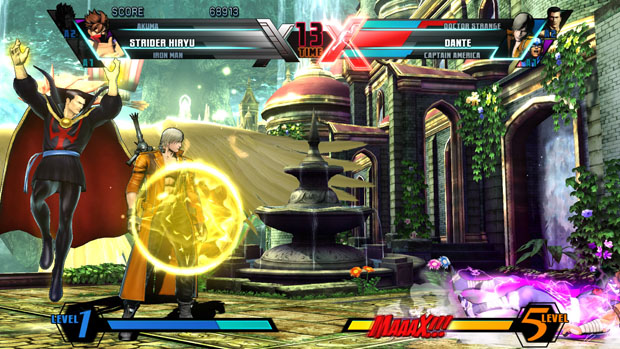 "The spectacle of the 3 on 3 clashes is as impressive as ever as huge combos chain seamlessly and particle effects bounce around from specials."

The basic fighting mechanics of Capcom’s Street Fighter series are turned up to 11, and mixed into an all star cast split between the huge names and obscure favourites of Capcom’s various video game properties and Marvel Comics huge universe. Out of the 50 fighters, there are some obscure inclusions that reward the core fans of either side who somehow knew about Firebrand or Shuma-Gorath without a Wikipedia trip, but knowing the story of each fighter isn’t really a roadblock. Capcom struck a fairly strong balance point at most levels of play with the original Ultimate rerelease, and it hasn’t been toppled here.

Having the benefit of far more powerful hardware has allowed Capcom to push the visuals just a little further by upping the resolution, maintaining the crucial frame rate without breaking a sweat. The spectacle of the 3 on 3 clashes is as impressive as ever as huge combos chain seamlessly and particle effects bounce around from specials. Movement becomes clearer with the resolution bump and the action is more easily readable. The various stages look nicer too, popping with colour and movement from the various background elements, all hiding even more fan service.

Though the simple control method is maintained that can allow new users to pull off huge moves with basic button presses still exists to help bring players into the game. Given the utter chaos a match can devolve into though, it’s really a shame that Marvel VS Capcom 3 doesn’t have any of the training options that are now ubiquitous throughout the genre, still only having the free training that it always had. 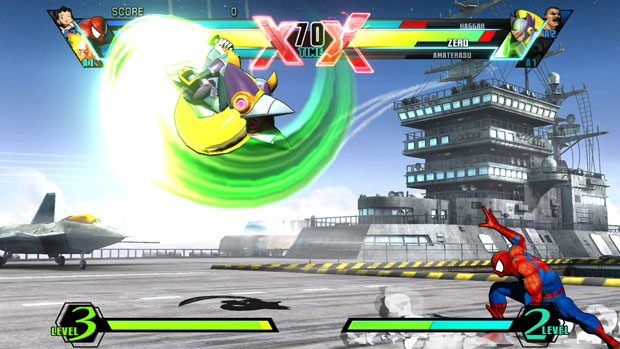 "A proper tutorial… to get players on the path to high level play can be found within content bare games like Pokken Tournament, so even if it’s a port, it’s sorely missed."

A proper tutorial that introduces basic to advanced concepts and a character specific mission mode to show off moves to get players on the path to high level play can be found within content bare games like Pokken Tournament, so even if it’s a port, it’s sorely missed. Considering the net code with this version is stronger than ever (at least with the matches I found, seems the community might be a problem,) it’s a shame the game doesn’t help more players prepare for that arena.

Of course, arcade mode still offers a single player diversion to unlock little ending cutscene segments to see your favourite characters interact in fun ways, and the Heroes and Heralds mode is a great addition to lose hours in. A little bit like the Abyss modes in Arc System Works fighters meeting the Conquest feature of Smash 4, players can divide into teams of Heroes fighting for the peace of earth, or Heralds battling for Galactus’s subjection of it. The result of this comes to a territory control back and forth where players pick where to battle, with winning and losing affecting the level of control of an area their side has.

As Heroes and Heralds continues, players earn different cards with special effects to enhance their chances against the increasingly brutal fights. Cards feature even more fan favourite content and allow players to build a deck for all kinds of effects, from simple things like a defence boost to fancy tactics like teleporting around. Like similar modes other games have since run with, it’s a fun distraction from the core of the game at best, but great to mess around with. 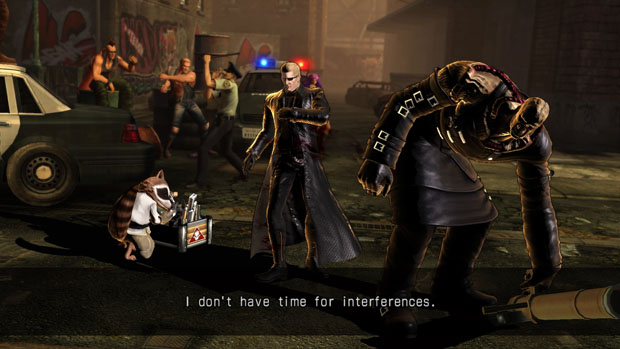 "As Heroes and Heralds continues, players earn different cards with special effects to enhance their chances against the increasingly brutal fights."

Ultimate Marvel VS Capcom 3 comes to the PS4 bringing with it a new coat of paint, but not much else of note. It is dated a little bit by the lack of training tools we’ve come to expect in fighting games since, but that doesn’t invalidate the fantastic, frantic fighter than players have been enjoying for years is now easily accessible again. Genre newcomers aren’t going to find a super welcoming game, but if you’ve got a handle on your hadouken and some buddies, it’s gonna take you for a great ride.

Visual updates help keep the chaos followable, and all the great content that was there in 2011 is here now at a rock solid frame rate. Solid netcode makes online play smooth.

The lack of training modes we now expect from fighting games dates the game and does no favours for getting new blood into the community before Marvel vs Capcom Infinite. No other new content to speak of means that if you’re happy on PS3 or 360, you’ve got no reason to jump.

Final Verdict:
FAIR
Ultimate Marvel VS Capcom 3 doesn’t really welcome newcomers into the amazing crossover battles that the game can offer, and doesn’t have any new content to really tempt a double dip from an old fan, but the visual update and just being made available again is fantastic. It’s great to welcome another fighting franchise to the current generation if you’re looking for something to play with friends, but perhaps the PS3 version can be busted out for the same experience until Infinite comes out.
A copy of this game was provided by Developer/Publisher/Distributor/PR Agency for review purposes. Click here to know more about our Reviews Policy.