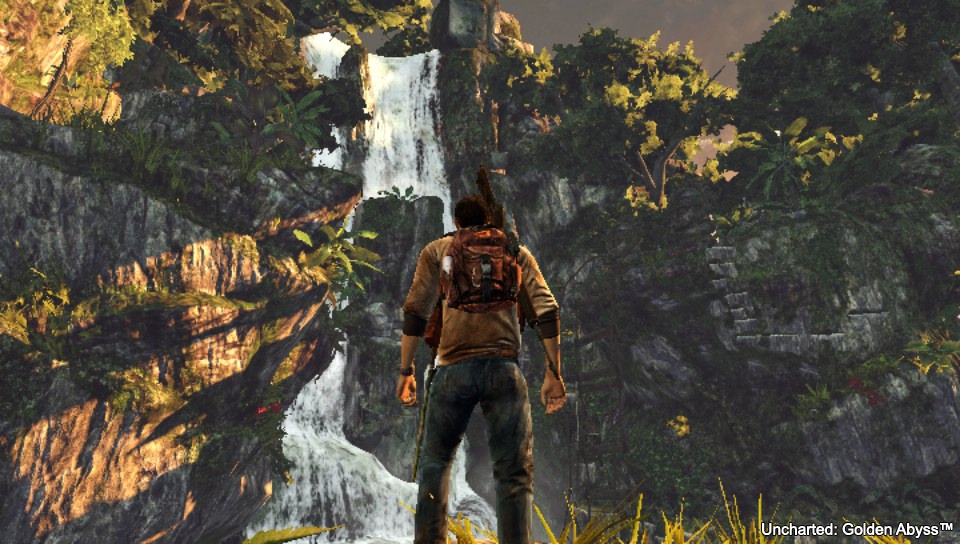 Uncharted: Golden Abyss is made by Sony Bend Studios — let me get that out of the way first. Naughty Dog, who created the phenomenal series on the PS3 did collaborate with Bend on this game, which is a launch title for the PlayStation Vita. The Uncharted franchise is known for its spectacular visuals and characterization, along with lovable protagonists. In Golden Abyss, Nathan Drake is back for another adventure, and the game also introduces some new characters.

So how does this franchise, which is primarily based on a home console, translate on a portable? I have to say, I’m pretty impressed with it. It truly offers the console experience on the go. Of course, the Vita makes this easier with its dual analogue setup and spanking OLED screen, but considering this is a launch title, the level of polish offered here is quite astounding.

The game utilizes all the unique control options that the Vita offers. One touch platforming and rear touch climbing are fully featured in the game. There’s also a hilariously named trophy that I got for using the rear touch pad of the Vita for climbing a rope — not a bad one for your first trophy on the Vita, eh? The game has a lot of collectibles, much more than the console versions of Uncharted, which really is a testament to Bend’s effort on this iteration. 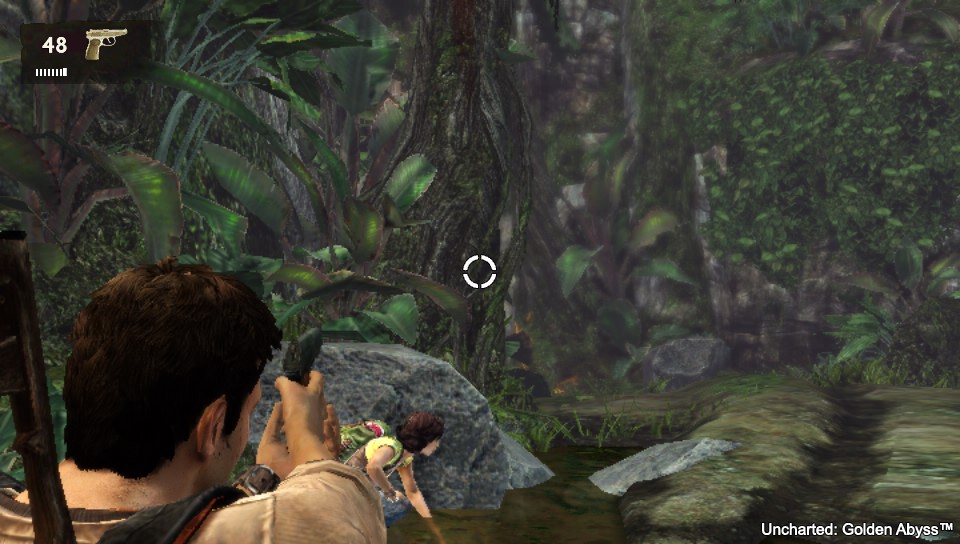 I had a little internal conflict while playing Golden Abyss. It’s hard not to scrutinize the game, when Naughty Dog took the franchise to incredible heights on the PS3, and while I know this is a bit harsh on Bend, they’ve completely stood up to the task and created a game that is completely worthy of the Uncharted name. There are a few minor niggles, however, with the aiming being a little unresponsive at times.

There is a gyro-aiming system, and I felt it complemented the standard aiming well. It does take some time to get used to them, and once you do, you will be popping heads like no tomorrow. Sometimes, it felt like the abundance of control options — which were no doubt included just to showcase the Vita’s tech; this is a launch title after all. While they work well, it felt completely unnecessary. The lack of R2 and L2 buttons wasn’t felt due to the responsive OLED touchscreen.

The game begins with Nathan Drake and a guy named Jason Dante exploring a tropical setting of Central America. There are new characters here — a Chole replacement named Marisa Chase, who I felt was a pretty good partner for Drake. There are also returning characters, which should make some people happy. The plot is not really that significant, nor does the game feature splendid writing, but you will definitely appreciate it once you reach the end of the game.

Drake will entertain you with his witty one-liners as usual, and he completely retains his charisma here. The voice acting for all the characters is pretty top notch, and Nolan North is back as Drake, so you know what to expect. If you’re wondering whether the game will live up to the usual standard you come to expect from this franchise — fret not! 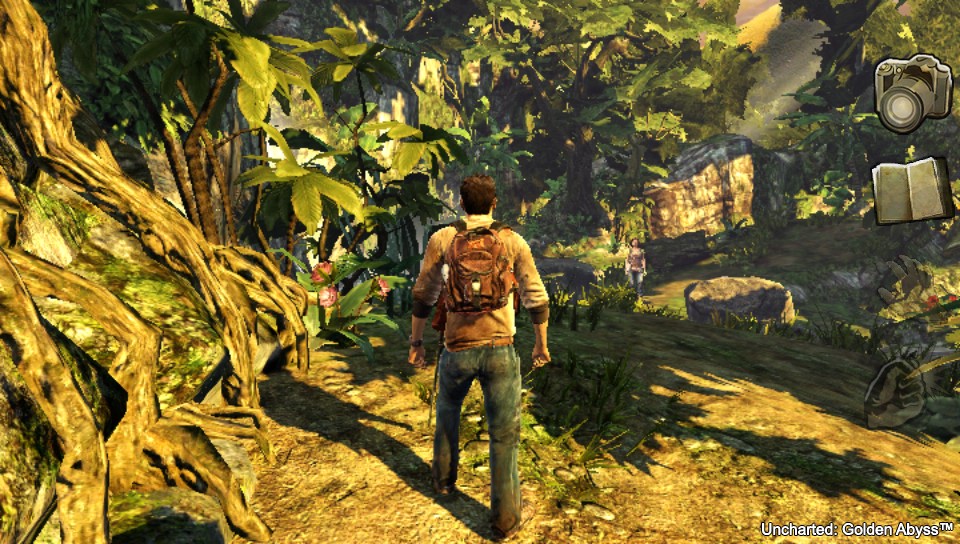 The visuals are spectacular, and by the time I reached chapter 10, I was bewildered at the fact that I’m seeing such sort of splendid vistas on a portable device. From lush forests to damp caves, Golden Abyss has everything, and you definitely won’t be disappointed with the variety on offer here. This is quite a lengthy game, so expect to spend around 7-9 hours on the hard difficulty, and those yummy trophies will make you keep coming back for more.

The platforming is pretty much automated in the game due to the touchscreen controls, so you really don’t have to do much here. There are some context sensitive actions that you have to perform — usually for story related things. Sometimes you have to rub the screen to reveal some clues, or take photographs of specific locations to earn trophies. Drake’s journal contains a lot of information as well. There are plenty of ways to spend time in this game, even more than the console versions.

Uncharted: Golden Abyss is a fantastic launch title that makes the Vita stand out. When it comes to spectacular visuals or the joys of two analogue controls, this game doesn’t disappoint, and is a content rich game completely worth your time. There is no multiplayer component here, though. That’s a little disappointing, considering this is Bend’s finest effort yet.

The aiming can take a while to get used to. Lack of a multiplayer component is disappointing. Simplified gameplay mechanics.

Final Verdict:
SUPERB
Uncharted: Golden Abyss is a fantastic launch title that makes the Vita stand out. When it comes to spectacular visuals or the joys of two analogue controls, this game doesn't disappoint, and is a content rich game completely worth your time.
A copy of this game was provided by Developer/Publisher/Distributor/PR Agency for review purposes. Click here to know more about our Reviews Policy.