Lighthouse Studios' upcoming survival horror FPS Death in the Water 2 is a game that seems to be punching well above its weight.

While the FPS genre has remained a mainstay of the medium for the longest of times, it’s only in recent times that the genre’s popularity has experienced a resurgence of sorts. Once a genre brimming with multiplayer-centric military shooters, the first-person-shooter genre now encompasses a wide range of experiences – from horror games to arena shooters to RPGs and many more. Leading the charge for bringing about this FPS revolution can be credited to the many indie and AA studios that have shot to fame in recent years – largely thanks to streamlined development tools and the rise in popularity of digital publishing platforms like Steam. The future is looking as bright as ever for fans of the FPS genre with games including but not limited to Death in the Water 2 looming right over the horizon.

Developed by UK-based indie Lighthouse Games’ Studio, Death in the Water 2 is a successor to Death in the Water that was released all the way back in 2019. The original game saw players defeating waves upon waves of Great White sharks using underwater grappling hooks. While a fun game with a Mostly Positive rating on Steam, Death in the Water is an incredibly simple game that seems firmly rooted in the traditions of being a proof-of-concept of sorts. 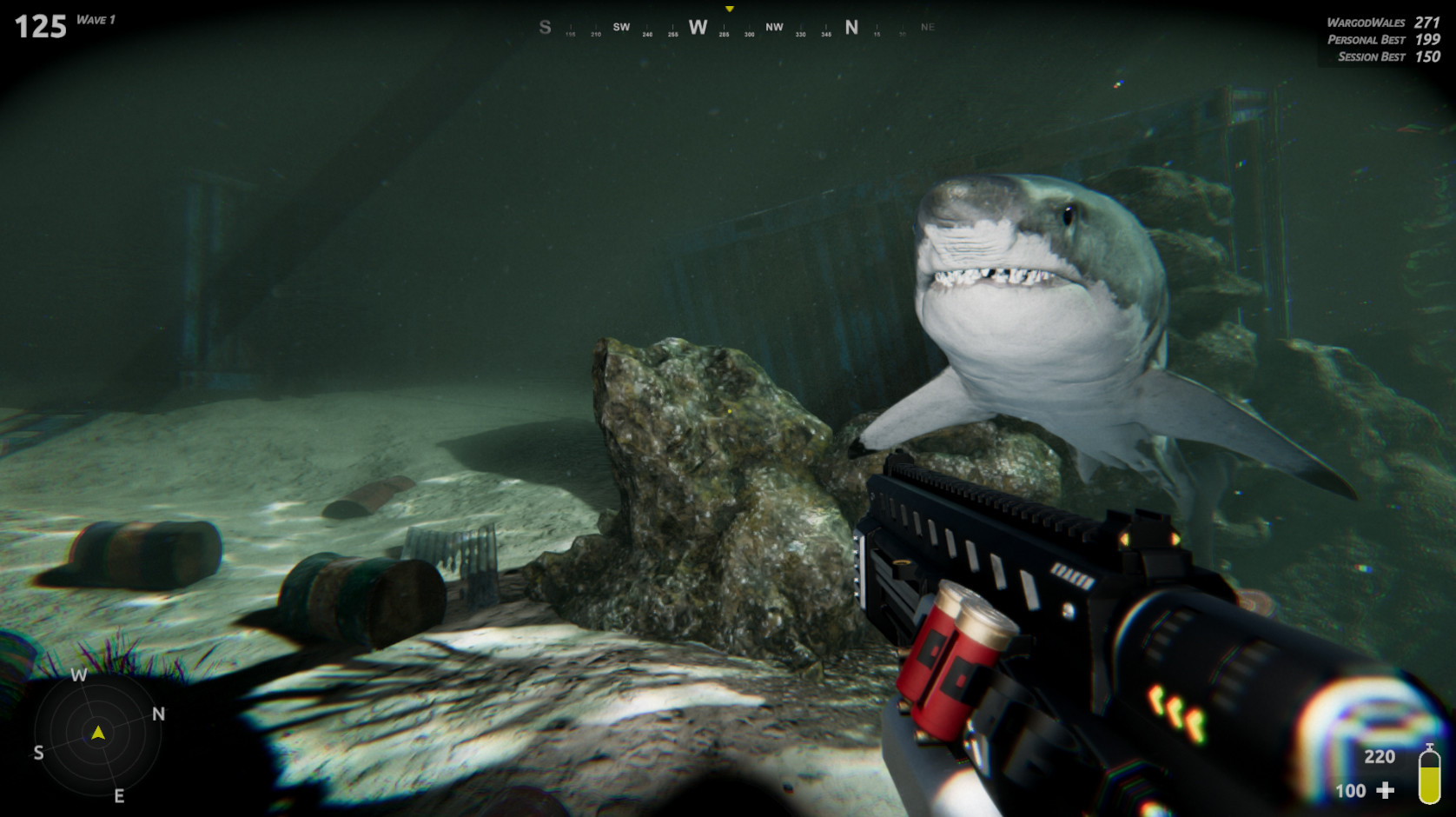 Its sequel, Death in the Water 2, takes all of these concepts and sets a stage so large that it completely dwarfs the scope of the original game. While it’s still set in underwater and it still sees players fighting off hordes of sharks and what have you – but the many additions that the sequel will be featuring are very meaningful ones that could very well make it one hell of a game.

For starters, the game features a ton of different types of underwater creatures, unlike the first game which featured only one type of shark. There’s the majestic Great White Shark, the spot-finned Black Reef shark, Leopard Eels, Coral Reef Sea Snakes, Dolphins, and even mermaids that look like zombies among many others. Hell, you can even fight a gargantuan three-headed Hydra that spews electric balls at you from afar. All of these creatures are all rendered in exquisite detail with an incredible likeness to their real-life counterparts – barring some fictional ones, of course. This attention to detail only serves to show the dedication of the developer towards this project and is easily one of the strongest aspects of this game.

Additionally, the many sea creatures will also be functionally distinct from one another, presumably having different behavior trees, weak spots, and the like – all of which should help players in crafting efficient strategies to dispatch them with relative ease. The movement of these creatures is governed by a procedural animation cycle, so players may encounter any of these creatures at any moment which should give Death in the Water 2 a horrifying vibe as any number and any type of deadly creatures could be looming in the dark depths of the ocean. 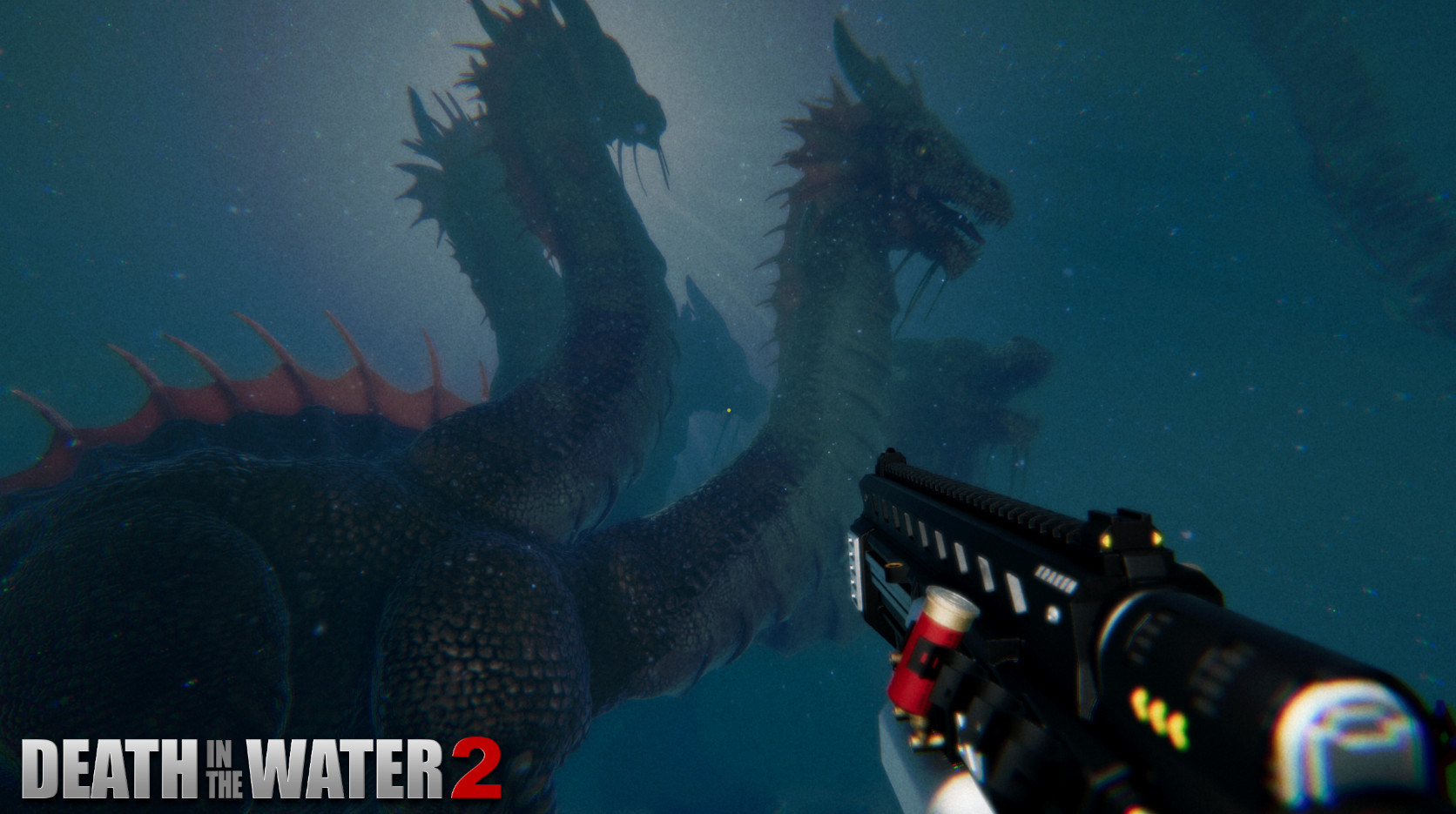 On the topic of horrors in the ocean, the big baddy in Death in the Water 2 is a mind-controlling Kraken. It supposedly monitors your every move, although the developer hasn’t specified what this exactly means. But if I had to take a guess, it seems to be just another fancy set-dressing for Left 4 Dead‘s Director AI – a system that uses a multitude of variables like available ammunition and player performance to aggregate a stress level and then throw enemies and events at the player accordingly. Of course, the Kraken could also be an actual creature in the game considering how many fictional and mythical sea monsters the game already has – so we are not exactly sure.

Defeating the many different types of sea creatures would be no easy feat, and Death in the Water 2 features a sizable assortment of weapons for the job. There’s a trusty knife that can be used for slicing down smaller creatures like fish, a small-barrel pistol for close-range combat, and a long-barreled rifle for taking down bigger game. These are just three of the weapons that can be seen in the multitude of gameplay snippets Lighthouse Studios has been putting out. Granted it’s not the most varied arsenal of weapons in any game, Death in the Water 2 is still being actively developed at the moment – so more weapons could definitely be added in the near future.

In addition to battling the many monsters of the sea, Death in the Water 2 is also putting some focus on exploration. Players are free to explore the game’s map that’s populated with interesting flora and fauna that all react accordingly to the surrounding water. You can also find many different types of sea snakes flailing around the tall grass, which spew venomous acid on you. While exploring the underwater seas, players will also come across sunken ships, industrial structures, and the like – which hide valuable treasure boxes that might contain important resources that could be used to level up or weapons that make light work of these terrifying sea monsters. 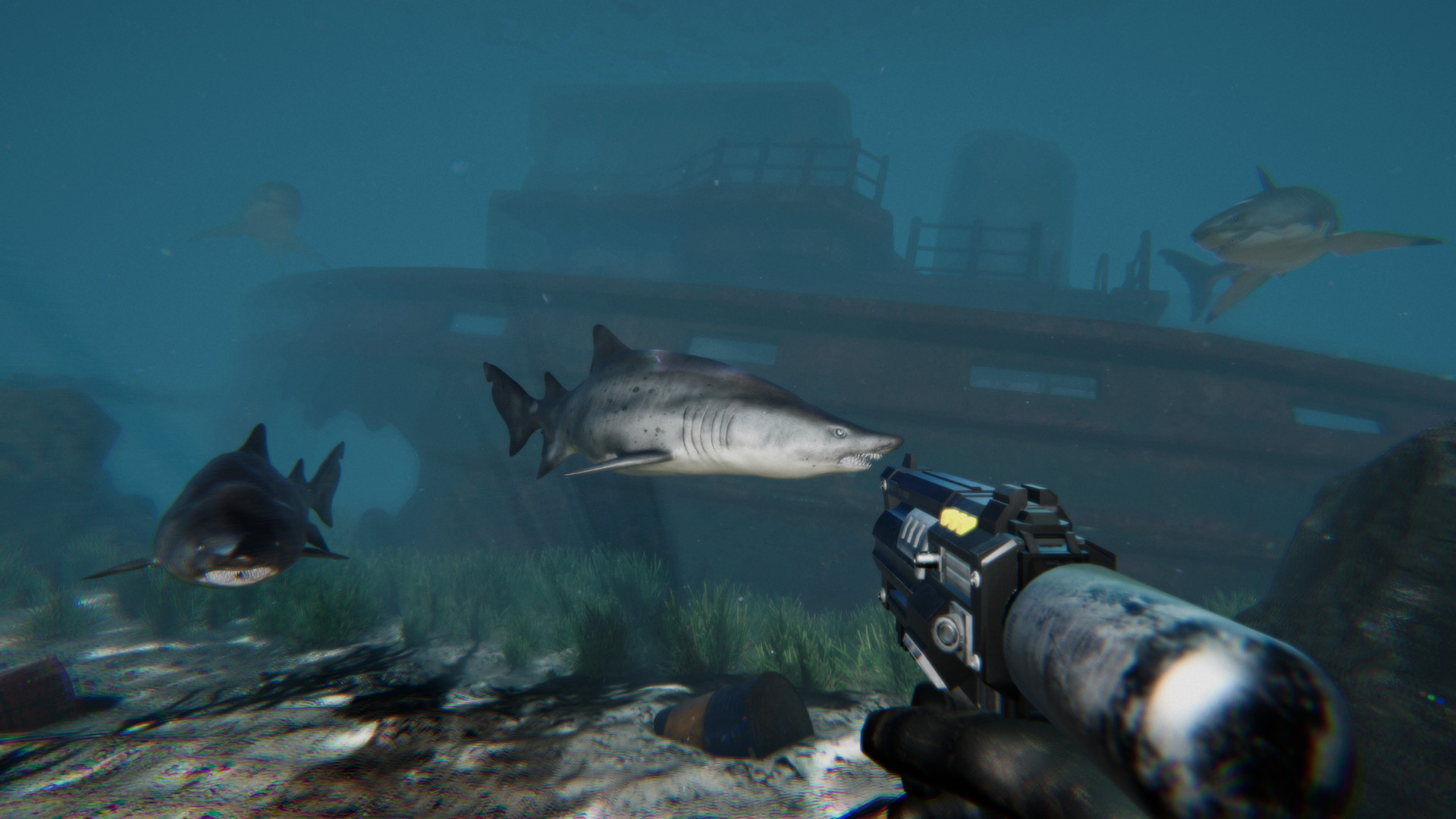 On the technical side of things, Death in the Water 2 is currently being developed using the Unity Engine. It’s a popular choice amongst indie developers, and Lighthouse Studios’ choice to go with this engine shows some positive results. While the game is certainly not the best looking by any means, it still looks decent on a purely technical level. The art direction, as mentioned before, is absolutely stunning with a realistic rendering of the water, surface materials, and foliage which can make the game a sight to behold when it starts firing on all cylinders.

The choice to go with Unity also has had a direct result on the development pace of the project. Lighthouse Studios is a two-man development studio, but the game development process is still chugging along at a consistent pace. The developer shares multiple development updates on a regular basis on their social media handles, which has us confident that Death in the Water 2 will end up being a solid project. It’s currently slated for a 2022 release, which we are hoping the game will meet. Death in the Water 2 is currently in development for PC, and there are seemingly no plans to bring the game out on console.

In conclusion, Death in the Water 2 is looking to be a promising sequel that’s building upon the strengths of the original. The underwater setting is looking to be a fantastic backdrop to fighting the many mythical sea creatures that roam in the murky depths of the water. While it’s still a bit restrained in its scope when compared to similar games like say, Subnautica – it’s still punching well above its weight and we are really hoping it turns out to be simply put, one hell of a game.