To the delight of many, the newest entry of the 20-year-old Japanese role-playing Valkyrie series has arrived. Unlike the previous entries though, Valkyrie Elysium sports a clear focus on real-time action and a trimmed down story that, while strikingly uninventive in most ways, still executes on the vast majority of its ideas quite well. Somewhat bland characters and a by-the-book attitude towards it’s gameplay only slightly impede it, as it gladly stands on the shoulders of countless action RPG’s that came before it. While long-time Valkyrie Profile fans may balk at the brash stylistic shift and clear insistence on catering to a wider audience, for what it’s worth, it does a great job of it. And as the old Icelandic proverb says, “A wise man changes his mind, a fool never will”. Immediately familiar concepts like heavy and light attack combos, multiple progression trees, and a steady stream of new abilities and enemy types to keep things fresh, make the game work well, despite perhaps ignoring a bit more of its legacy than it needed to in the process.

Caught between a weakened Odin, and an army of the undead threatening to bring about the end of the world, the Valkyrie accepts her mission of purifying the world and paving the way for Odin to regain control. That’s basically it story-wise for the first few of hours. As you hack away at the same handful of enemy types and even take down some massive Naglfars, some new characters are revealed that thicken the plot a bit, but little happens with the narrative to bring you anywhere near the edge of your seat until you’re much further in. This does give Valkyrie Elysium a slow start, which isn’t necessarily a bad thing, but it does take its sweet time compared to most of its contemporaries in the hack ‘n slash genre. In that, it sometimes feels like the remnants of its hardcore JRPG roots are still lingering around in there somewhere, but as the game rolls on, that notion fades away considerably. I’ll never fault a series for trying to genuinely reinvent itself, but I was a little disappointed to see Elysium reel itself in so much with the narrative considering its rich and complex history.

"While long-time Valkyrie Profile fans may balk at the brash stylistic shift and clear insistence on catering to a wider audience, for what it’s worth, Valkyrie Elysium does a great job of it."

Gameplay for Valkyrie Elysium is very strict about following the hack ‘n slash action RPG playbook, which, for many, will be totally fine. It certainly was for me. Mixing light and heavy attacks, upgrading abilities, and adapting to new enemy types are front and center. Similarly, to the story, the combat and move set take their time opening up, but even before they do, it’s pretty apparent that you have a really solid action game here. Attacks are impactful and fun to master, especially as you mix in dodges and parries to pull off different moves that make you quite nimble. Learning the different weapons is also fun, even though they aren’t as different as I’d like them to be, but executing a powerful combo and landing it on an enemy just right is accentuated with compelling, stylish animations that don’t overload your screen with nonsense, but still keep things cooking nicely.

The automatic soft-lock that keeps Valkyrie always attacking towards some enemy as long as it’s in range, and the soul chain that quickly closes large gaps can keep the action as aggressive as you want, while the hard lock that you activate with R3, her swift dodges and blocks facilitate more tactical and defensive approaches. All of which you’ll need to be familiar with. You’ll also need to get familiar with which art attacks work best on which enemies, and selecting the best weapon for each fight. Keeping two weapons and two elixirs equipped to the d-pad at all times keeps the player out of the menu screens in and in the action a bit more than other Japanese action RPGs, which I came to appreciate quite a bit. There is a good amount of flexibility here too, as most weapons or arts can be used in most situations, despite there clearly being favorable combinations that are very much worth leaning into.

Overall, I enjoy the combat quite a bit. The automatic soft lock might trip you up sometimes if you aren’t paying close attention to it, and I found myself babying the camera a little more than I would’ve liked, but the kinetic, weighty moment-to-moment action outweighed those gripes for me. Defeating enemies and smashing objects in the environment will yield different types of gems and other resources, and these are spent on upgrades to your abilities and weapons. These weapons can be upgraded further with runes which you’ll also come across here and there, and like most of the rest of the game, there’s really nothing in Valkyrie Elysium’s RPG mechanics that you haven’t seen before, which again, considering how finely tuned it all is, is perfectly acceptable. 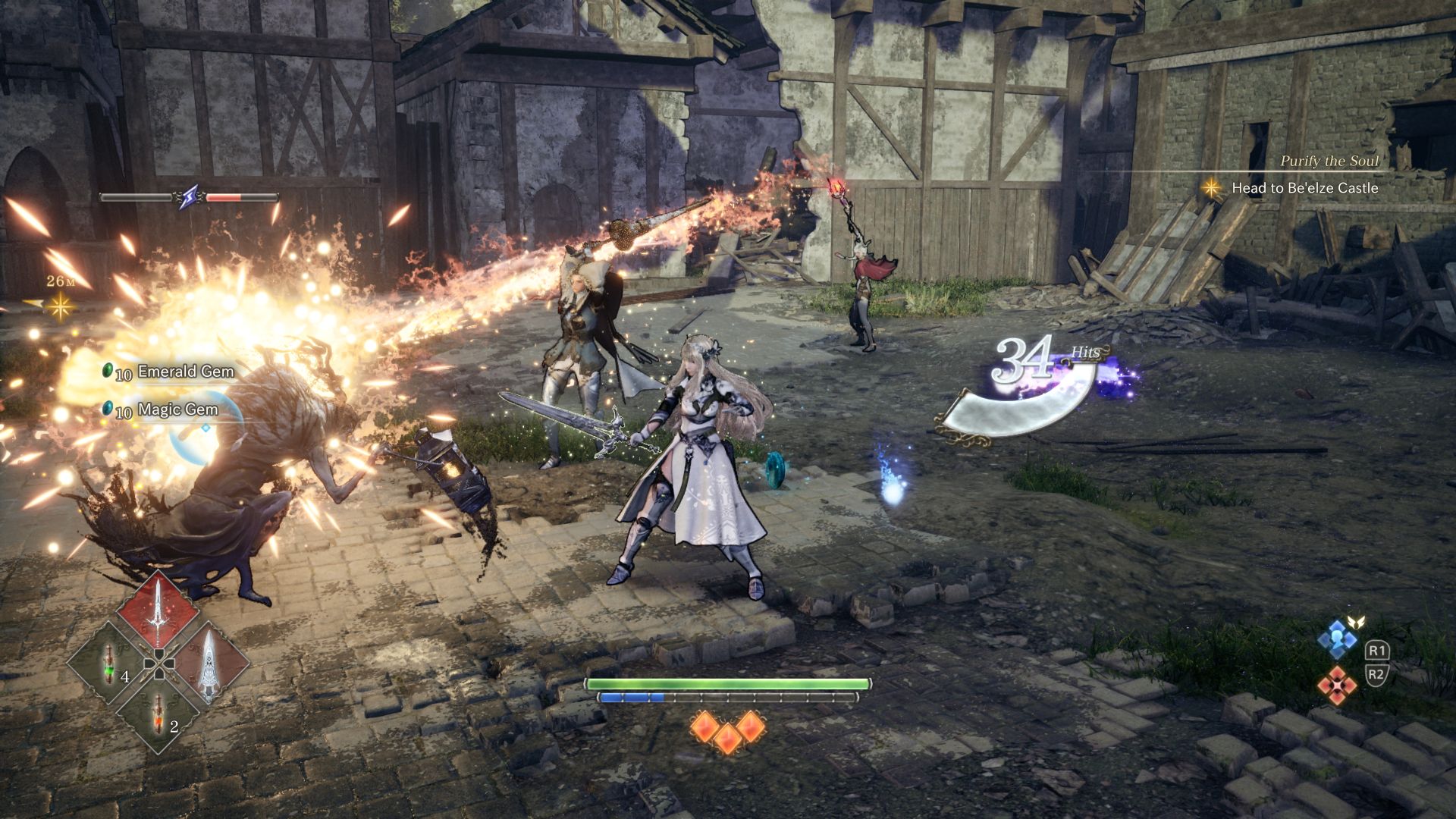 "I enjoy the combat quite a bit. The automatic soft lock might trip you up sometimes if you aren’t paying close attention to it, and I found myself babying the camera a little more than I would’ve liked, but the kinetic, weighty moment-to-moment action outweighed those gripes for me."

At the same time though, I often found myself waiting for the other shoe to drop. Hoping the game to throw some sort of monkey wrench into the mix to spice things up and surprise me, but sadly it never really did. Valkyrie Elysium does make a modest effort in this regard though, with the einherjars, which are spirits that Valkyrie meets and can summon later throughout the game to help in combat and aid you with accessing new areas. With the latter, einherjars don’t inject as much variety as they could have, as the handful of situations where they are required are immediately telegraphed to you as such, thus, not really eliciting much of the sense of discovery they could’ve. Despite that being their more prominent contextual purpose, unleashing them in battle fares much better, as mixing them with corresponding arts can produce powerful results.

Valkyrie Elysium’s levels are very linear, with little more than the occasional deviating path that leads to a dead end, a chest, and sometimes a short fight. The game does have sub quests, but they need to be selected from the hub world and pursued on their own instead of being integrated into the main chapters, which is a bit odd considering that the sub quests seem to share the same maps as main chapters anyway. Levels are also highly similar to each other thematically, with a lot of the same washed-out stone structures and pale fields hosting your gameplay. That’s not to say they look bad, in fact, the almost misty look to them does make sense with the ethereal tone of the game albeit at the cost of feeling a bit drab at times. The art direction is clearly defined though, and does show off some fairly high production values with lots of soft lighting and making the more colorful foreground action pop off the screen in comparison.

Also, snuggly fitting into the game’s larger tone nicely is the soundtrack, that superbly mixes the chord structures and themes that are to be expected in RPGs with many distinct drums, woodwinds and other instruments along with choir ensembles that feature a lot of range. From rumbling baritone voices to the far sweeter tenors and sopranos, I was a bit shocked to see such compositional breadth being applied to an action game’s soundtrack that didn’t necessarily need it, but of course is only enhanced by it. I highly suspect with all the talk about the genre shift for this game surely dominating discussions around it, the outstanding music in Valkyrie Elysium will almost certainly go down as its most underappreciated element. 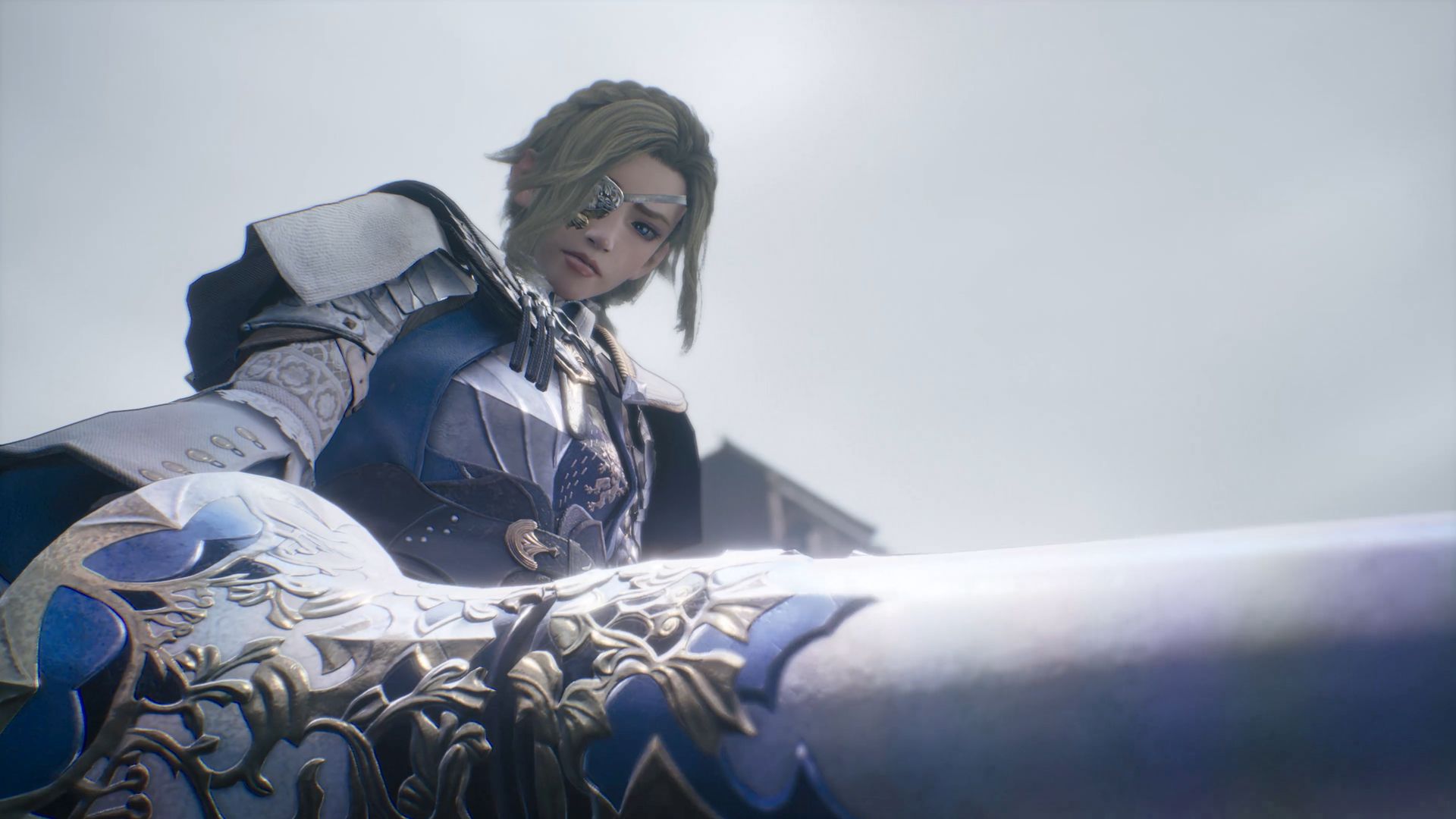 "Valkyrie Elysium is definitely not your classic Valkyrie game. It’s completely reinvented for better and for worse. I have my gripes, and you probably will too, but ultimately the game works out quite nicely for what it’s trying to be."

If you haven’t picked up on it yet, Valkyrie Elysium is definitely not your classic Valkyrie game. It’s completely reinvented for better and for worse. I have my gripes, and you probably will too, but ultimately the game works out quite nicely for what it’s trying to be. Tonally, old fans might notice some whispers of Valkyrie Profile’s spirit here and there, but for the most part it’s going to require a completely different mindset. For those that are willing to take that leap of faith, you’ll be rewarded more often than not. And for those who just love a good hack ‘n slash action RPG, Valkyrie Elysium delivers a lively, appealing, and engaging one that doesn’t require a deep understanding of the previous games to enjoy. Hopefully Square Enix will support this new direction for the IP further with a sequel that tells a deeper story and gives us more elaborate levels to explore, but until then, this is a damn fine example of the genre and easily one of 2022’s best action games.

Occasionally wonky camera; Automatic soft-lock can be disorienting; Story and levels are a bit too simplistic.

Final Verdict:
GREAT
This entry to the Valkyrie series makes a graceful shift into the action RPG genre while only stumbling in a few small ways.
A copy of this game was provided by Developer/Publisher/Distributor/PR Agency for review purposes. Click here to know more about our Reviews Policy.