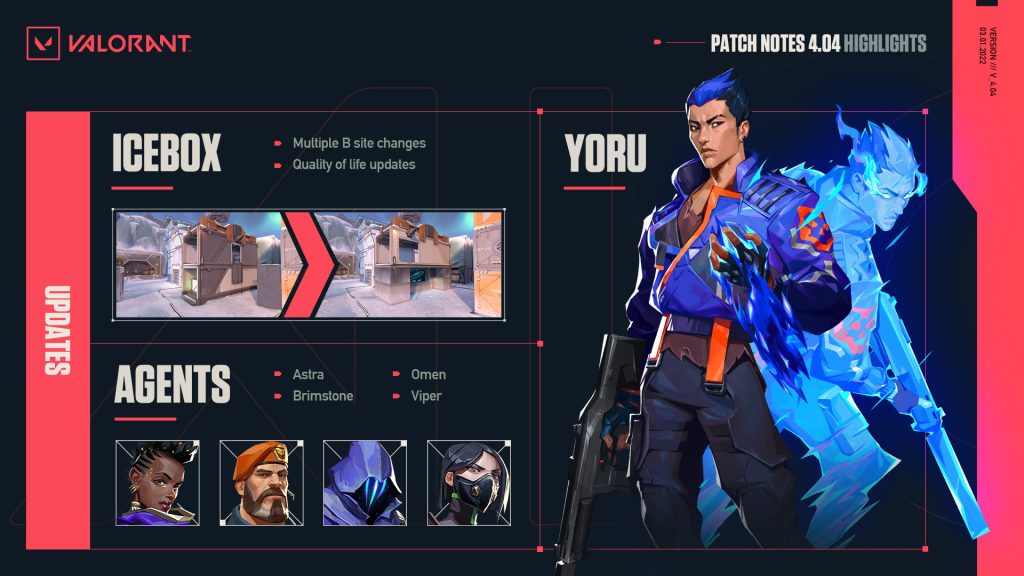 Valorant players can now download a new patch for the game, and try out the various changes it brings with it. Some of the notable changes patch 4.04 brings are to several agents, such as improving the system used to place abilities at target locations on the ground, by making it easier to find valid placement locations. Agent-specific changes like buffs to Omen, Brimstone, and nerfs to Astra, Viper have also been made.

The highlight agent of this patch is Yoru, who received a myriad of positive reworks, making him a dominant agent to pick and play in matches.

Map changes have also been taken into consideration and addressed to spice up the firefights between attackers and defenders. Ascent has received a small change where the B orb can now be taken from the lower box.

The main focus of map changes is on the Icebox map though, where the B site has been reworked to facilitate control during attacking, along with subtle changes to mid, B Greens, and A site being altered to help defenders isolate attacker angles.

Apart from the above changes, bug fixes, competitive update to increase the variety of maps players encounter, and a fix for an issue with AFKs in the Escalation game mode has also been made.

To read the changes in more detail, check out the full patch notes below.

Improved the system used to place abilities at targeted ground locations. This update should make it easier to find valid placement locations in tight spaces. These are the abilities affected:

Introducing initial testing of a new “deterministic map system” in LATAM. The goal of this system is to increase the variety of maps that players will encounter. If there are no issues, we plan to activate this system (explained below) for all regions within the next few days/week. Although this is LATAM region only, we are including it here as a heads up if we decide to expand. Stay tuned to the official VALORANT channels for updates.