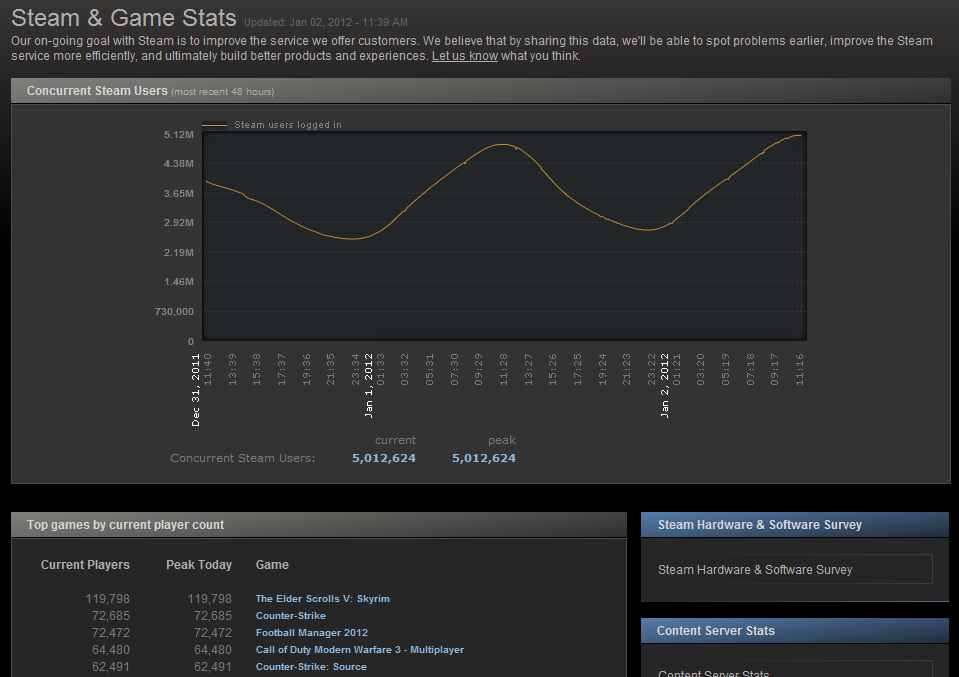 Valve has released the 2011 growth rate details with the press, and it is massive!

During 2011 the platform grew to offer over 1,800 games to over 40 million accounts. Year-over-year unit sales increased by more than 100% for the seventh straight year, and during the 2011 Holiday Sale Steam’s simultaneous user number eclipsed the 5 million player mark.

Meanwhile Steam doubled the amount of content delivered in 2011 vs. 2010, serving over 780 Petabytes of data to gamers around the world.

To meet the increasing demand for games and services on the platform, the Steam infrastructure more than doubled its service capacity and a new content delivery architecture was deployed to improve user download rates.

Over 14.5 mil copies of Steamworks games were registered during the year, a 67% increase over 2010. Steamworks titles shipped during 2011 include The Elder Scrolls V: Skyrim, Call of Duty: Modern Warfare 3, Deus Ex: Human Revolution, and more.

Since the suite of services was released three years ago, Steamworks has shipped in over 400 games.

“Steam and Steamworks continues to evolve to keep up with customer and developer demands for new services and content,” said Gabe Newell, co-founder and president of Valve.

“Support for in-game item trading prompted the exchange of over 19 million items.

“Support for Free to Play (F2P) games, launched in June, has spurred the launch of 18 F2P titles on Steam, with more coming in 2012. Looking forward, we are preparing for the launch of the Big Picture UI mode, which will allow gamers to experience Steam on large displays and in more rooms of the house,” he added.