Mike Bithell’s newest title is sleek, stylish and flawed but full of personality

It’s not easy operating outside of the box, especially when it comes to pre-established norms. Just ask Robert Locksley, an enterprising young thief who’s taken control of a Volume. As part of a futuristic albeit totalitarian England ruled by corporate messiah Guy Gisborne, Rob’s idea of helping people take back their country is an unorthodox one. Using the Volume, controlled by a quirky AI named Alan, Rob is able to simulate the households and facilities of key Gisborne supporters and loot them, while streaming the successful heists to one and all. This effectively doles out guides for society to actually raid these areas in real life and relieve the wealthy of their ill-gotten gains.

Broadcasting these traipses from the Volume is a dangerous endeavor though as Gisborne’s forces are quickly descending on Rob through the course of the game. Even if Rob himself isn’t in danger during these simulations, he’s by no means safe. There are also the moral ramifications of his crusade. In order to ensure the collapse of the current society, is Rob justified in empowering people to become criminals? What about risking their own safety in the process? Is he really stealing from the rich and giving to the poor or pushing his own ideals on the world, much like Gisborne has? 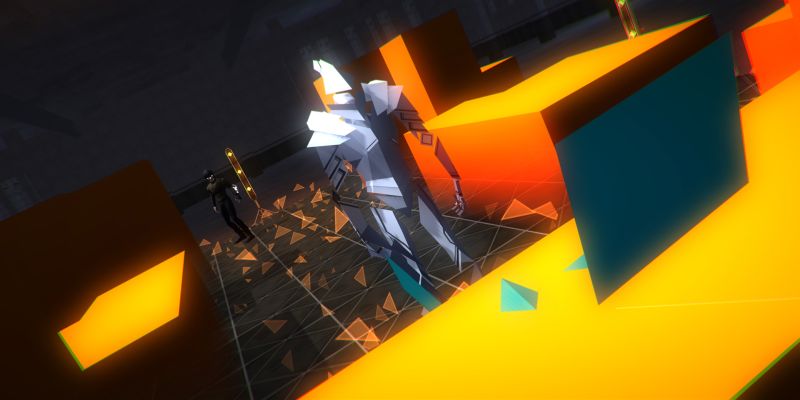 "It’s to creator Mike Bithell’s credit that he’s created both a compelling world and history from scratch along with an utterly ingenuous level of progression in the game’s 100 campaign levels."

In the midst of these compelling ideas – Let’s Play walk-throughs and Metal Gear Solid-like overhead stealth and sneaking combined with clean, Biodigital Jazz visuals that range from cool blue to burning orange – Volume is still a very easy game to get into. When conducting simulations, Rob will have to sneak past guards, collect jewels to open up the exit and then safely leave. Since guards can’t be killed, Rob must instead rely on various means to distract and sneak past them. In the beginning, this is possible through the use of sounds like whistling or leaving a tap on to attract their attention.

Later, you’ll find more sophisticated tools like a ricocheting projectile which can be detonated to trigger sounds in otherwise inaccessible areas; a gleaming oddity which catches a guard’s attention for a certain period of time; and even a noise-cancelling, speed boost which helps you bypass pressure-sensitive plates later. The guards won’t make it easy, of course – as you graduate from stationary and patrolling guards to guard dogs and turrents, you’ll have to make well-timed and split-second decisions in order to succeed.

It’s to creator Mike Bithell’s credit that he’s created both a compelling world and history from scratch along with an utterly ingenuous level of progression in the game’s 100 campaign levels. Considering the fact that each level is essentially made of blocks and tiles, each stage feels unique and special in its own right. The difficulty is slowly ramped up as new mechanics and combinations of such are thrown together. Whether it’s a new tool, a new enemy type or even an intriguing new plot development, Volume sustains your attention without overloading you with information. 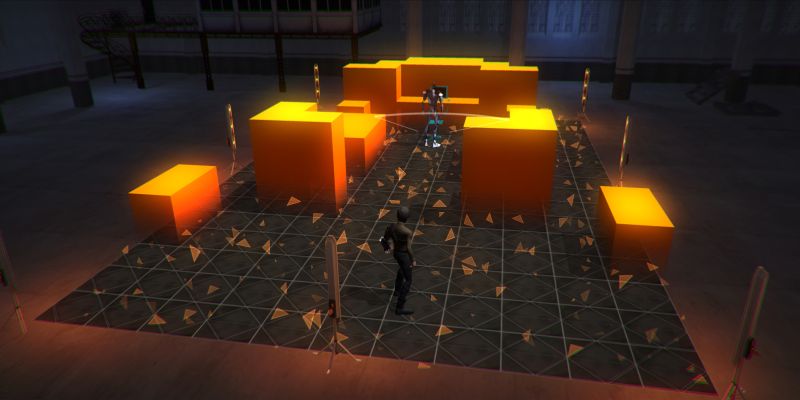 "Enemies have a fixed field of vision and won’t investigate anything outside of it. It also doesn’t help that guards upon being alerted will give up looking for you if you’re outside of their vision for a few seconds."

The story itself is presented through in-mission conversations and you’ll discover various notes throughout the simulation regarding the history of Gisborne Industries, its employees and the various Volume AIs that were created. One can appreciate this mix of story and lore – especially in the witty interactions between Alan and Rob or Gisborne’s menacing speeches (as portrayed flawlessly by Andy Serkis). Whether you want to learn more about the game’s back-story and setting throughout missions or simply run through the simulations, you’re always intrigued about what happens next. While there is certain romanticism to Rob’s actions, it’s certainly not all black and white and the plot serves to convey this well.

Volume isn’t flawless though. While in-mission conversations covering up vital parts of the screen as you play are annoying – and the only alternative is to wait for them to finish, wasting seconds on your completion time – there are other issues that serve to unbalance the game. For instance, enemies have a fixed field of vision and won’t investigate anything outside of it.

Even if you move beside them, they won’t react at all if you’re outside their FOV. Which is fine in a simulation but aren’t real people imitating these actions in the real world? Story nags aside, from a gameplay perspective, it does serve to break the sense of tension one could feel. It also doesn’t help that guards upon being alerted will give up looking for you if you’re outside of their FOV for a few seconds.

"Whether you’re looking for an intriguing story to sink your teeth into, a challenging stealth puzzler or just in the mood for something low-fi, complete with an awesome soundtrack, Volume is well worth looking into."

Then there is the generous littering of checkpoints and while we have nothing against them in theory, in Volume they can be used to simply rush through some sections or escape narrowly. This is because every time you hit a checkpoint and are caught, it immediately spawns you there. So if you happen to run past a difficult instance and hit the checkpoint by the skin of your teeth, you’ll respawn there with guards reset to their original locations. Again, this only negates the overall challenge of some instances and cheapens certain runs.

Overall though, Volume is an excellent mix of stealth, puzzle solving, story-telling and atmospheric visuals. Even if you breeze through the campaign, which takes several hours, there are already a number of user-created levels available to try out. A special section with recommended levels is also available and with the level creator, it’s possible to craft your own insane simulation for the world to conquer.

Volume may not have the advantage of a big budget and bleeding edge realism in its visuals. And heck, for a stealth game, it’s no Metal Gear Solid 5: The Phantom Pain when it comes to size, scale and whatever else one cares to measure it by. But it has tons of heart, class and a compelling gameplay model that can be both challenging and fun, despite its unevenness at times. Volume isn’t perfect but when it’s good, it’s really good. Whether you’re looking for an intriguing story to sink your teeth into, a challenging stealth puzzler or just in the mood for something low-fi, complete with an awesome soundtrack, Volume is well worth looking into.

Great visual style and soundtrack that are both relaxing and tense. Solid stealth mechanics with several fresh tools and scenarios. Action never gets stale as fresh challenges are thrown at the player. Compelling story and stellar voice acting all-around. Level creator is solid and leads to lots of replay value.

Guard AI is iffy - enemies stop pursuing within seconds of hiding and flat-out ignore you outside of their FOV. Checkpoint sprinkling can lead to "cheesing" certain portions. Both of the above points affect the overall challenge and intensity at times.

Volume mixes familiar stealth controls and perspectives with a bevy of intriguing, new mechanics. While its enemies won't really hound and hunt you - and the checkpoints provide more than enough support - Volume is a nice, low-fi experience for both casual players and hardcore stealth fans.

A copy of this game was provided by developer/publisher for review purposes. Click here to know more about our Reviews Policy.
Tagged With: Mike Bithell, pc, PS Vita, ps4, Volume