Wanted: Dead is Looking Like a Fun Action Cyberpunk Game

Soleil and 110 Industries' upcoming action game has turned quite a few heads.

First revealed at 2021’s Tokyo Games Show, Wanted: Dead follows cyborg cop Lt. Hannah Stone as she scissor kicks her way through hordes of braindead goons against the backdrop of an anime-inspired sci-fi Hong Kong. She’s heavily armed too; her savage medley of swords and guns are put to good use in eye-popping combo attacks, culminating in bloody brutal executions rife with dismemberment and point-blank head shots that’ll surely provide extreme satisfaction to pull off.

This third-person single player action adventure is clearly laced with oodles of humour too, which is just as well seeing as the viciousness of Lt. Stone’s blood splattering attacks could turn a few stomachs if presented earnestly. As it happens, gore of this type is so overwhelmingly gratuitous that its closer to cartoon – reduced to caricature, almost – thus when taken in combination with humour the gameplay becomes an exercise in absurdity. It’s leg-slicing executions and ping ponging decapitations are surely designed as satisfactory rewards for overcoming tough enemies. The result then, above all else, is that playing Wanted: Dead just seems like it’ll be incredible fun. A blast, even. Furthermore, a game which doesn’t take itself too seriously like Wanted: Dead could be just the tonic to counteract the burnout felt after completing a seemingly never-ending open-world odyssey or the grief that lingers after playing the latest emotionally impactful indie experience.

In an interview with GamingBolt, Wanted: Dead publisher 110 Industries’ Creative Director Sergei Kolobashkin stated the development team are concocting a large quantity of finishing moves with which to equip players. Clearly, they’re motivated by style and visual pazazz; they’re designing combat that’ll look as great on screen as it is satisfying to execute.

Together with developer Soleil, Wanted: Dead’s newly minted publishers come packed with legendary pedigree too; they’re a team comprising devs who’ve previously worked on Ninja Gaiden and Dead or Alive, with the former’s brand of challenging hack n’ slash combat a clear touchstone in Lt. Stone’s violent encounters. Fighting game Dead or Alive’s emphasis on slick combos is present and correct too, as Hannah’s athletic ability to chop down foes with nothing but her limbs appears unrestricted by recovery time. Seamlessly scything between enemies is the main draw here then; unimpeded combat clearly the magic ingredient to ensure a memorable and enjoyable experience.

That isn’t to say players can brute force their way through encounters, settling on their favourite weapon for the entirety of the game’s runtime. No, gameplay will require mastery of the game’s various combat systems. Harnessing a blend of hand-to-hand melee, sidearms, guns, and swordplay is crucial to success. As a result, the experience 110 Industries are pushing is touted as much more interesting than straight up button mashing, with deeper, more technical gameplay requiring players spend time learning and executing their skills for a much more unforgettable experience.

The game has heavy focus on story too, with a narrative said to follow Lt. Stone and her elite Hong Kong police ‘zombie squad,’ a specialist unit working outside the traditional boundaries of the police force, during a week they’re tasked with uncovering a major corporate conspiracy. Hannah will split her time between chilling with her pet cat and ploughing through a host of military contractors, mercenaries, and street gangs on her way to unspooling the game’s narrative threads. The gameplay trailers we’ve seen so far also hint at a mystery surrounding the origin of our heroine protagonist too, as if there’s an untold truth at the heart of her existence. Perhaps she’s unaware she’s a synthetic cyborg? That’d be a narrative arc lifted straight out of Blade Runner, of course, but with high-ranking NPC’s wondering whether Lt. Stone knows the truth and speculating on what might happen should she find out the nature of things, then it doesn’t seem too much of a stretch to assume there are question marks surrounding her origin. 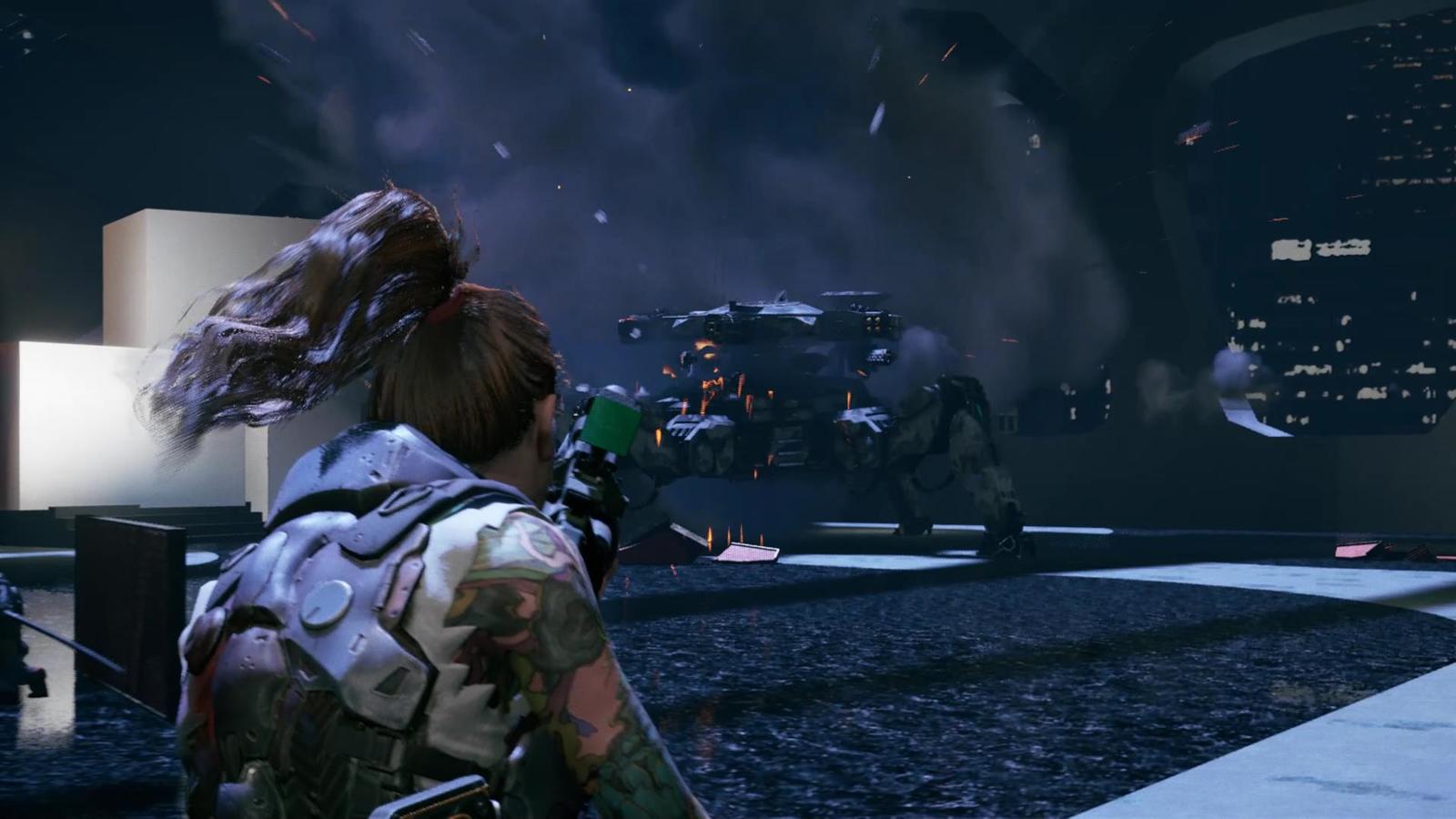 Elsewhere, the game’s anime-inspired narrative featuring elite police units, synthetic lifeforms, and cyborgs immediately recalls the iconic manga series Ghost in the Shell, in which its main character, Major Motoko Kusanagi, is a powerful cyborg whose cyber brain is constantly under threat from highly skilled hackers. There’s certainly potential for cybercrime to be a narrative thrust in Wanted: Dead’s story – it is an enduring trope of cyberpunk fiction of course – but Ghost in the Shell’s setting of fictional Japanese city Niihama bears more than a passing resemblance to Wanted: Dead’s vision of a near-future dystopian Hong Kong too. For the record, 110 Industries’ Creative Director Sergei Kolobashkin cities Wanted: Dead’s version of Hong Kong as populated by a host of eccentric characters, bosses, and squad mates. So, potentially, it’ll be the game’s NPC’s that’ll add believability to its near future high-tech society bearing the dystopian brunt of collapse.

Ghost in the Shell hasn’t been explicitly stated as influence though. The cyberpunk anime touchstones mentioned by Kolobashkin in that aforementioned GamingBolt interview include Cyber City Oedo 808 and Dominion Tank Police. The influence of the latter especially isn’t limited to the flashes of mech combat and battle droids seen in Wanted: Dead’s most recent gameplay trailer – which, by the way we don’t have an affirmative explanation for just yet but tackling the sheer scale of mechanised opponent looks like an exciting boss encounter – but also in its tackling of serious subject matter surrounding ecological disaster and societal collapse, albeit delivered as shiny popcorn guilty-pleasure. Wanted: Dead is absolutely looking to replicate the same low brow feeling of explosive action movie. And, that’s a good thing by the way.

There’re certainly shades of  Sunset Overdrive, and much maligned cult 2009 third-person shooter WET in Wanted: Dead’s gameplay revealed so far too. For all the talk of interesting narrative and vibrant backdrop in this feature, it’s the super-fun gameplay which will make or break this game. Those similar titles just mentioned all exhibit relentlessly free flowing, highly stylised combat, with perhaps their narrative elements taking a backseat in favour of action. In that regard, Wanted: Dead’s similarly styled combat doesn’t appear to reinvent the wheel, and it’d be unfair to pass comment on its narrative merits with the game unreleased, but to be honest the game doesn’t need profundity if it feels great to play. With Lt. Stone’s breakneck pace, her rapid one-two, dash-punch, kick grapple throw finisher, Soleil and 110 Industries look to be tapping into something special, a game that’ll be endlessly entertaining, un-muddled by lengthy skill trees, un-bloated by a humungous open-worlds, just pure end-to-end carnage. 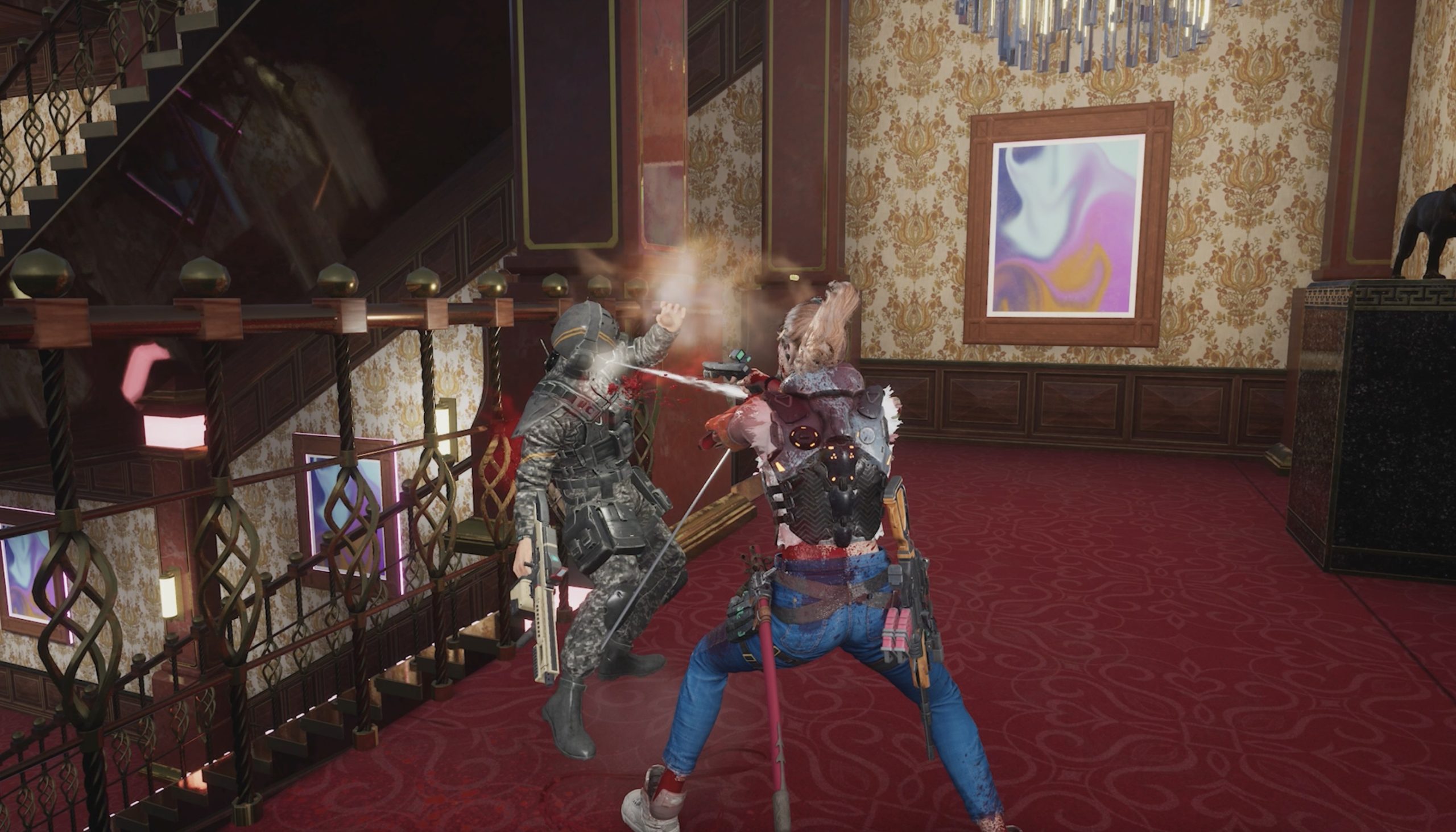 The degree of eccentricity on display in the trailers is intriguing too. In between gameplay and in-game cutscenes there’re flashes of anime and live-action sequences, and clips from contemporary cooking show tie-in Vivienne’s Late Night Chow – starring Metal Gear Solid V’s Stephanie Joosten, no less. Instead of these elements feeling disjointed or disparate, they seem more like parts of a whole; like they’ll effortlessly coalesce during playthrough. How they’ll tie into the game’s story arc remains to be seen, but they’re certainly arousing interest.

Wanted: Dead is coming in Q4 2022 to PlayStation 5, Xbox Series X/S, and PC which you can wishlist via Steam now.