Warhammer 40,000: Eternal Crusade Review – Something Finally Sticks To The Wall

For now, it’s good. It might shine one day.

It’s an interesting thing to watch when a license opens itself up, especially one as storied and if we’re being honest, intimidating and Tolkienesque from a mythos standpoint as Warhammer. Once Games Workshop focused on single major partners for larger titles, now they’re using a scattershot approach, allowing all who want to the ability to make something with this classic property.

Luckily, one of those shots caught Bandai Namco and Behaviour Interactive. While the deeply entrenched lore is in full effect for the fan, it’s easy enough to get into regardless. Four factions from the universe are represented, the Space Marines, Chaos Space Marines, Orks and Eldar, with subclasses within those. Perhaps they become more distinct once you’re deep into the upgrade tree I’ll touch on later, but my playtime with each left them all feeling and controlling quite similar.

Eternal Crusade has bigger systems at play here, such as territory control on a divided map, though that doesn’t feel quite fleshed out. You can zoom around and have a peek at who controls a sector and who might be close to capturing it, but as of now you can’t choose to engage within a specific location. Rather you can join a few different game modes, the majority of which come down to territory control and the box standard horde mode. 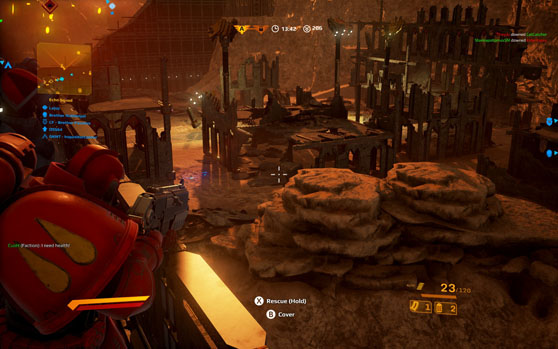 Eternal Crusade is trying to play the same game that Star Wars Battlefront played. While it’s going to take some time to get all those promised features in such as the map I mentioned above to truly make it feel grand in scale, getting your boots on the ground and becoming part of the sprawling 30 on 30 battles.

While the control immediately recalled Gears of War for me, it quickly became apparent that Eternal Crusade was going for a very different kind of game flow. Gunplay feels good and your sidearm, should your class have one, has the interesting trade off of automatic aiming for the loss of power. Melee and gunplay tie right into each other and you’ll usually find encounters start with trading shots only to quickly come to close combat. Going toe to toe with one of the iconic chainsaw swords like this calls upon a rock paper scissors system of light attack, heavy attack and parry that is both satisfying to execute and easy to understand.

The maps for these skirmishes are utterly massive, yet designed in a very layered, interesting way that can offer unique approaches. Perhaps you’re one of the classes with a jetpack that will let you take the high ground the map affords and zip away before you’re spotted. Or you’ll bring your tank around back to distract while the rest of the squad moves on a capture point. Should you need to get to a place on the other end of the map right away it’s simple to select a new spawn point. Class diversity and map polish is probably the strongest element to the game. Neither of them quite as mirror shined as Overwatch, but the grand scale excuses that to a degree. 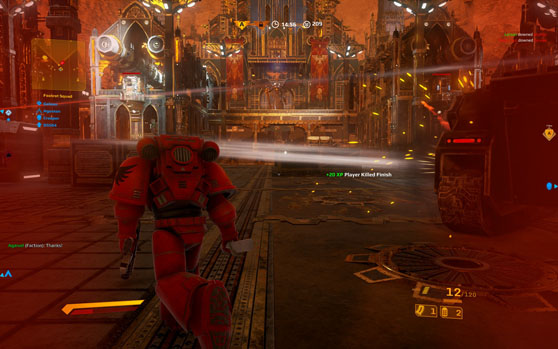 "The maps for these skirmishes are utterly massive, yet designed in a very layered, interesting way that can offer unique approaches."

While the exact specifics do vary a bit, the PvP game modes all have a central theme of point control. Perhaps you’ll be able to turn capture points back and forth as you fight for a point total, or perhaps you’ll fight for every inch as another team tries to keep you from taking a fortress. It’s enough variety in the moment to moment gameplay, and serves the universe purpose of giving some meaning to these battles that feels less gamey than a straight death-match.

While it would hang once or twice during loading, the huge battles ran consistently on my PC once I got in, keeping the frame rate steady, and showing off some great textures and weather effects with my GTX 1060. I was easily running on Ultra setting but fiddling with the graphics options should easily scale it back to lesser machines. The game also allows for Xinput controller support, though using it could put you at a disadvantage.

Eternal Crusade is easy enough to get into without any base understanding of the 40K universe, but it also doesn’t make it an easy entry point. Not a lot of room for narrative in a war zone. No room for tutorials either. Luckily players are able to practice to their hearts content within a special Garrison map without anybody shooting at them. Having this safe space to come to grips with the abilities of different classes and the controls doesn’t make the almost complete lack of tutorial OK necessarily. Just a little easier to swallow. 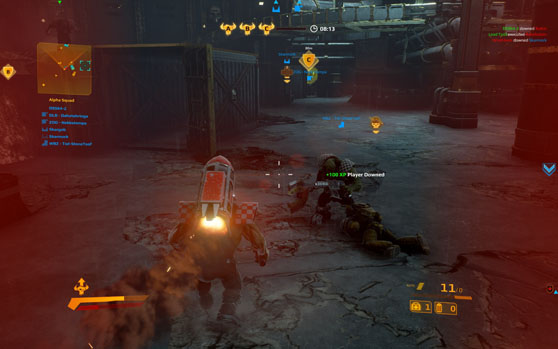 "Eternal Crusade is easy enough to get into without any base understanding of the 40K universe, but it also doesn’t make it an easy entry point."

The upgrade system is nothing new in competitive shooters, and Warhammer has quite the expansive one as it has roots in tabletop RPGs. But while Call of Duty would offer new guns and perks as you level up, they were more side-grades than actual upgrades. There would always be a trade off in the name of balancing and not wrecking new players. Warhammer directly goes for classic RPG inspired upgrades like decreasing stamina cool down. It’s too early to say if these upgrades will cripple the balance of the Eternal Crusade battlefields, but it’s one of my biggest concerns.

As with many games in this style, Warhammer 40,000: Eternal Crusade is going to constantly evolve from both actual developer changes and into what the community makes of it. Should the upgrades prove less game-breaking than I think they are, and a strong player base builds around this game, then we’ve got a very competent massively multiplayer third person shooter on the market. Little bit of a learning curve to cross and it might not be the best entry point into the world of Warhammer, but that isn’t really a deal breaker either. For now, it’s good. It might shine one day.

Very solid gunplay and well designed maps. Decently varied classes, even if they’re similar across races. Some interesting concepts at a very early stage here, like the territory map.

Some loading hiccups. No tutorializing will leave you figuring things out on the safe map. Upgrade tree has really worrying potential to unbalance the whole thing.

Final Verdict:
GOOD
If Games Workshop is throwing Warhammer at every wall to see what sticks, Eternal Crusade is certainly one of the splatters that has the most promise. Games of this nature inevitably evolve over time, but at worst, we’ve got a really good shooter here. Just don’t expect it to walk you into the world properly. It wants you to shoot stuff.
A copy of this game was provided by Developer/Publisher/Distributor/PR Agency for review purposes. Click here to know more about our Reviews Policy.