Few action RPG franchises have managed to enthrall fans across the world like Diablo. Even when Diablo 3 went through its launch woes, Reaper of Souls elevated it to the top of the mountain in terms of fun. However, while Blizzard was still busy getting its act together, a relatively unknown studio called Neocore Games brought us The Incredible Adventures of Van Helsing. This fantasy romp with dark humour was a success in its own right and spawned numerous sequels down the line. Neocore is now heading in a different direction with Warhammer 40K Inquisitor – Martyr, an action RPG with cover-based shooting and set in the Warhammer 40K universe.

How do you transition from a fantasy style hack and slash game to a more shooter-focused, sci-fi romp? GamingBolt spoke to lead narrative designer Viktor Juhász and producer Zoltán Pozsonyi for more information. 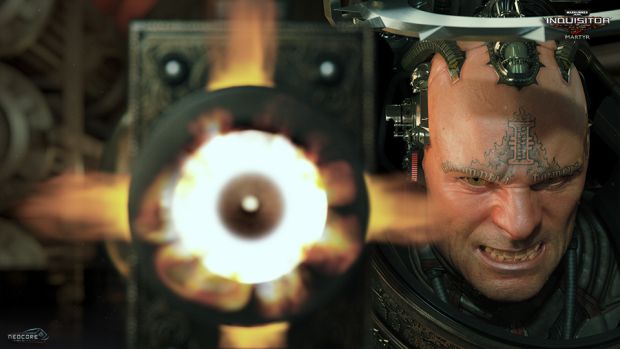 "Hack and slash gameplay is a very integral part of most ARPGs, so obviously we wanted to keep that particular element of the game."

What motivated you to develop a game in the Warhammer 40K universe? Was it the lore, setting or just the idea of space marines that was appealing over the supernatural Van Helsing universe?

We have been huge fans of the WH40K universe for a very long time – we have colleagues here at NeocoreGames who are regular players of either the tabletop original or the pen-and-paper RPGs, we all played the videogames or read the novels. And since we are also huge fans of the ARPG genre, we couldn’t help noticing that there are no ARPGs set in the WH40K universe, although it would be a logical fit. So we decided to create the first WH40K ARPG, with the Inquisitors in focus, because they seemed like the ideal protagonists for the genre.

Warhammer 40K Inquisitor Martyr feels like a big leap over Van Helsing with its emphasize on shooting and cover mechanics. How significantly different is it over the traditional action RPGs we see these days?

Warhammer 40K: Inquisitor – Martyr is still a very traditional ARPG, but with plenty of new and fresh ideas. We wanted to keep the basics and decided to add a lot of interesting and unique features. We believe we have accumulated enough experience during the making of the Incredible Adventures of Van Helsing trilogy to build an ARPG that the fans of the genre would expect and love, and at the same time we thought we can establish a framework to support brand new features like the destructible environment, the tactical approach, the cover system or the open world sandbox gameplay.

Can players still create builds for up close hack and slash play? What different classes can players customize throughout the experience?

Yes, each class can be customized to a certain extent during their progression. Hack and slash gameplay is a very integral part of most ARPGs, so obviously we wanted to keep that particular element of the game. The Crusader-class Inquisitor, for example, which we already introduced to the public last year, can be a very melee-oriented character.

What can you tell us about the skill trees and abilities that players can utilize?

There will be active and passive skill trees for each character class, where active skills are basically weapons skills, covering the various weapon choices exclusive for the given class (with some overlaps), and the passive skills provide modifiers that influence other aspects of the game. 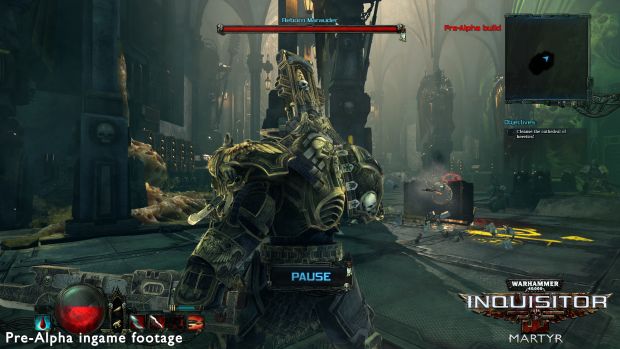 "We tried to include a wide variety of missions to make sure we cover everything that Inquisitors can or should do in this universe."

This time we tried a very different approach. As an Inquisitor, you have your own ship and you are free to roam our own sandboxed Sector in the WH40K universe. In game terms, it means that the Sector has a Star Map, which we will unlock gradually. On the Star Map you’ll see all the available sub-sectors with all the star systems, which contain all the available POIs: each PoI can have a mission attached to it. When you go on a mission, you enter a traditional ARPG map with special objectives and enemies.

What kinds of missions can players look forward to? How well will these scale for co-op action?

We tried to include a wide variety of missions to make sure we cover everything that Inquisitors can or should do in this universe. They are the secret agents of the Imperium of Man, after all, so it’s quite a long list, fortunately. Currently we might have already nailed down a couple dozen different mission types, ranging from purge missions through retrievals to objectives where you have to hunt down a specific creature, defend Imperial bases or infiltrate heretic hives… and these are just some examples. Our main priority is diversity. For the very same reason we are going to use random-generated levels where we build maps from pre-generated segments. However, the sandbox world also includes special chains of missions that we call Grand Investigations, customized short campaigns where each mission ends with discovering clues that might lead you to another mission and another clue. It’s an ARPG, so as  we discussed before, each investigation takes you to a traditional ARPG map in the end. You can play almost all missions in coop (up to 4 players), the exception being the single player campaign, obviously.

Scaling is another segment where we wanted to evoke the sense of brutality that pervades this grim dark future. This is a sandbox universe where the threat level will not scale up with the character progress, so you can always find places – planets or star systems –, where you are still not ready to enter, and we are willing to show you the hard way that you might want to level up a bit before you tackle that particular challenge. You can always try to defeat these obstacles by teaming up with fellow players, but this won’t make the challenge rating change.

We’ve heard quite a bit about the end-game that Warhammer 40K Inquisitor Martyr will feature. What can we look forward to and how will players be gearing up? Will there be a variety of missions in similar areas but with different modifiers like Van Helsing?

Inthe traditional sense of the word, we don’t have an “endgame”. What we have instead is a persistent sandbox sector with hundreds of missions becoming gradually available, a single player campaign included, which is also accessible from the Star Map as a very, very special set of missions, a self-contained story told through cut scenes and dialogues. You can always switch back and forth between the single player campaign and the open world missions. 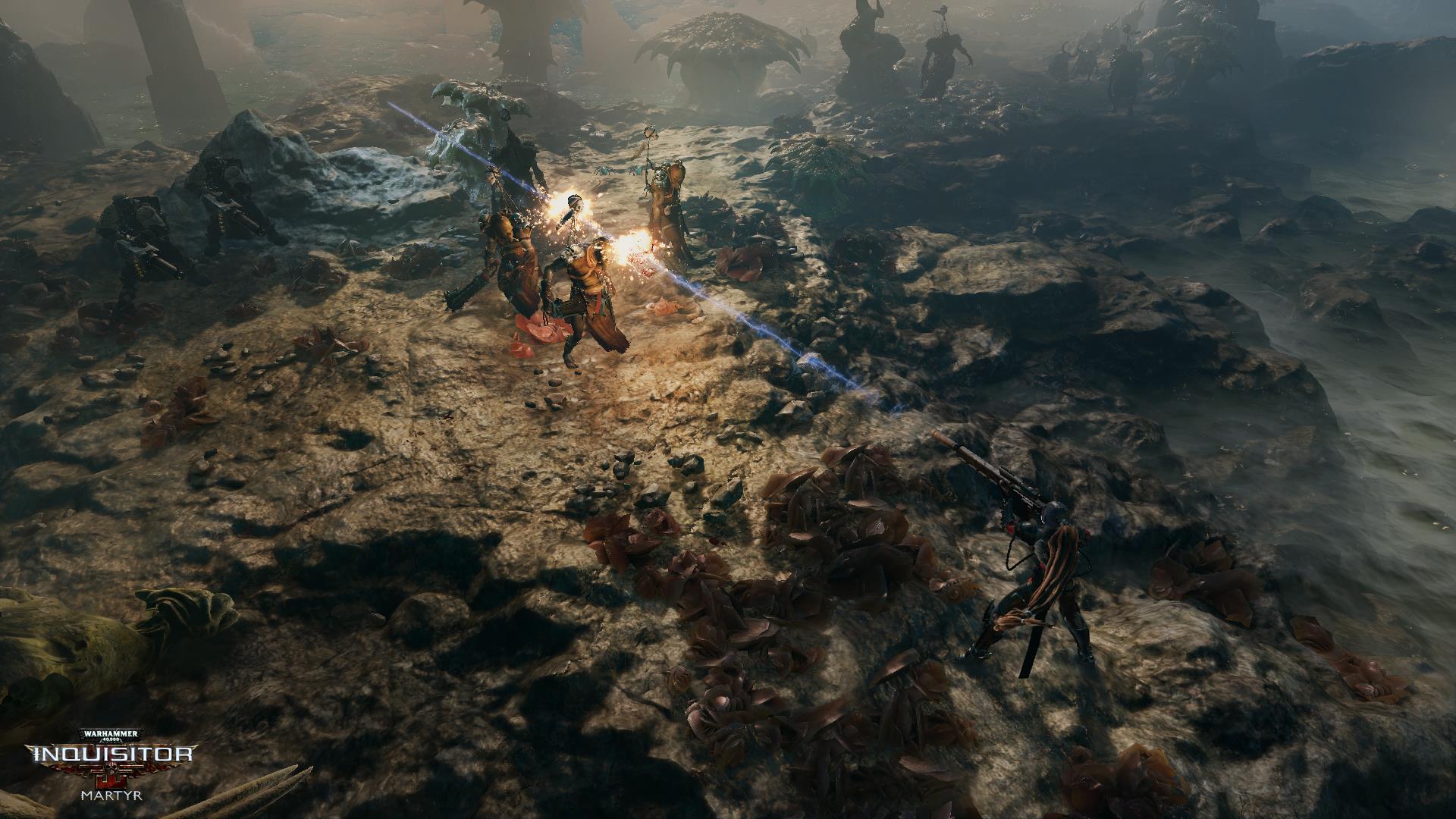 "In the current stage of development it’s too early to talk about optimization either on PC or consoles. Our standards are quite high considering graphics and we definitely aim as high as possible."

How long of an experience can players expect, especially with the end-game missions in mind?

For the various reasons explained above, it’s a difficult question to answer. We estimate that with the random-generated maps, the investigations, the persistent, growing world and the constant new material we are going to offer, you can play WH40K: Inquisitor – Martyr for a very long time.

What do you have planned for post-launch updates to further add on to the game?

The world of WH40K: Inquisitor – Martyr is an ARPG sandbox that we want to keep fresh and exciting through expansions and free and payed DLCs, which will introduce new stories, new races, new content to our world.

If Warhammer 40K Inquisitor Martyr is a success, will there be plans to develop other games in the franchise?

It’s a bit too early to talk about future plans, but one thing is for sure: we love the WH40K universe and we wouldn’t mind spending as much time there as possible.

Is Warhammer 40K Inquisitor Martyr going to run at 1080p and 60fps on both the PS4 and Xbox One?

In the current stage of development it’s too early to talk about optimization either on PC or consoles. Our standards are quite high considering graphics and we definitely aim as high as possible. We’ll see in due time if we can optimize the code to make WH40K: Inquisitor – Martyr run at 1080p at 60 FPS – that’s all we can promise at the moment.

I am sure you must have heard about the upcoming PS4 NEO and Xbox One SCORPIO. From a development perspective what kind of advantages will these new and upgraded consoles bring to games development due to their additional power?

When it comes to PS4 Neo and Xbox One Scorpio, our hands are somewhat tied. The new, upgraded hardware makes higher resolution and higher FPS rates possible, which we would love to take advantage of, but we wouldn’t want to rework our games in order to make them look different or run in a different way on the new upgraded hardware. It’s not a new console generation and we think it wouldn’t be fair to people who had already bought the game.

"At the moment we’d rather refrain from any comparisons between the NEO and the Scorpio."

Microsoft certainly seems to be pushing 4K gaming with their upcoming Scorpio launch next year. As someone who is been developing games for a long time, will you push for 1080p/60fps or 4K/30fps on the new Scorpio?

It’s still too early to talk about such technical details. As experienced developers for the PC, though, we would certainly consider putting that decisions into the players’ hands and let them decide if they want higher resolution with a lower FPS rate or lower resolution with a higher FPS rate.

On the other hand we have Sony, whose NEO reportedly has a weaker hardware compared to Scorpio. Given the current trend of better performing games on PS4, do you think Microsoft will finally have a one up on Sony in the performance/resolution department when the NEO and Scorpio launch?

At the moment we’d rather refrain from any comparisons between the NEO and the Scorpio. Each of them is a unique hardware with its distinctive software environment and we are happy to work with both. Surely there will be games performing better on NEO, other games would favor the Scorpio, but the bottlenecks are always different during each and every development. Development teams sometimes prefer working on one particular platform or they have more experience with the other, which means that this is a very complex process where the hardware is the foundation of the project, but there are numerous others factors in play as well.

Is there anything else you want to tell about our readers before we let you go?

We really shouldn’t forget to mention the release date! WH40K: Inquisitor – Martyr is coming out in 2017, on PC first, then a little bit later on PS4 and Xbox One as well.