T ecmo Koei is known for a few series, but none are more infamous than their Warriors series and all the different offshoots to it. Take a setting, typically Feudal Japan or an alternate history version of previous and then go off to be the biggest badass you possibly can through slaughtering the literal thousands of cannon fodder enemies before you.

Regardless of which setting it chooses, Warriors games can consistently be commended for the hectic feeling of a war zone and sheer power fantasy to be found in decimating whole units at a time. Warriors Orochi 3 Ultimate is my first foray into the franchise, in the interest of full disclosure, and Warriors Orochi 3 was certainly sure to put its best foot forward. 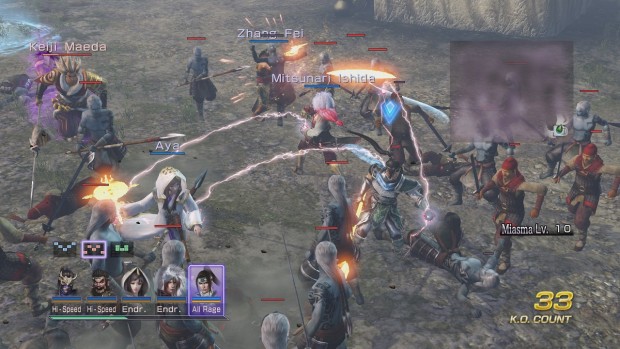 " You can challenge the Hydra again at any moment, but should you advance before you’re ready, be prepared to get mangled as badly as the enemy armies. "

Warriors Orochi 3 opens with a leaf from the Gears of War book, with humanity on the defensive from a giant, mysterious Hydra and the demon armies that it commands. It tosses you right into the thick of battle after a brief controls tutorial, and allows you to get right into what the game does best. Despite any efforts you put up though, you simply aren’t strong enough to fell the beast and retreat.

Being the obvious third part to a series, there is a degree of backstory here that isn’t found by jumping right in. Cursory research suggest this particular series is a mash-up of Dynasty Warriors, Samurai Warriors, as well as characters unique to itself and even other Tecmo Koei properties such as Ninja Gaiden.

I suppose that would make this some kind of Tecmo Smash Bros, with a dash of the storytelling from recent Bioware RPGs. You can challenge the Hydra again at any moment, but should you advance before you’re ready, be prepared to get mangled as badly as the enemy armies. 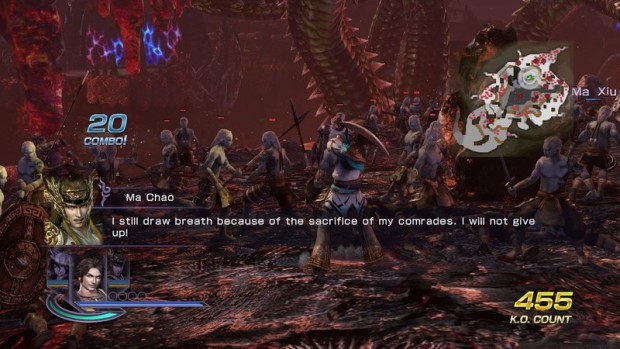 " Hundreds of solders can swarm the battlefield at once, though they don’t ever do much outside of walking into your weapon. "

After your first tussle with the Hydra, you come across Kaguya, a resident of the mystic realm and has the convenient ability to command time. This opens up all kinds of loopholes in service to the gameplay, if only just to make more sense of why you can retry missions within the plot.

To return to an earlier analogy, the driving goal here is to build up your ranks through traveling through time and altering events that took the lives of comrades, before trying once more to take the Hydra. How successful you’ll end up being depends heavily on how many characters you can save from their fate.

The story is far from the meat of the game anyways (in many ways, more like the gristle). The moment to moment gameplay maintains the map management and hectic battles that Tecmo should by every right have down to a science by this point. Hundreds of solders can swarm the battlefield at once, though they don’t ever do much outside of walking into your weapon. 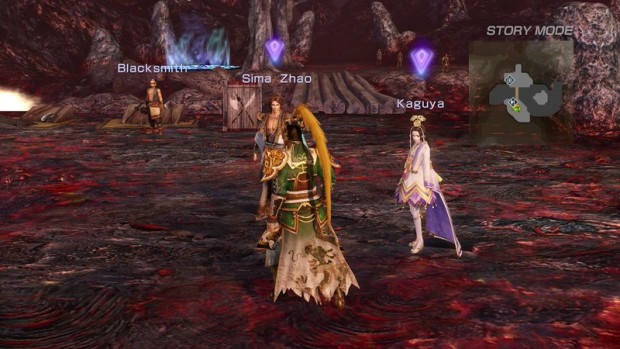 " Without a real dash function, crossing the map to meet the enemy can be a chore and leave you without something to kill for upwards of 5 minutes at a time. "

Dispatching them couldn’t be easier either. While each character technically has separate movesets, you’ll only need them on the hardest of difficulties and missions. You’ll take three characters at a time into a battle, and chaining attacks together using the character swapping and random button input to keep up momentum.

Combat still isn’t overly engaging for the majority, but the map management and army moral still please. Trying to take down every enemy will drive you nuts, so the game flows much better when you keep an eye on the situation as a whole. Bringing down units to the point where they aren’t a huge threat is fine enough, but then its off to meet another advancing unit while pushing ahead yourself or backing up NPC generals on your own side. As for the army that fights for you, they are about as useful as their enemy counterparts. Though both sides get affected by moral, and solders will do better when their side completed a major play, and conversely do worse when they need to fall back.

The actual mission objectives don’t vary drastically, mostly demanding you capture up to a certain point or down a specific enemy general. Both tend to come down to the exact same thing, take out the fodder. Without a real dash function, crossing the map to meet the enemy can be a chore and leave you without something to kill for upwards of 5 minutes at a time. Even enemy generals don’t pose a huge threat, simply taking more of a beating and perhaps asking a bit of finesse from you on the block button. 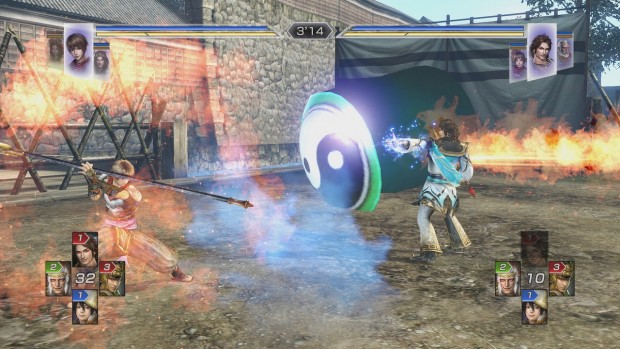 " There are a variety of other modes to play around with, but none of them drastically change the moment to moment gameplay, at least not for the better. "

There are a variety of other modes to play around with, but none of them drastically change the moment to moment gameplay, at least not for the better. Museo Battlefields is a basic senario editor, and allows you to change up which characters appear on any cleared maps, as well as what they’ll say and what you need to accomplish to achieve victory. It’s about as featured as you could expect, but still takes a specific mindset to enjoy.

Alternatively, the Gauntlet mode takes the game on with a more arcade approach. Inviting you to command five characters at once on a battlefield, you can command their formation and jump between them on the battlefield while you navigate through far less story driven battles. The driving goal behind this mode is activating certain points on the map, opening chests and trying to reap as many rewards as you can.

The balancing point is the evil energy in the area will grow the longer you dawdle, and the enemies with grow more powerful as a result. It’s a risk/reward system that puts an interesting spin on the same game that you were otherwise playing, if nothing else. Finally, Dual mode, which takes away everything else and tries to turn the game into a very poor, 3V3 fighting game akin to Marvel VS Capcom. It has some modifier attacks in the form of cards that can be used, but they make little difference, and honestly if you and your friends are advanced enough in Warriors combat to find nuance and worth in this mode, you aren’t reading this review because you care what I think.

" The benefit of the PS4 comes in the technical stuff, with a framerate set in stone regardless of how many enemies flood the battlefield. "

Wrapping all of this up is a rather underwhelming presentation. Music is rather bland and forgettable, delivering asian and rock undertones to the hectic battlefield. Textures are muddy and look like they belong on the PS3. Voice acting isn’t translated at all, which might bother some. The benefit of the PS4 comes in the technical stuff, with a frame rate set in stone regardless of how many enemies flood the battlefield.

Warriors Orochi 3 Ultimate brings out the best impression that Warriors really could, and can be commended for many things. It by every right has the gameplay of the series down to not only a science, but down to a simple universal force. The literal tons of content will keep someone who gets into it busy for hundreds of hours. Whether or not Warriors Orochi is for you can be discovered with fifteen minutes in a demo from this or any of the other entry in the series, but this one made me at least a little bit of a believer and something i could cautiously recommend.

It’s still Warriors, and brings everything that entails along with it. Visuals are subpar, even if it gives perfect technical presentation in exchange. Many of the alternate modes do little to change up the game, if they’re even worth playing.

Final Verdict:
GOOD
Warriors Orochi 3 Ultimate is still very much Warriors. If that’s not a thing for you then this isn’t going to change your mind. If you were going to try to jump in though, Warriors Orochi 3 is an excellent point to give it a shot.
A copy of this game was provided by Developer/Publisher/Distributor/PR Agency for review purposes. Click here to know more about our Reviews Policy.