Leaks are sprouting everywhere for Ubisoft’s next open world title.

A site banner on IGN (discovered by PureXbox) for Watch Dogs 2 went up earlier than planned by the looks of things. Besides showcasing the new protagonist, it also confirms that the open world sequel will be out on November 15th 2016, which seems pretty much in line with everything Ubisoft has been telling us about a release date this year.

Clicking on the banner would actually take you to the main site for the game and a countdown timer leading to the reveal it’s trailer on June 8th. If you needed any more confirmation that it wasn’t meant to go up this early, then there it is.

Watch Dogs 2 stars a new protagonist, one who doesn’t seem to be afraid to accessorize more than Aiden Pearce. The game seems to still deal with volatile street gangs and crime, if the side images are any indication. The full reveal of the trailer will be at 9 PM PST tomorrow so stay tuned for more information. 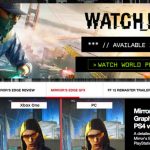