Posted By Rashid Sayed | On 27th, May. 2014 Under Article, Reviews | Follow This Author @GamingBoltTweet

Watch_Dogs is best described as a marriage between Splinter Cell and Grand Theft Auto V, with Far Cry 3 and Assassin’s Creed as attendees. It’s a bit odd that Watch_Dogs derives its inspiration from so many games but still manages to provide a unique experience. Back during E3 2012, Ubisoft showcased the so-called “future of gaming” with an impressive showing of Watch_Dogs and since then the title has suffered  a number of debacles like visual downgrades, release delays and claims of Ubisoft not delivering the ‘next-gen’ thrills and frills with this new IP.

Watch_Dogs puts you in the shoes of Aiden Pearce, hacker extraordinaire and technology buff. The game’s story is one of revenge as Aiden seeks to avenge his niece’s death. The player needs to manipulate Chicago’s security system known as CtOS in order to retrieve information about his enemies. The game starts off slow but as you invest your time and effort into it, the player will find plenty of meat to the game’s plot. Watch_Dogs successfully manages to convey that all of your online information is available out there, waiting to be hacked. On a whole, the game manages to sway itself from B-grade storytelling, a mistake that almost every new IP does these days. 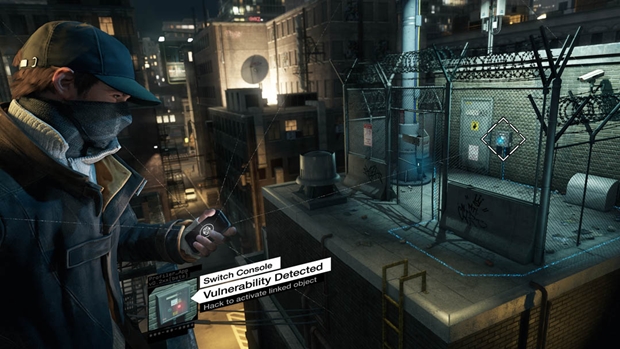 "The soul of Watch_Dogs is hacking and it’s by far the most intriguing feature that has been implemented in a video game. Using your ‘smart’ phone, Aiden can hack into just about everything."

The soul of Watch_Dogs is hacking and it’s by far the most intriguing feature that has been implemented in a video game. Using your ‘smart’ phone, Aiden can hack into just about everything. Aiden can access bank details, NPC information, blow up explosives and gas pipes. Furthermore, the player can also raise/lower bridges, initiate road blocks, hack trains and traffic signals. There is literally an endless list of things Aiden can hack and it all ties into a skill tree. As the player completes missions Aiden will earn skill points which can be used to unlock a wide variety of specializations in hacking, which will give the player the ability to carry out even complex and highly enjoyable hacks like blowing up a generator and neutralizing vehicles.

Watch_Dogs features an intuitive combat system allowing Aiden to carry all the weapons the player may pick up or buy from a local ammunition store. Unfortunately the player cannot upgrade these weapons but instead more powerful options are available in separate gun classes. Along with the usual firepower of a grenade launcher or sniper rifle, Aiden also has the ability to slow down time, known as “focus”, which is useful for taking headshots, bringing down helicopters and blowing away vehicles.

There is also a decent crafting system available, allowing player to craft explosives and several gizmos like ‘Blackout’. Although some may criticize the lack of an in-depth crafting system, I found it to be a decent little add-on. Similar to the ‘Hacking’ tree, players can earn a wide range of upgrades for crafting, driving and combat. In short, Watch_Dogs has an exhaustive list of skills and more importantly it actually makes the player get involved to complete several different missions so that more skill points can be unlocked.

"The AI in the game is nothing we have seen before - they will call for backup, follow you wheel to wheel and also find alternate paths should you block the road using one of your hacks."

As the game is based around hacking, the mission structure in Watch_Dogs is vastly different from other open world games. The game does away with generic missions like escorting a contact from point A to B and uses hacking as one of the fundamental elements in its mission flow. Using a combination of stealth (or firepower), the player can infiltrate an enemy stronghold, profile enemies using the smart phone; take out criminal convoys, and unlock CtOS towers.

All of this may sound generic on paper, but the intuitive use of hack-able objects like cameras adds dynamism to the gameplay, forcing the players to use their wits to overcome a situation. The system gives you the choice to go in stealthily or go in all Rambo-like, but remember there could be repercussions if you choose to be aggressive. The AI in the game is nothing we have seen before – they will call for backup, follow you wheel to wheel and also find alternate paths should you block the road using one of your hacks. The combination of an intuitive AI system and mission flow, makes the campaign and side activities an absolute blast in Watch_Dogs.

Watch Dogs offers an asynchronous online multiplayer mode allowing the player to secretly hack another player and install a virus onto their smartphone. The game also features other multiplayer modes like decryption combat, mobile challenges and a free roam mode. The multiplayer mode is no doubt addictive and it’s recommended that Watch_Dogs is played online, simply because it’s meant to be played that way. "Ubisoft has delivered a true next gen experience with Watch_Dogs and although there is room for improvement, the developers have largely delivered on their initial promise."

Watch_Dogs is a visually alluring game. It’s hard not to stop for a moment and just gaze at the beautiful countryside environments or the hustle and bustle of the city during night. Watch_Dogs has a dynamic weather system which makes the game even more exquisite. Little details like the road puddles drying up when the sun comes out or man holes filling up with rain all add realism to the fictional city of Chicago.

It’s not only the visuals that lend realism to Watch_Dogs as the NPCs play a big role in making the city function day and night. There are a total 13000 unique animations in the game and all the NPCs that I have profiled have a different tale to tell. They all engage in different activities and it’s hard not to observe the random encounters that will happen during your playtime. Strong voice acting across the board backed up by a brilliant score makes Watch_Dogs a technical showcase.

Ubisoft has delivered a true next gen experience with Watch_Dogs and although there is room for improvement, the developers have largely delivered on their initial promise. There is so much to do in Watch_Dogs that can’t simply be covered in a review but this trip to Chicago is simply unforgettable.

City feels alive and active, lots of activities to get involved with, exhaustive hacking skill set, intuitive combat and AI.

Driving may take time to get used to, some minor physics glitches.

Watch_Dogs delivers on all fronts providing the player with intense gameplay mechanics and an intriguing mission structure.

A copy of this game was provided by developer/publisher for review purposes. Click here to know more about our Reviews Policy.
Tagged With: pc, ps3, ps4, Ubisoft, ubisoft montreal, Watch Dogs, wii u, xbox 360, Xbox One