Draws inspiration from Ico, Windosill, Spirited Away, The Life of Birds, and much more. 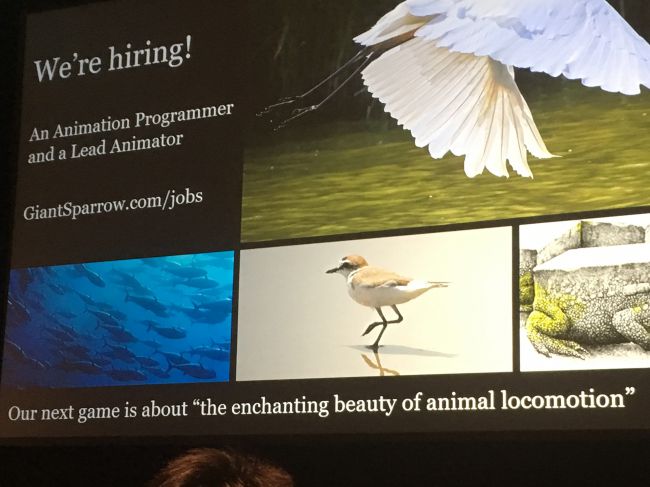 Giant Sparrow made quite the impact last year with its long-in development adventure opus What Remains of Edith Finch. At a recent GDC panel, creative director Ian Dallas teased the studio’s next big project which is all about the “enchanting beauty of animal locomotion”. The presentation’s final slide featured birds, a strange toad and some fish. The studio is also looking for animators to join.

Over on the game’s official website, Giant Sparrow notes that it’s “still very early in development.” However, animation will be a huge focus “as a means of conveying mood, revealing character, and providing for player expression.”

But wait, there’s more. The project’s description says that it’s “drawing inspiration from works like Ico, Windosill, Spirited Away, The Life of Birds, and the spirit of Winsor McCay and early Disney films like Bambi and Fantasia that used (for the time) cutting edge technology to build something that didn’t feel technical at all, but instead felt personal and enchanting. That’s our hope anyway.”

It should be interesting to see how this plays out, especially given the team’s stellar work on The Unfinished Swan and What Remains of Edith Finch. The latter actually drew a fair amount of acclaim for its handling of themes like death and was built off of 13 different game prototypes that formed its foundation. You can check out our official review of the game to learn more about it. What Remains of Edith Finch is currently available for PC, Xbox One and PS4.