What Went Wrong With Bionic Commando?

It’s been well over 3 whole decades since the likes of Nathan Rad Spencer came swinging into our arcades and on our Nintendo Entertainment Systems with that special brand of platforming and shooting that only a Bionic Commando game could’ve given us. The game was a huge hit at the time in the arcades for its unique grappling mechanic that would send you swinging and flying over gaps. As such, an NES port was made. While this version upped the level count, the important thing was that the game’s concept and fun-factor carried over to the console space effortlessly and the franchise would grow in popularity steadily for the next couple of decades.

Despite that, where do we see the franchise at now? It’s more-or-less in relative obscurity at this point. I’m sure there are people out there who know what Bionic Commando is and are loosely familiar with it, but obviously it’s nothing compared to what it used to be at least in terms of its popularity. But why did this happen? Why would a franchisee that was so popular that justified several sequels and even a remake now find itself relegated to the ashbin of gaming history as it is? What the hell happened to Bionic Commando?

It would be 4 years before the next Bionic Commando game would surface in the form of a remake on Nintendo’s portable Game Boy. Outside of a few cosmetic changes and changing the city of the original game to be a more futuristic one, the game play remained pretty much intact relying on the swinging, the shooting, and the jumping that fans of the original game would be expecting. Despite being a fairly faithful remake of the original game’s ideas this version of Bionic Commando would not sell very well at all despite being on a very popular handheld console. While the ideas of Bionic Commando were definitely still interesting to those who did enjoy that type of thing, as a franchise, it was starting to show some cracks in terms of its longevity and audience penetration capabilities. In light of that, the series would sit on ice for a while, before re-emerging in the year 2000.

The New Millennium would be known for bringing us lots of interesting things. Another  round of powerful home consoles to game on and a litany of interesting games to play on them would stand out quite a bit, but the year 2000 also brought us Bionic Commando: Elite Forces for the Gameboy Color. Again, while the basic mechanics of a Bionic Commando game were certainly present with the swinging, the grappling, the shooting, and the side-scrolling, here we saw pretty much everything else thrown out. Instead of the main character that we had grown used to from the previous games we now have two unnamed Commandos of either gender. The plot was more or less non-existent, and the art direction was fairly boilerplate for the time, especially considering what was coming out on more powerful systems of the era.

Despite all of this, the gameplay was okay, and it basically felt like a Bionic Commando game. It had all of the things that you would expect it to have along with a few sections that mixed things up a little bit by letting you use a sniper rifle. As a result, it would be reviewed fairly well and people who played It generally didn’t have a lot to complain about with it. Unfortunately being stuck on the Gameboy Color in 2000 pretty much guaranteed that it wouldn’t have a whole lot of market penetration and wouldn’t do a whole lot of favors to the franchise that was already struggling to find its footing with modern audiences. This would be a trend for the series that unfortunately would continue well into the next several entries.

Another many years would pass before Bionic Commando rearmed would officially launch on PSN and Xbox Live Arcade as a digital only experience. This game would add 3D polygons resulting in a jump up in production value overall while retaining the same facets of the original games that made them what they were and made them fun. Fortunately,  this game was not just a rehash of the previous games’ ideas, but instead would iterate on them in interesting ways with different camera angles, some new abilities, and a really striking art style that made the foreground characters pop off of the background in a way that many games seem to be unable to achieve these days. 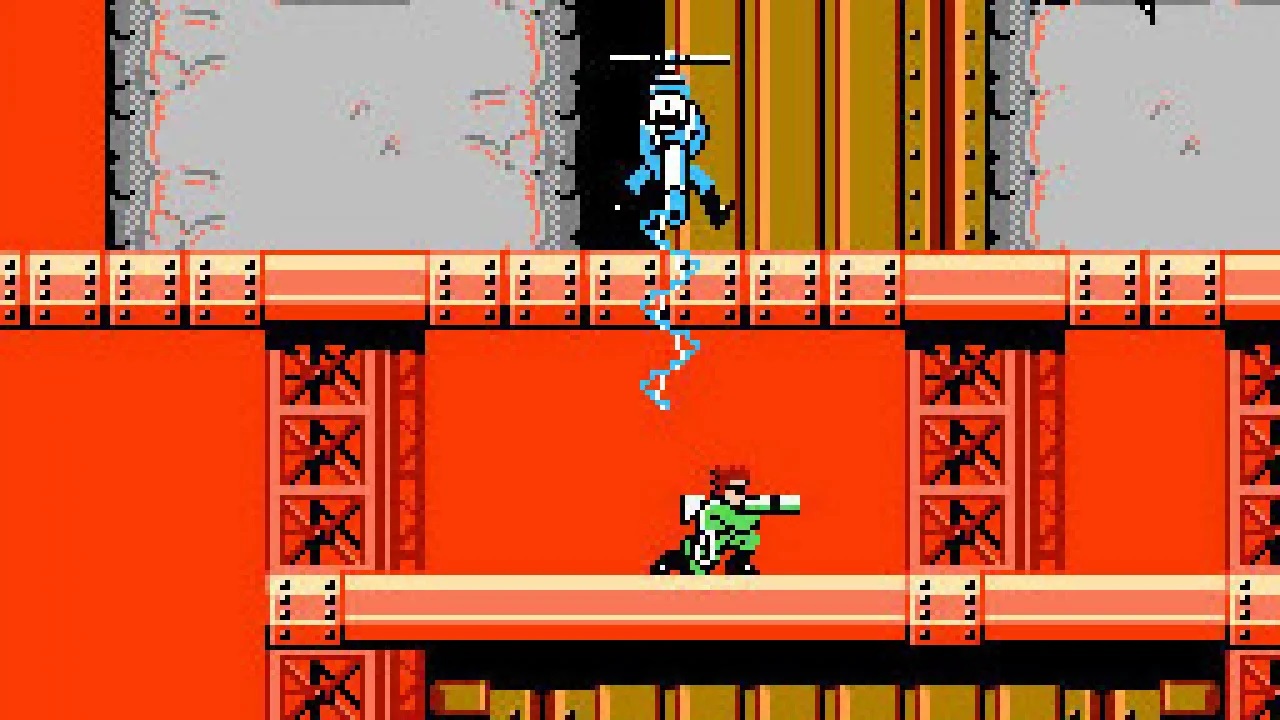 The addition of a multiplayer mode was also nice to see although the real star of the show here was the main campaign. The game would, as a result of the fresh ideas and respect for the source material, review pretty well with mainstream gaming critics. Unfortunately while its sales were pretty good for the time given that it was a digital only release it did have a bit of a ceiling that it couldn’t quite overcome much like how several of the previous games were limited to the constraints portable consoles and outdated technology.

The following year, in 2009, Bionic Commando would be released. don’t let that name fool you though because this wasn’t an actual reboot as much as it was a forward-thinking sequel looking to revitalize the franchise. I always find it annoying when sequels don’t name themselves like a sequel and we’re forced to sort it out years later with a bunch of confusing titles, but nevertheless Bionic Commando 2009 was the series is biggest push yet to appeal to modern audiences with a AAA looking polished third person action adventure presentation  that still held onto a lot of the basic tenets of the original games with lots of swinging, shooting, and platforming. This game had pretty good graphics and overall production value for the time, as well as a much meatier story that thankfully doesn’t get in the way of the gameplay like a lot of action adventure games of the time did.

Unfortunately, despite the solid attempt at a real modern take on the franchise that it actually deserves, the game would suffer from mediocre gameplay and fairly linear style that, while fine for other games of the era, never quite felt right for this one. Couple that with the fairly janky frame-rate and a handful of flawed level designs and you have a game that is ultimately alright, but also destined for the bargain bin, as many other, much better games were coming out in 2009 like Batman: Arkham Asylum and Borderlands. Bionic Commando 2009 was fine in its own right, but it just couldn’t stand up to that stiff competition. It was perhaps a bit out of its league in that regard. 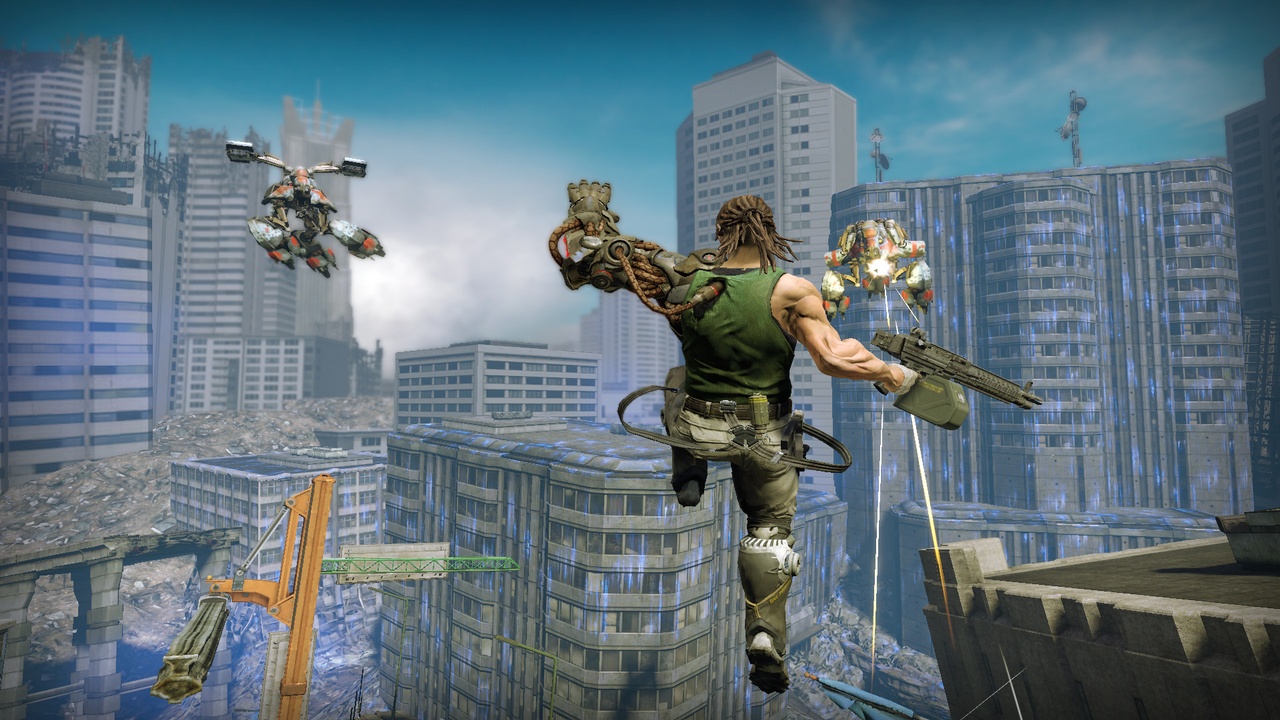 In 2011, Bionic Commando would take one more stab at success with Bionic Commando Rearmed 2, a sequel to a reimagining remake from 2008, that was arguably the best game in the series so far. Much like Bionic Commando rearmed the presentation and the graphics and the gameplay we’re all fairly solid and did justice to the ideas of the original games. Despite finally adding the ability to jump the game fails to really innovate in any major way. While the overall aesthetic of Bionic Commando rearmed definitely returns in this one for some reason it just looks darker and less interesting than its predecessor. One thing it did nail is the ability to go back and replay sections with newly acquired abilities that made those levels feel fresh and that’s something that the older games also had in their corners.

Despite this, the conservative nature of the game and its inability to really innovate in any major way caused it to review perhaps worse than any other game before it cumulatively.  As if the series hadn’t struggled to find its footing enough before this, Rearmed 2 would serve as the final nail in Bionic Commando’s coffin, at least for the time being. That said the series does seem to have a pattern of going silent for about 10 years and then showing up with a new game. If that pattern holds then where I guess we’re due for another one anytime now. I, for one, am totally fine with Bionic Commando getting as many chances as it needs. However, I’m not so sure that Capcom agrees.