Wii U Had One Of The’ Worst’ Launch Line Up Score Average, along with Wii And PlayStation

Nintendo Wii U's launch has been a mixed bag.

Nintendo’s Wii U is out and the system boasts of plenty of launch titles only behind PlayStation 2 when you compare the quantity of titles released. There’s the Mario game which has garnered decent scores but the others? Games like ZombiU have critically not faired that well with a lot of polarizing reviews.

In an excellent piece by Gamasutra, they have compared the launch title averages of different systems and it looks like the Wii U hasn’t fared all that well. The reason is because games like Assassin’s Creed 3 and Batman: Arkham City which have scored very highly on PS3, Xbox 360 and PC, but have underperformed on the Wii U.

However, as Gamasutra notes, “The Wii U has had the most titles available at retail for launch since the PlayStation 2 over 12 years ago.” 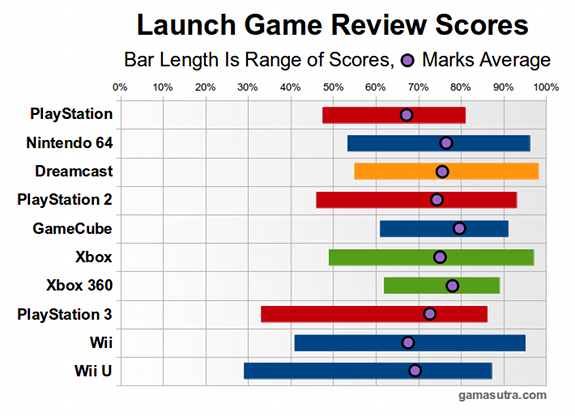 It’s up to you to decide if you want quantity over quality, but that doesn’t mean the Wii  U doesn’t have any quality games. As mentioned above, New Super Mario Bros. U and some other games will keep Wii U owners busy for a while until Nintendo eventually bolsters the lineup, but for now the launch titles aren’t that impressive when it comes to sheer quality like the GameCube, which tops the list.

You can check out our review of the Wii U hardware over here. Tell us what you think in the comments section below.