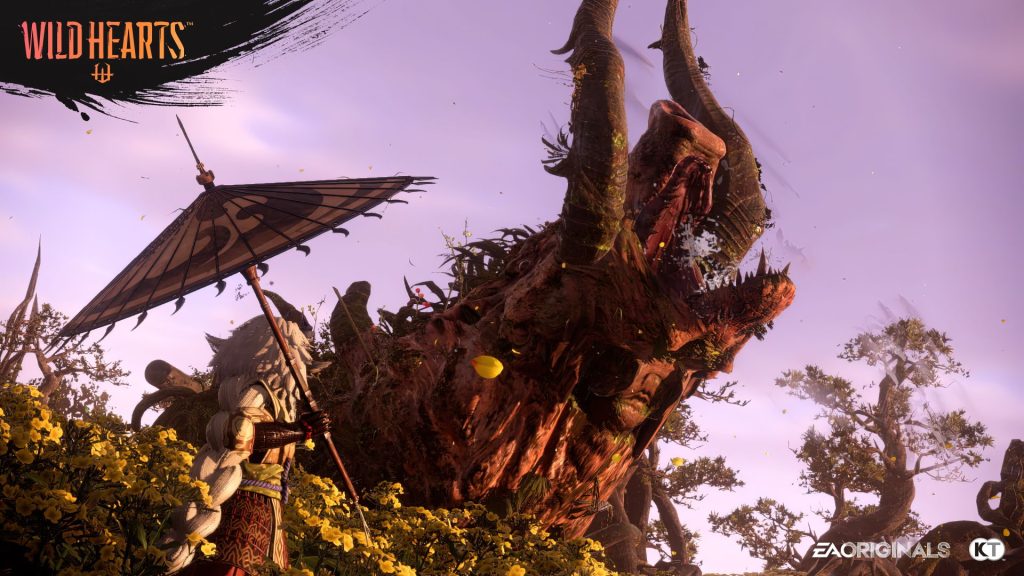 Various new previews have dropped for Omega Force’s WILD HEARTS, providing a better look at different Kemono. Along with the Kingtusk, we also see the smaller Ragetail and fire-wielding Sapscourge in action. Check them out below courtesy of Dengeki Online, Arekkz Gaming, and others.

In addition, there are more details from IGN’s preview to be aware of. As it’s been established, Karakuri can be used to build various structures on the field. It requires thread, but fortunately, they’ll persist until you or a Kemono destroy it. Dragon Karakuri refers to more permanent creations like a hunter’s tent for resting or a flying vine for zip lines.

Think of these as the Delivery Requests in Monster Hunter World, with used to set up new camps, elevators, and zip lines. The difference is that you can destroy a Dragon Karakuri if you need resources. Be careful though, as these spots aren’t marked on the map, so finding them again can be difficult.

Only one of the four hunting grounds, Hanagasumi Hill, was played and along with gorgeous vistas, there’s plenty to discover. Dragon veins are tied to fast travel. There are also ingredients for meals and resources for equipment to discover. You can also find 50 Tsukumo, which unlocks a hunting companion that gains more buffs as you discover more. There are other secrets in store, but we’ll have to wait and explore these for ourselves.

While the Toukiden influences are present, Omega Force also mentioned that WILD HEARTS isn’t a spiritual successor but a new game that it wants to evolve into a new series. If it’s successful, we may see even more titles (if not expansions for the first game).