Facebook
Twitter
Reddit
Heavy Rain is an upcoming PS3 exclusive that is currently planned to be released next year. It is developed by Quantic Dream who were behind Fahrenheit (Indigo Prophecy in North America) and Omikron: The Nomad Soul, both of which had a large emphasis on story. Fahrenheit in particular had a great deal of focus on the narrative and story elements of the game rather than the core gameplay. Heavy Rain looks to take this focus even further and if the concept is executed correctly, it could revolutionise gaming.

Heavy Rain tells the story of four different characters, each with their own different and personal involvement with the events of the game. Little is known about the story as a whole but all of the characters are searching for “The Origami Killer” for one reason or another. There have been no details on the Origami Killer though; information on the story is scare which will keep players relatively unknown of it until they actually have it in their hands.

The four characters seem to be very fleshed out so far and definitely have a lot more to them than the majority of recent games. Madison Paige was the first character announced who is a journalist who is trying to report on the Origami Killer. As with most of the story elements, not much has been said but Madison does end up in a strip scene. David Cage (CEO and founder of Quantic Dream) stated he wanted to make this scene feel unpleasant for the gamers. The scene shows her being held at gunpoint, forced to dance topless for him. Even with just a small extract it did feel rather uncomfortable. 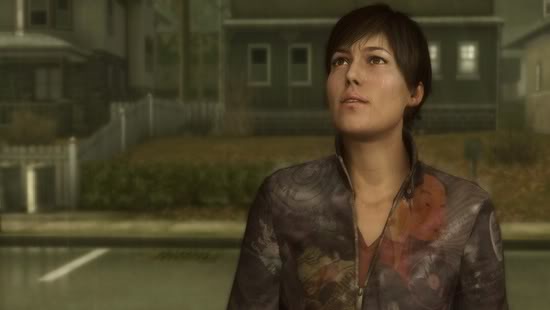 There is a huge amount of detail in Madison Paige, and this was one for the first screenshots.

Even though there is a lack of details about Madison, you can expect some very deep moral choices coming into play with her and the other characters. This isn’t like Fallout 3 and Fable 2 etc. The world isn’t going to blow up depending on your choices but something a lot deeper will occur, something more personal to you and the characters. One characters choice could even affect a different character too.

The second character to be announced was Norman Jayden who is part of the FBI. We see Norman in a construction yard area to which he is investigating. Of course things don’t turn out all well due to the choices made in the demo shown and lead him to a near death situation. If you play the scene differently you should be able to avoid that situation though, if not there is a chance that character could die and his story could come to an end.

The characters won’t be able to die until about three quarters of the way through the game so it gives you plenty of time to connect with them and see them develop. You will be making the choices that could get your characters killed or save their lives, it’s all about choosing what you want to do and see how the events unfold.

In the near death scene, Norman is trapped in a locked car which is about to go into a crushing machine. You are able to escape though. Action scenes like this will pop up in the game; it’s not just a dramatic story being told. The scenes will take place through quick time events. A lot of people dislike these but Heavy Rain could really benefit from this method. It may not be the most exciting way to play the game but it will allow emphasis to be placed on the events happened rather than being fun. This isn’t a game that tries to be fun; it’s a game that tells a story and wants the player to feel emotionally connected.

The next two characters were announced at the same time: Scott Shelby and Ethan Marr. There has been next to no details on Scott except for that he is a private eye investigating on the Origami Killer case. Ethan, on the other hand sounds like a very interesting character already. Ethan is an architect and a family man with two kids and a wife. One of his kids disappears and Ethan is determined to find him which leads him onto many currently unknown events. 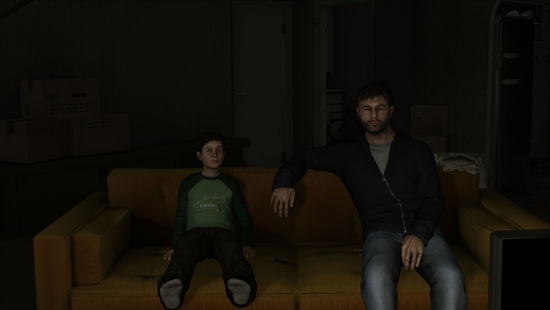 How will you tackle this scene?

One of Ethan’s scenes has been detailed though. Before his child is kidnapped he gets to spend time with him and it’s up to you what you do. If you want to sit in front of the TV and let the child do everything himself, you can but if you want to cook his dinner and help him with his homework you can do that too. I haven’t played this scene but it sounds like there will be a heavy emphasis on the development between both of these characters. This development will be affected by your choices throughout the game but I have a feeling that Ethan’s opening scene may have quite a lot of impact on the rest of the game.

Heavy Rain looks like it will take storytelling and character development to a whole new level. There is going to be a large emphasis on narrative which looks to be unmatched by any other game of this generation. If Heavy Rain pulls this off we could feel emotional bonds towards characters on a much larger scale than ever before.