Remember Breakout? The game where you had a ball on a paddle, bouncing towards bricks on the top half of the screen, that would get destroyed as the ball touched them? The classic Atari arcade game, mimicked countless of times the world over, in authorized and unauthorized clones? Remember that game? It was an incredibly simple concept, more or less a single player version of Atari’s earlier hit, Pong, but it was so stunningly addictive, so wonderfully satisfying, that it inspired entire people who then went on to influence industries.

Breakout was an incredible hit, and now, for modern audiences, the game returns again, slightly tweaked, by developers Beatshapers, notable for porting hits from other platforms (mostly iOS) to Sony’s Playstation Mini program. Under the new moniker of ‘Wizorb,’ the classic formula returns yet again, and the game remains as captivating to play as it ever was, with some notable concessions made to modern audiences and gaming trends. 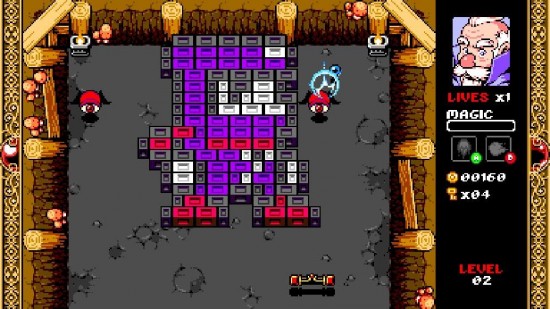 And I’m not talking about the graphics or the sound either- the original Breakout was an arcade game displayed on a monochromatic screen, with with colored plastic pasted over it, so that it might seem to have some color, so obviously the new game looks better. And it definitely sounds better than its primitive progenitor. As a matter of fact, it looks and soundsgreat. It has a neat, polished, curved look to it, with bright colors and quirky music, looking and sounding like something of a mid era SNES game.

But no, the graphics and the sound were not the concessions to modern audiences that I was talking about. Rather, I was referring to some gameplay changes and tweaks, that many purists will probably balk at, but objectively are probably made for the better.

The problem is, the original Breakout is an old game. It was made for a different era. We’re talking about a game made when arcades were still the primary method of video game consumption, a game made when a single knob for game control was considered groundbreaking, a game made for black and white screens with plastic pasted over them, to save costs. It was a different time, a different world. Most notably, made for the arcades as it was, the game was designed to maximize the number of quarters it could reasonably extract from any player, and thus, its gameplay and difficulty balance was what we can only say was a wee bit unfair (something that later ports and clones almost surprisingly failed to fix).

Wizorb fixes all that. It has some notable gameplay changes, such as more varied levels that really challenge the player to think about how he wants the ball to bounce off the bricks, while dodging dangerous obstacles and bricks. For instance, Wizorb provides the player with magic powers: there’s an explosion that takes stuff out in the vicinity, the ability to redirect your ball using controllable gusts of wind, great for reaching otherwise inaccessible bricks, and the ability to directly control your ball itself for a while; and all of this is governed by a magic meter, which can be refilled using a magic potion. The potion isn’t always available, though, so this demands a special kind of game balance that is achieved. It also demands some thought and planning from the player. 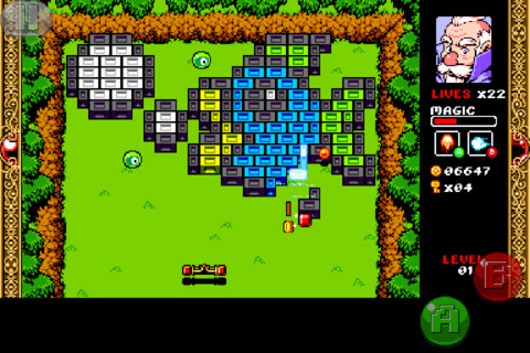 Other changes include the introduction of gold coins that the bricks often release, which are risky to collect, but yield high rewards. The game’s premise, which exists solely to justify constant brick breaking, involves a kingdom under attack, and a wizard breaking bricks to save it and rebuild it. Collecting gold coins will enable you to have enough currency to donate later to rebuild the kingdom, one brick, one house, at a time.

There is also a newfangled control scheme that is probably the most intuitive analog controller implementation ever seen for such a game, which allows for precise control over the paddle, and consequently, the ball, as well as some RPG elements thrown in just for good measure, such as the aforementioned town rebuilding. There are boss battles, there are enemies on screen that you can shoot at, secret passages and hidden shops in every level where you can buy power ups with your gold, as well on level items like power ups and healing potions, that are either static, and thus must be aimed for, or dropped by hit blocks.

All in all, then, Wizorb is the best new age implementation of the classic brick breaking genre that I have ever seen. Nostalgia dictates that I must by necessity find Breakout better, because Breakout is the game I grew up on. However, by any objective standard possible, Wizorb outdoes Breakout, and it does a great job at modernizing the concept for today’s day and age.

At $6? It is definitely recommended.

Great update of classic concept, with power ups, inventive levels, a new mix of balance, hidden areas, and RPG elements; the graphical and soundstyle is great, evoking an SNES game

Like all games of its genre, it gets repetitive, and may lack replay value

A great modernization of a classic concept, Wizorb is whole heartedly recommended.

A copy of this game was provided by developer/publisher for review purposes. Click here to know more about our Reviews Policy.
Tagged With: PS Minis, PS Vita, ps3, PSN, psp, scea, sony, wizorb