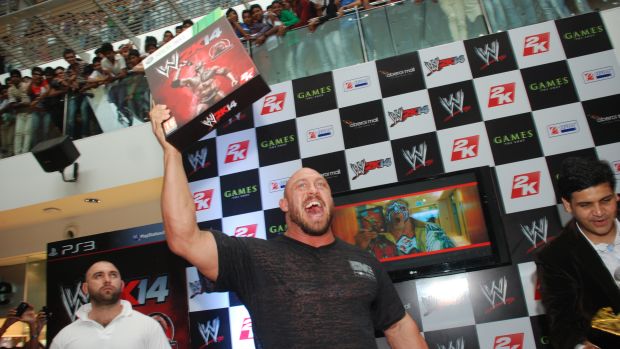 WWE Superstar Ryan “Ryback” Reeves was present in Oberoi Mall, Mumbai in an event to promote the upcoming WWE 2K14. In doing so, e-xpress Interactive Software also revealed a new pre-order offer in association with WWE India for those looking to reserve a copy of the game. This pre-order, which is an autographed championship belt from the man himself, will be exclusive to Indian fans.

WWE 2K14 will be the latest iteration of the franchise to come developer Yukes. However, it will be published under 2K Sports and developed in association with Visual Concepts. The game will feature the new “30 Years of Wrestlemania” mode which allows players to go through more than 40 famous matches from the history of Wrestlemania. Superstars such as Hulk Hogan, Andre the Giant, Randy Savage, Shawn Michaels and many more will be available to play as.

WWE 2K14 will be releasing on October 29th in North America and on November 1st in Europe for PlayStation 3 and Europe.