I have not been a wrestling fan since I was a kid and don’t necessarily like it the much so I really didn’t see how I was going to enjoy WWE All Stars.  But I could not have been more wrong as the games is loads of fun and has some of the coolest features along with what has to be the best roster in a wrestling game ever.  It has all the current most popular wrestlers you see on TV and Paperview now and all the old school wrestlers that made the sport what it is today like the Ultimate Fighter or Macho Man Randy Savage.  The list goes on to top off at 30 playable wrestlers evenly split between retired legends and current all stars.  The old school wrestlers like Hulk Hogan and Andre the Giant are portrait just as they were in their prime.  Seeing these classic characters took me back to when I was a kid and got me back into the wrestling spirit as Jake the Snake walked down the aisle and into the wring all with there own music playing with lights flashing. 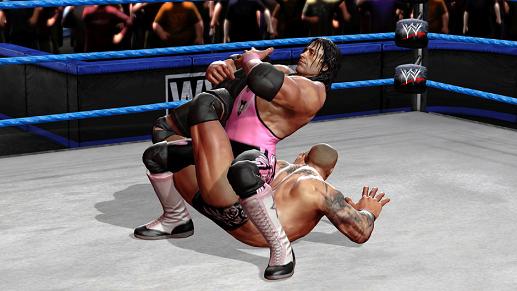 The game has a few different modes and definitely tries to bring back that good old flashy, over the top  style that wrestling once had.  You can play Exhibition, Xbox Live, Path of Champions, Fantasy Warfare and you can even create your own Superstar.  This feature is pretty damn awesome as you can choose exactly what you look like, choose how you enter the ring, with your song or choose another all stars.  You can choose you clothing, scars, the type of wrestler you are, pretty much everything and it is pretty awesome seeing your own creation come into the ring.  You can be an acrobat, a big man, a brawler or a grappler and all the wrestlers in the game have one of those style so for instance, Bret ‘The Hitman’ Hart is a grappler, where Andre the Giant obviously has the big man style.  These all come into play while wrestling even though the controls seem pretty basic.

It’s fairly easy to jump in and learn the controls, at a glance they are pretty basic.  However they are much more complex when you start to see AI doing four suplexes on you in a row on a hard difficulty.  The controls can be mastered to annihlate another player where they don’t have the option to fight back.  I like to keep is easy though as the game was fun playing through on the simplest difficultly, going through the Fantasy Warfare mode.  In this mode you are basically but up against either a Legend or current Super Star and you get to pick who you want to be each match as you progress through a series of matches.  While doing all this all footage of the wrestlers is shown in between each match hyping you up for it just like a Paperview Event.  It was quite fun I must say, all while you unlock new characters depending on who you pick to play as.  The graphics are also really well done with all the wrestlers likeness being on par even with the older retired Legends.  The moves of each wrestler are exactly what they would do in a real match well, whether it’s the way they enter the ring or their finishing move. 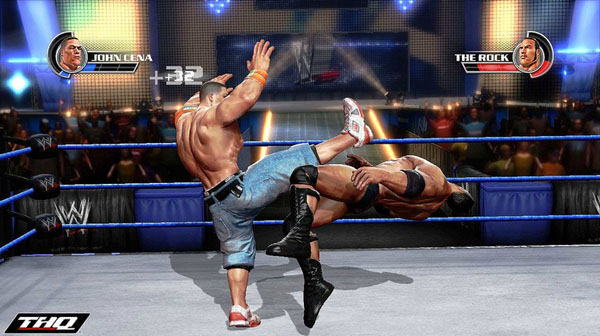 Cena versus The Rock

Things can get a little harder in the Path of Champions mode as you must win ten matches and then finally you end up fighting either the Undertaker, Randy Orton or Tag Team battle against Shawn Michaels and Triple H.  During the matches you can be fighting any of the different types including a Standard Match, Tornado Tag Team (2v2), Steel Cage where you you have to climb out of the cage, Extreme Rules Match where you can pick anything up to beat up your opponent whether it’s a steel chair or the ending round bell and lastly is Elimination which is last man standing wins out of four wrestlers.  You can play all these modes in Exhibition and on Xbox Live too.

Not only can you play all these modes in Exhibition and Online but you also have the choice to play Triple Threat which is a three wrestler free-for-all with the win going to the first to get a pin or a KO.  Then there is Fatal 4 Way which is the same thing as Triple Threat only there are four wrestlers and lastly there is Handicap which is basically 2v1.  Xbox Live can get a little laggy at times but it nothing to bad.  You can have up to four players playing locally and online which is a lot of fun to have a buddy over to tag team with.  The only real issue I had with the game were the counters and reversals, which are done by the bumper buttons.  The bumper button will appear on screen a split second after you need to press it, but when you do pull them off they are quite satisfying.  One other thing is trying to get a hold of the complex controls, you see you could easily win a match using the simple controls that are there for you but when an opponent pulls off a grappling combination that seems like it lasts a life time there is nothing you can do to stop it. 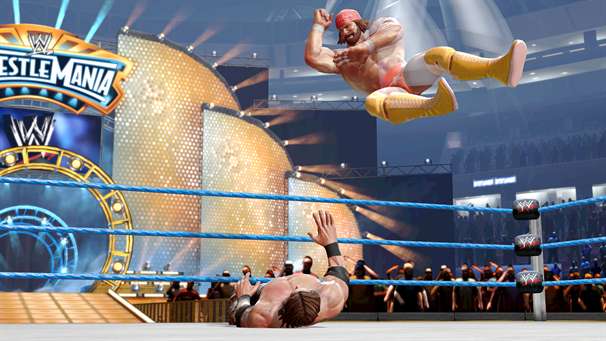 Other than the minor complexity of controls that were implemented in the game, it is a lot of fun.  For those of you who would never think of playing previous wrestling games like Smackdown vs Raw or others, this game might be what you are looking for.  I never thought I could get into a wrestling game and WWE All Stars had me hooked from the beginning, wanting to unlock all the wrestlers and arenas to laying the smackdown with my own created player.  I would have to say that if I could only have one wrestling game in my collection, this would be it.

1-4 Players online and offline. Classic wrestlers are back. Actual footage of the wrestlers and plenty of unlocks.

A simple control scheme can go to complex in a second. Slight lag online. Reversals are hard to pull off at times.

Final Verdict:
GOOD
Other than the minor complexity of controls that were implemented in the game, WWE All Stars is a lot of fun. For those of you who would never think of playing previous wrestling games like Smackdown vs Raw or others, this game might be what you are looking for.
A copy of this game was provided by Developer/Publisher/Distributor/PR Agency for review purposes. Click here to know more about our Reviews Policy.