I’m one of these uncultured (or should it be cultured) individuals who knows very little about the WWE and wrestling in general. My ten year old self was rather amused by the whole thing and a large majority of my days were dominated by Smackdown 2 and No Mercy on the PS1 and N64 respectively, (note the severe absence of friends in this equation). Returning to the weird and wonderful world of wrestling was an odd experience, and this review will no doubt also serve the purpose of documenting my nostalgic return to watching digital men in skimpy clothing hurting each other (that sounded much more heterosexual in my head, honest).

The standard fighting engine is surprisingly similar to how I remembered Smackdown being all those years ago, except a little bit slower. It feels all a bit more technical now, this being largely perpetuated by the new control scheme that uses the right analogue stick for grapples. The controls are generally smooth and intuitive, though it can become frustrating when multiple actions are assigned to one button; The A/X button being the worst offender, constantly confused my attempts to grab a weapon from under the ring with a desire to stand on the apron like a lemon. Despite these occasional setbacks and a severe lack of knowledge about the game modes, it was still fairly quick and easy to get into fun multiplayer games with the guys. There are a few uneasy animations and dodgy collision detections, and the move sets can become a little bit repetitive but it is all in all a good laugh. It must be said that WWE was clearly intended to be played in the context of a lad’s night in. 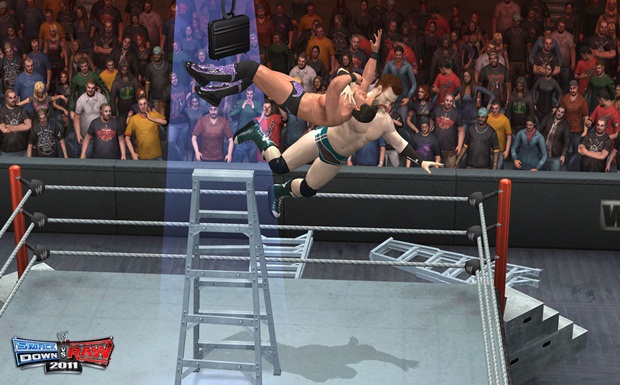 As easy as it was to jump into a quick match, it must be said that to the uninitiated the general interface and menu screen can be a little confusing. The wealth of options to create and customize your content and experience is staggering. This allows for a deeply customizable wrestling experience, but it also can make finding your way around difficult if you’re like me and don’t know the difference between a cage match and hell in a cell.

One of the most entertaining new additions to the gameplay experience is the new WWE universe. When you’re setting up a standard exhibition match you can choose to do so within the WWE universe and as you play games within the universe it will store your match results and create new stories and scenarios around these. Even during multiplayer matches in the universe you’ll get allies coming in to aid you in your fight and random wrestlers entering the fray to forward their own agendas. It certainly adds a depth and random element to the game modes, but it is a shame that it couldn’t have a more structured story counterpart. 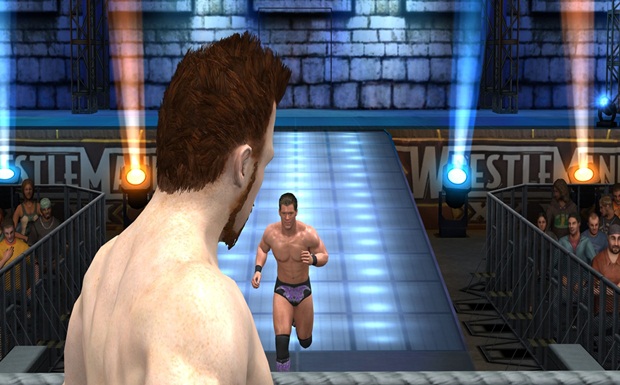 The plot threads thrown in by the WWE Universe are noteworthy, but the other single player modes are sadly lacking

I say that there isn’t a structured story mode; there is but it is just really not very good at all. I used to love it on No Mercy on the N64 the way you could create your own characters and have them chase down any of the championship belts, whereas in WWE 2011 the Road to Wrestlemania mode is divided between four of the main WWE superstars who each have their own story. You can also try and break the Undertaker’s streak in Wrestlemania using created characters, but it was such an impersonal story that it felt like a string of really boring exhibition matches rather than a solid single player campaign. The story modes for each of the four superstars try hard to create a feeling of continuity, allowing you to hang out backstage in the WWE arenas and interact with the other wrestlers. They also let you make choices that can determine how the story changes. Unfortunately both of these aspects fell flat and generally I felt like my decisions and actions were having no effect on what happened next on the story. The mode feels like a missed opportunity and the lame story lines and dodgy backstage exploration engine compound the feeling that this mode was severely rushed in comparison to other aspects of the game. It is a shame as were it not for this major gap in the armour, WWE 2011 would have been a far superior package all around.

Speaking of rushed aspects of WWE 2011, it is worth noting the rather hit and miss nature of the game’s visuals. The animations have to be the strongest aspect of the presentation, with smooth and fluid movements that give some of the more daring moves a deliciously visceral nature. Unfortunately some of the textures and the attention to detail just can’t keep up. The crowd are rendered quite poorly, to the point where they just look like they’ve been made using last generation’s hardware. Whenever you fight in any of the backstage arenas though, the excrement really starts to hit the proverbial fan. The arenas just feel dead and empty and really detract from the atmosphere that the game does a good job of creating otherwise. These problems seem even worse on the PS3 version, where the visuals just seemed jagged and lacking in definition when compared to the 360 version of the game. By comparison the sound does a better job, with some pretty solid voice acting and some nice juicy sound effects that add to the satisfying strikes and grapples. My only major criticism rests in the repetitive nature of the narrator voice clips. The narrations is usually done well and matches the on-screen action, but occasionally one clip will get repeated over and over again to the point of much irritation. 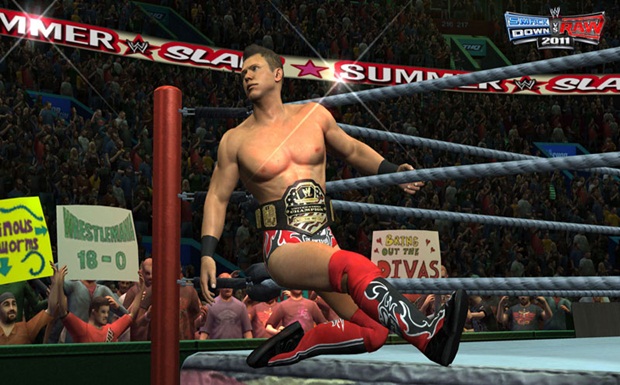 The graphics are a mixed bag with some aspects seeming quite rushed. Just try not to stare at the corwd for too long

Overall WWE is a decent sports title, but I get the feeling it will really come into its own if you’re a big fan of the franchise. Regardless of this, the lifespan of WWE 2011 will not let you down should you decide to commit to the purchase. The single player modes, though generally lacking, will last you some time and provide at least some enjoyment. The game really shines in its rock solid multiplayer gameplay and the vast creation tools that will have you making crazy new superstars, stories and special moves. With the added incentive of uploading and downloading your content online, these creation tools become almost too enjoyable and time consuming for their own good. It’s all topped off with a decent achievement/trophy list that, whilst occasionally unbalanced in its point distribution, will get you playing all the different modes and getting the most out of your game. Smackdown vs. Raw 2011 is a reasonable title overall, with a huge lifespan and multiplayer aspect let down by the poor solo play and dodgy graphics. If you love wrestling and have some like minded buddies, then consider this a worthy title. If you aren’t that way inclined, then there are one too many flaws and missed tricks to make the game worth your while.

Presentation is a little weak, road to Wrestlemania single player mode is poorly made, can become repetitive, hard to get into for those not acquainted with the franchise

Final Verdict:
GOOD
A fun brawl for all that can provide hours of entertainment with its detailed customisation and in depth multiplayer modes. However, the lack of a decent structured single player and a potentially daunting interface prevent WWE 2011 from reaching its full potential
A copy of this game was provided by Developer/Publisher/Distributor/PR Agency for review purposes. Click here to know more about our Reviews Policy.