I'm one of these uncultured (or should it be cultured) individuals who knows very little about the WWE and wrestling in general. My ten year old self was rather amused by the whole thing and a large m... Read More 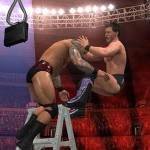 THQ have released this brand new launch trailer for WWE Smackdown vs Raw 2011. Check it out above. Also stay tuned with GamingBolt for a full review of the game soon.Read More

THQ have revealed new details for it online modes. The new online boasts of a 12 player Royal Rumble event along with 18 bots to enhance the overall the experience. THQ have also promised that unl... Read More

WWE Smackdown versus Raw to hit India this October

Indian gamers rejoice! Your favorite brawling game WWE Smackdown versus Raw 2011 will hit at retail shelve near you this October 2010. A multitude of story-driven, spontaneous cinematics will c... Read More