Well it’s time for another tough old school arcade game review.  The funny thing is I’m not being sarcastic because change original coin-op games too much and they are hated by hardcore fans, keep exactly the same, what’s the point in buying it?  Fortunately, X-Men: The Arcade Game has done a great job of balancing the two.  The game is a classic that is loved by anyone that remembers it and may be a new favorite for the younger generations.  The graphics are on par where they are not mind blowing but I don’t feel like I’m playing the first Donkey Kong.  Though graphics are one of the last things your paying attention to while having so much fun playing X-Men by yourself or with other people. 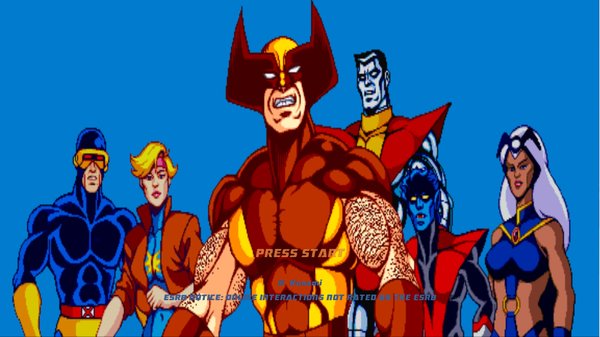 The game supports up to 6 players online to co-operatively take down classic Marvel enemies.  This is one of the best features in the game and it is even drop in/drop out with built in dialogue capabilities so your buddies have voices as you take on Magneto’s forces.  You can play local co-op or online co-op with a 6 or 4 player cabinet. (Local 4 player co-op on the X-box 360 and local 6 player on the PS3)  Choosing to play on a 4 player cabinet will give you slightly better detail in graphics while shrinking your screen to 4:3 mode where enemies can strike from off screen being that it essentially cuts the sides off so you don’t know going on in the magical blackness.  That being said you are better of sticking with the 6 player widescreen cabinet no matter how many people are playing or what kind of TV you are playing on, but it is nice to have the option there.  I won’t mention the name an old style arcade recently re-released that forced 4:3 mode upon you, greatly pissing you off at times.

You have got your classic 8 stages that you can progress through on three different difficulties being Normal, Hard and Expert.  Here is where it is nice.  Playing on expert only gives you one life but infinite continues which is basically like a dream for those people that were just out of quarters to pump in back in 1992.  So normal gives you the most live while hard gives you less then once again expert with one life and after that life you just need to press A/X to continue depending on the platform.  There is however still a countdown to continue and once the countdown is up you may still continue but will not longer have those precious points you acquired to try and climb the leader-boards that have been divided by difficulty, score, etc.  The Achievements/Trophies are easy to get for the hunters out there, just make sure you are playing with one party of the same 4 or 6 players while going for most of them, otherwise they might not trigger, while playing locally you should have no problem unlocking them.  Creating extremely difficult achievements/trophies does not add longevity to a game but rather a broken controller or worse. 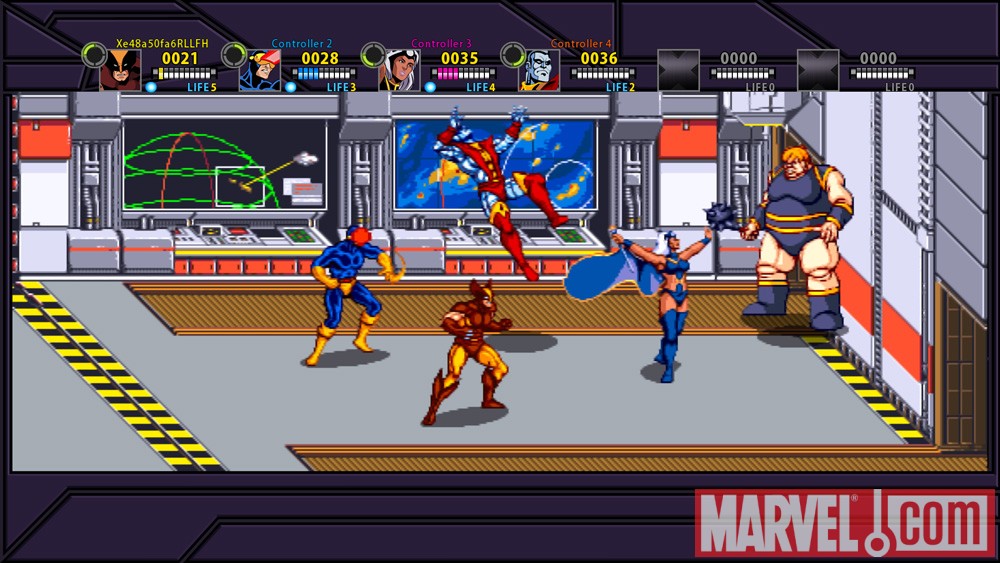 All the classic dialogue as corny as it can be is still preserved some even being re-recorded with the assumption it wasn’t so clear in the original.  You can play as Cyclops, Wolverine, Storm, Colossus, Nightcrawler and Dazzler. I remember thinking as a kid, who the fuck is Dazzler? And then remembering it’s a Jubilee type character that Marvel just keeps changing the name and look of.  Each character has their standard one two punch and their unique super power that they can use but have a limit of. Of course the last is the jump button and you can attack from above by hitting the attack button in mid air.  You can even kick enemies when they are down.  As you go through levels, you’ll fight mini-sentinels along with other odd creatures and robots.  The bosses you will come across are Pyro, Blob, Emma Frost, Mystique and of course Magneto among others as you encounter other Marvel characters.

Konami and Backbone Entertainment have done a great job with this re-release to consoles.  They even added the option of playing the US version or the Japanese version which is probably one my favorite aspects of the game never getting to play the Japanese version before.  The Japanese version in nearly identical except you have more mutant power at your disposal while enemies might me slightly harder Power Rewards are dropped that can give you either more mutant power or more lives.. they look like giant pills.  Of course the text is in Japanese as well but other than that, they are pretty much the same.  The only bad thing I can say about the game is that you lose health every time you use your mutant power, which doesn’t really make sense and it is $10 or 800 Microsoft Points.  With such a great job with a re-release, we are not all made of money Konami.  I’m not saying it’s outrageous but the game can be beaten in 30 minutes and all though the replay value is nearly endless when it comes to the online co-op fun you will have with friends and random people, 5 US dollars would be a perfect price as well as increase sales.  In retrospective though this review probably would have only cost me 30 dollars in quarters in the wonderful 90’s but between the classic repetitive music or the amount of Wolverines arm hair almost making that a super power in itself, Konami has sucked me into the fun once again.  Keep up the good work and the price down.. next stop, The Simpsons.

Konami keeps the classic arcade intact while even adding the Japanese version to it. 6 player online and offline co-op is a blast.

The price of $10 arcade games is getting old. You lose health when you use your mutant power. No new characters.

Final Verdict:
GOOD
Konami brings the classic X-Men arcade game back to next gen consoles reminding us of just how fun they were, with the co-op play and memorable mutants.
A copy of this game was provided by Developer/Publisher/Distributor/PR Agency for review purposes. Click here to know more about our Reviews Policy.