Xbox 360 is a console to be reckoned with and the Xbox brand is now almost as influential as the PlayStation one, and here are the figures to supplement that.

“Since 2005—when we launched Xbox 360—we have sold 67 million consoles and have generated more than $56 billion at retail, and we’re still going strong in our seventh year,” wrote Yusuf Mehdi, Chief Marketing Officer, Interactive Entertainment Division, Microsoft on the company’s official blog.

“With 47 percent share of the current-generation console market, we are hitting our stride largely as a result of the success of Kinect for Xbox 360 (19 million sold ) and the flood of new entertainment options through Xbox LIVE (40 million members).”

He also revealed what’s in store for Xbox 360 at E3: “You’ll see the first of that next week at E3 where we will showcase the very best of Xbox. We’ll unveil new games, show new ways to enjoy the entertainment you love and, as always, we’ll have a few surprises to share!” 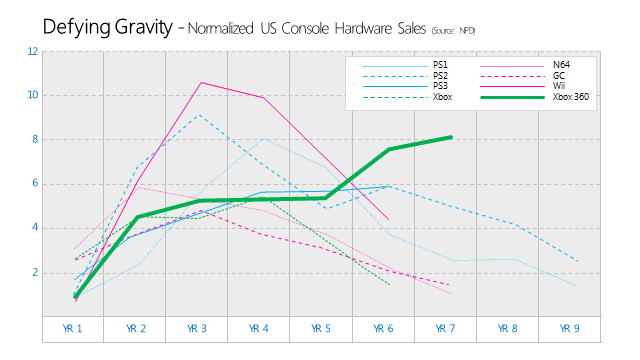 It will be interesting to see what Microsoft is planning with Xbox 360’s successor. Tell us what you think in the comments section below.

Travis Touchdown is going to go up against some pretty weird foes in his next outing, and this new trailer bri...

"We didn’t just work on those as a generic hardware upgrade," says Ghost of Tsushima creative and art direct...