Xbox One App “True Achievements” App Is On Its Way

“I swear, it’s not cheating”. Yeah, yeah. Keep telling yourself that. 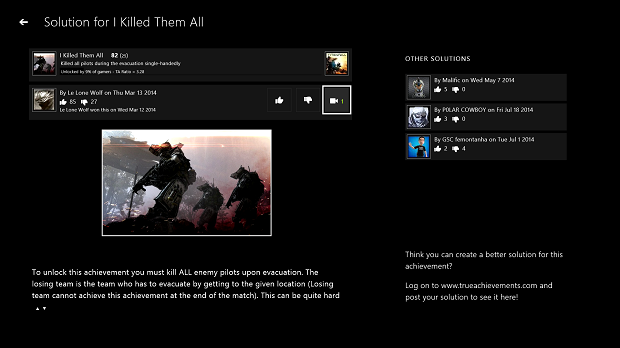 Here’s one for the cheaters, that don’t like to be called cheaters. Yes I’m looking at you, yes you, Mr strategy guide user.

There’s a new App in bound for the Xbox One and it’s going to maker you ‘chievo popping life much easier and a great deal less frustrating. The TrueAchievements App will help you track and pop those achievements that stubbornly remain locked. It even has a rather impressive list of features:

Achievement Guides –  The TrueAchievements’ App will cover over 90% of the acheivments that you’re likely to find in your Xbox games, this will be aided by community generated advice on how to get the unlock. This includes video and image content.

Gaming sessions – TrueAchievements’ allows players to arrange and track your upcoming multiplayer sessions, this will most definitly helpy with getting some of the more bothersome multiplayer achievements that are become more and more common.

True Scoring System – Ever get one achievement that was as simple as a triple bypass surgery only to get rewarded with 50 points? No more! TrueAchievements’ will reward you more points for harder to earn achievements. How kind.

News – TrueAchievements’ will also keep you up to date on all the most recent Xbox News, be it Xbox One, 360, news features or editorials. You can find it all in the App.

Isn’t that a nice little package? Well keep an eye out, because it’s set to hit the X1 soon!

Tagged With: achievements, Microsoft, Xbox One