Microsoft has started up the pilot for their new rewards system for Xbox Live users.  Around 60,000 people have been invited to join this new pilot which will run for 6 months and net you some Microsoft Points and discounts.  This is just a pilot so we don’t know if it will definitely be implemented to the public after the 6 months or not. 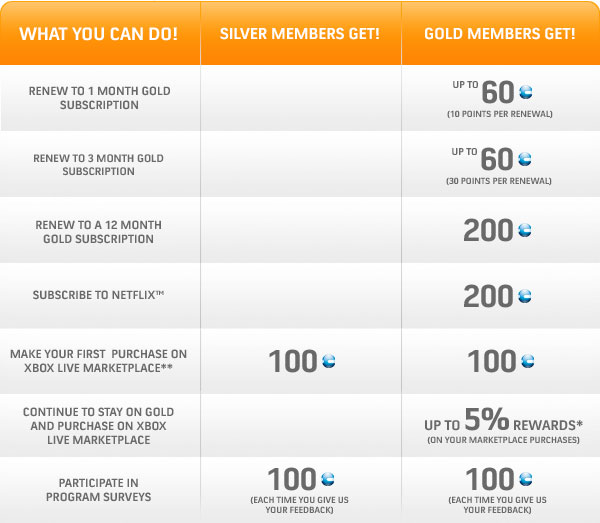 If you were chosen to participate in the program you would know from an e-mail stating this:

“For the next six months, the Rewards Squad will hook you up with Microsoft Points just for doing the stuff Xbox LIVE members do all the time. You’ll score points not only for renewing your Gold subscriptions; you’ll get a reward on what you spend on the Xbox LIVE Marketplace. The best part is, the more you spend, the more you get, and for each month you stay on Gold, the higher your monthly reward up to 5% of your Marketplace spend.”

“Also, every month, The Rewards Squad will send you an email with an update on the points you’ve earned and the cool stuff you can get,” the site says. “This promotion lasts for six months and you can start spending the points you’ve accumulated after the first three months.”

These points you get as rewards do actually expire.  Here is the site that the e-mail brings you to.