Yoshi games are widely accepted as being the easier, more relaxing cousin to the mainline Mario series. It’s true, of course, but it also makes it easy to overlook the deceptively simple design that each game offers with its own unique ways to create a sense of wonder and exploration. While basic combat encounters and rudimentary platforming make the games accessible for all audiences, it’s the divergent creativity of each entry that gives way to discovering everything it has to offer. 2015’s Yoshi’s Wooly World took this concept even further as it saw players interacting with strings of yarn in its fabric world, lending itself to inventive new ways to traverse levels and discover hidden areas and secrets. It set a new bar for the franchise, so Nintendo likely understood that a return to basics wouldn’t scratch the itch quite the same way.

I’m happy to report that Yoshi’s Crafted World has opted to continue down the path of having a new, distinctive aesthetic while remaining unquestionably Yoshi. Crafted World sheds the yarn and replaces its visuals with a world designed almost exclusively out of household items. The game never stops proving that it is dedicated to its sense of consistency and attention to detail. Structures and background items are often made from material like cardboard or paper, and if you look hard enough, you’re bound to recognize things like soda cans, glass bottles, cookie boxes, and toilet paper rolls. Strangely enough, I enjoyed trying to find and identify all of these individual items throughout the game almost as much as making my way through the levels. 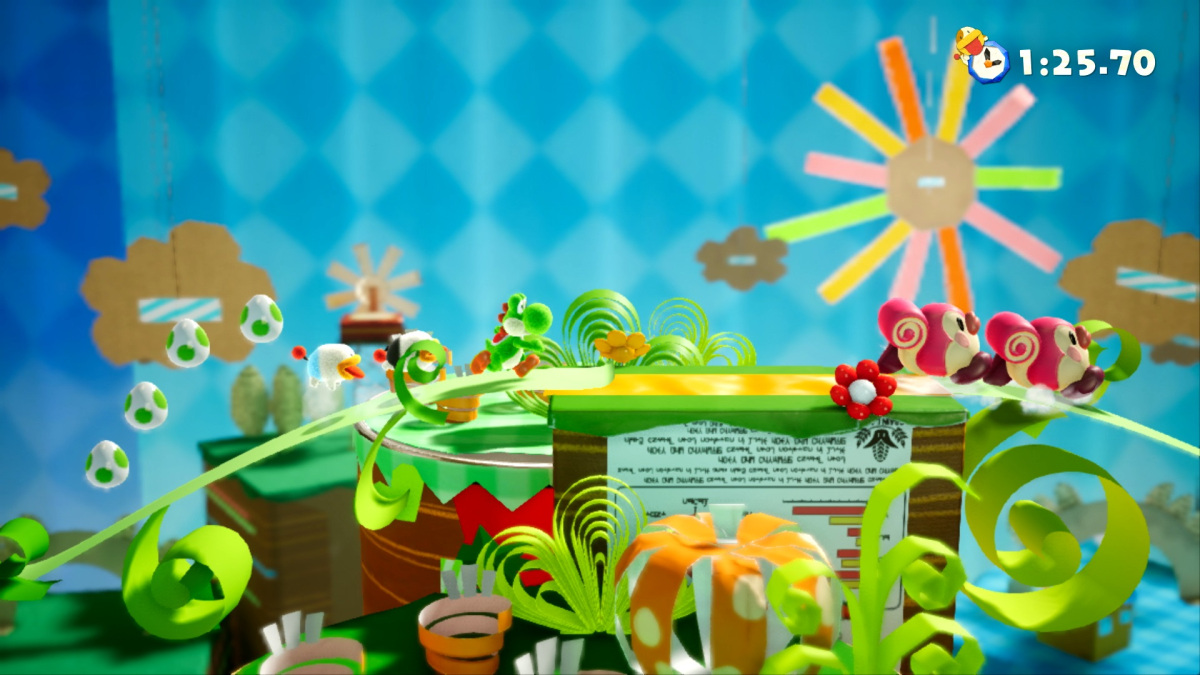 "Yoshi’s Crafted World has opted to continue down the path of having a new, distinctive aesthetic while remaining unquestionably Yoshi."

The rest of the game is a mixture between traditional Yoshi gameplay and brand-new mechanics that expand the game in interesting ways. You still eat enemies and turn them into eggs, shoot those eggs at things to collect them or knock them down, and use Yoshi’s adorable kick-float jumping to make platforming as easy as ever. However, quality of life improvements make this entry in the franchise feel like a meaningful evolution. You no longer have to press down to swallow enemies Yoshi grabs with his tongue, and you now have full control over where you aim eggs. These sound minor, but the reduction in busywork truly makes a difference in the moment-to-moment gameplay.

Quality of life updates are one thing, but it’s what Crafted World does differently that makes it such an enrapturing experience. It opts for a mostly two-dimensional structure, but many elements of the game implore players to engage with it in three dimensions. Buildings or items in the background can often be fired at and knocked down with eggs to reveal flowers or coins, Crafted World’s primary collectibles. Additionally, upon completion of a level, NPCs will always request you return to the level to track down random background items for them like paper airplanes, cardboard sheep, or lobsters made from buckets.

Revisiting the levels after completion allows you to return to the base level or opt to track down three puppies by tackling the level from a new perspective known as “the flip side”. This new level perspective essentially just flips the level so that you explore the back side of the original, meaning much of what you’ve already seen remains intact, but there may be new paths available behind items or walls you couldn’t see from the front. The initial revisit is often exciting, but Crafted World asks you to replay the same levels for these collectibles and puppy hunts upwards of 3-4 times, eventually leading to fatigue and boredom. Thankfully, this content is mostly optional, so I rarely felt like I had to partake in anything I didn’t want to. 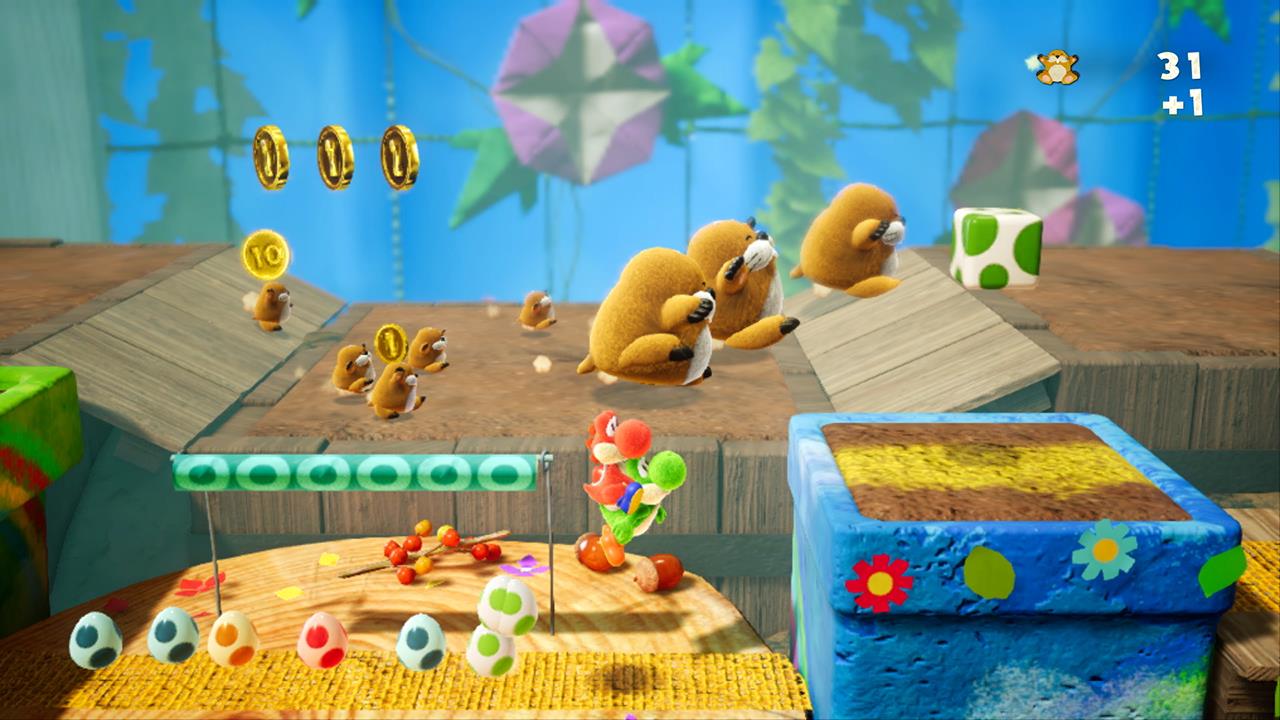 "Quality of life updates are one thing, but it’s what Crafted World does differently that makes it such an enrapturing experience. It opts for a mostly two-dimensional structure, but many elements of the game implore players to engage with it in three dimensions."

These design decisions make Yoshi an ideal co-op game, however. I spent a solid 90% of my time with the game playing alongside my wife, and as the old saying goes: “Two heads are better than one.” Finding secrets is easier with two sets of eyes, and using one another to reach higher areas is a cinch. You can even hilariously eat one another to create an egg version of that player and then shoot it like a normal egg, which is obviously cute, but it also came in handy more often than one might think when we ran low on normal eggs. As fun as it is, however, it can be downright infuriating when trying to frantically navigate perils together and one Yoshi attaches to the other’s back. I would’ve preferred a dedicated button to activate piggybacking, but it’s a small price to pay, because co-op is still the best way to play the game, and the low difficulty only enforces it further for families with casual gamers or children.

That said, the general lack of difficulty could be a turn-off to some gamers looking for something to test their platforming skills. Crafted World is no doubt a game designed for casual exploration and bringing smiles to faces – there’s only a handful of difficult moments to be had during the campaign. But that doesn’t mean it’s without challenge at all. The best part of Crafted World simply comes from exploration and tracking down its bevy of collectibles. And while I’d never call the game “hard”, not all of these paths and items are a breeze to find. Some levels required me to replay them multiple times over to finally realize what I’d missed.

It was never frustrating, but it offered enough of a mental challenge to keep me invested when the difficulty of the core gameplay didn’t. You can make the game even easier via the inclusion of optional costumes that offer extra damage protection. Sadly, despite their usefulness, it never felt as exciting to unlock a bulky or awkwardly-shaped costume as it did to unlock Wooly World’s adorable yarn designs. 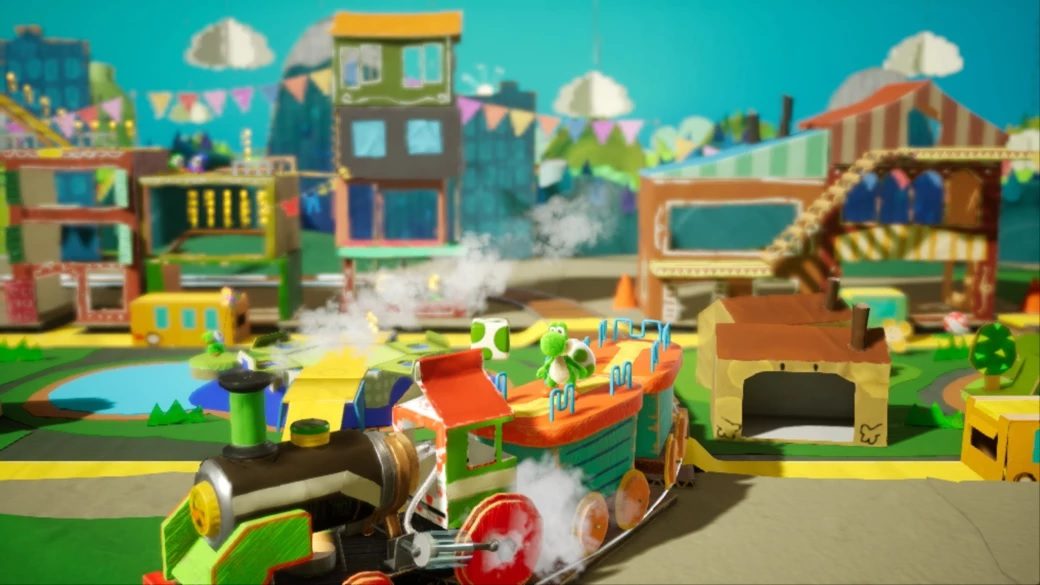 "The best part of Crafted World simply comes from exploration and tracking down its bevy of collectibles."

Rounding out the package is Crafted World’s weakest link – its sound design. A lot of the soundtrack is just remixes of the exact same tune over and over using different obnoxious toy-esque instruments, and the few that aren’t never stand out as anything beyond grating noise. Yoshi games have never been easy on the ears, but something about the clinks and clanks of Crafted World really tested my nerves after a few hours in ways even the worst of previous games never could.

Nevertheless, all of the game’s enthralling mechanics come together in such a way that I never got too bored of searching for flowers or coins in any of its core levels, and the slow pace of Yoshi games makes for a relaxing time doing so. Few levels required me to feel rushed or in extreme danger, so I was able to explore, shoot eggs, and kick my little Yoshi legs to float all over the levels to my heart’s content. This is what makes a Yoshi game a Yoshi game, and I wouldn’t have it any other way.

Final Verdict:
GREAT
Yoshi’s Crafted World brings together everything that makes the series so amazing to begin with, and expands on it exponentially with new mechanics and design decisions. It’s not perfect, but it’s a magical adventure in creativity from beginning to end and a textbook example of Nintendo’s dedication to pure fun.
A copy of this game was provided by Developer/Publisher/Distributor/PR Agency for review purposes. Click here to know more about our Reviews Policy.