Everything you need to know about Yoshi's New Island. 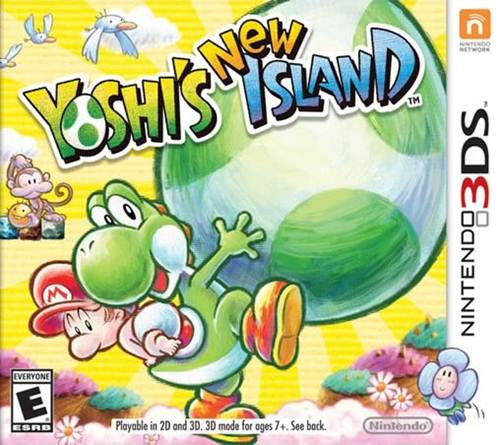 Yoshi’s New Island is an upcoming adventure platformer that is currently in development by Arzest Corporation (Wii Play: Motion, StreetPass Mii Plaza) to be released exclusively for the Nintendo 3DS whilst also being published by Nintendo.

Yoshi’s New Island is the 3rd entry into the Yoshi video game chronology, serving as a sequel to Super Mario World 2: Yoshi’s Island (Super Nintendo Entertainment System) and Yoshi’s Island DS (Nintendo DS). Yoshi’s New Island is being produced by Nintendo legend, Takashi Tezuka who (having worked on both the previous Yoshi video games) has worked on Super Mario Bros. one to three as director, and numerous The Legend of Zelda titles as both director and supervisor. The game is scheduled for release in North America and Europe on March 14th 2014, and March 15th 2014 in Australia.

Yoshi’s New Island was first announced in April of 2013 via a Nintendo Direct webcast. Despite being announced during the webcast, the game went without a name until E3 2013. When Nintendo took to the stage they announced that the game would be titled Yoshi’s New Island, this announcement was accompanied by a trailer.  The game’s signature art will remain thoroughly intact, the oil painting style and cartoonish crayon characteristics were so iconic that any change to the imagery would have been too jarring. 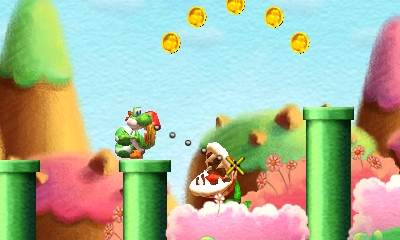 The gameplay for Yoshi’s New Island will remain largely unchanged from the previously established formula, including the old but effective mechanics as well as introducing some new features as well. The core gameplay will once again centre around the 2D platforming aspect of the game which will see the player transporting various baby characters from within the established Mario universe (see character list) through a variety of stages.

Yoshi will make use of the ground pound attack, his flutter jump, extending tongue to eat and transform enemies into eggs as well as the ability to hurl eggs. One of the new gameplay mechanics is the inclusion of ginormous eggs that are formed after Yoshi ingests a larger than normal enemy. These huge eggs have the same effect on the game world as when a player would eat a Mega Mushroom from previous Mario titles, meaning they can inflict massive damage on the area around them.

Yoshi also have the ability to transform their body into various shapes at certain times, including the Yoshi Helicopter, Yoshi Jackhammer, Yoshi Submarine and the Minecart Yoshi. Throwing accumulated eggs is a returning feature, making precision throws will reward the player with health pick ups and puzzle solving opportunities.

After the conclusion of Super Mario World 2: Yoshi’s Island, the couple who received Baby Luigi and Baby Mario claim that the children are not theirs. The Stork begins looking for the parents of the babies but once again encounters the powerful Magikoopa, Kamek. With Luigi being captured and Mario falling onto the nearby Egg Island, he is found by a group of kind Yoshi’s who endeavour to take Baby Mario to find his brother and defeat Baby Bowser who has his own plans for Egg Island.