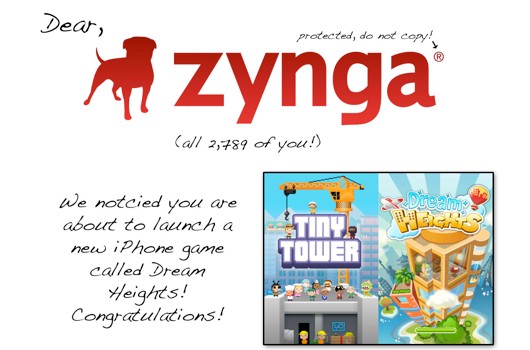 A little while back Nimblebit, the developers of Tiny Tower, released a sarcastic ‘good luck’ message to Zynga, noting the similarity between their game and Zynga’s recent Dream Heights. Well, in a recent interview, Zynga CEO Mark Pincus responded: “We don’t need to be first to market. We need to be the best to market.” He went on to address Nimblebit directly: “You should be careful not to throw stones when you live in glass towers… when you pull the lens back, you saw that their tower game looked similar to five other tower games going all the way back to SimTower in the early 1990s.”

In the interview, and a company email provided on the source page, Pincus goes on to discuss how  “Google didn’t create the first search engine” and also purports that Buffalo Studios, who accused Zynga of plagiarising thier Bingo Blitz, actually copied ideas from Zynga’s Poker Blitz.

Nimblebit have responded: “It is a smart idea for Mark Pincus and Zynga to try and lump all games with the name Tower together as an actual genre whose games borrow from each other. Unfortunately sharing a name or setting does not a genre make… If you take a quick look before ‘pulling the lens back’ as Pincus suggests, you’ll find an innumerable number of details in the game that were painstakingly crafted to be identical to Tiny Tower.”

Bingo Blitz vice president Salim Mitha added that Pincus “does nothing to dispel the notion that Zynga has turned plagiarism (of successful games) into a scalable business model for his company.”