10 Reasons to be Excited About Far Cry 6

After nearly five hours with Far Cry 6, we can't wait to dive into the full game.

Far Cry’s brand of open world gameplay mixed with focused storytelling and emergent action has turned the series into one of Ubisoft’s biggest properties over the years, and with Far Cry 6, Ubisoft seems to be ramping things up in more ways than one. After nearly five hours with the game, we can confidently say that we’re excited about how it’s shaping up. Here, we’re going to talk about our biggest takeaways from the opening few hours of Far Cry 6. 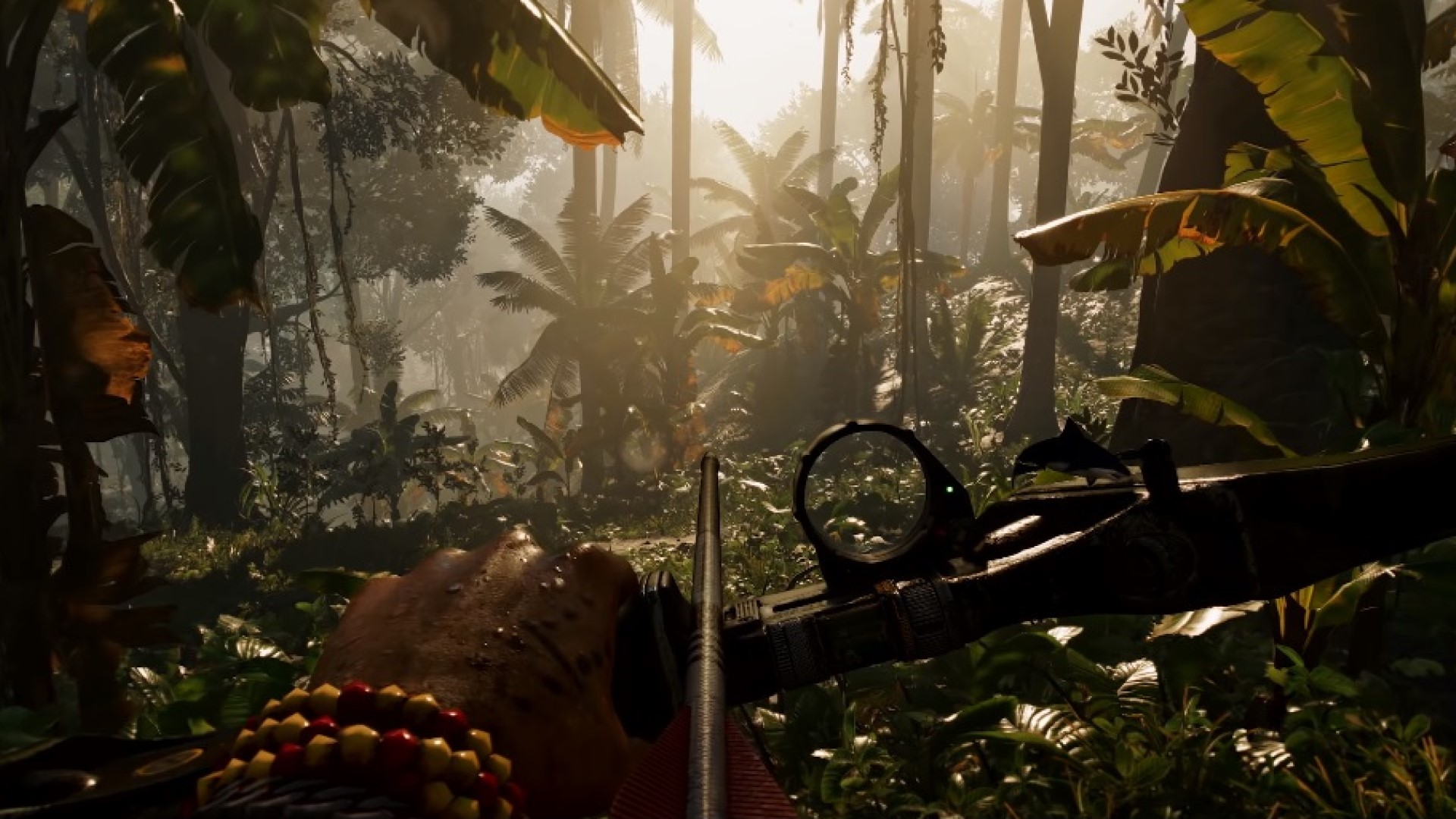 The open world settings are always a crucial part of Far Cry games, because exploring those worlds and engaging with all the optional content is a core part of the series’ loop. Far Cry 6’s Yara, thankfully, might just turn out to be one of the series’ best efforts to date. It’s a dense, lush location full of forests and natural beauty, which, of course, is something you expect to see in every Far Cry game’s setting. But Yara also feels unique from what the series has done in the past, because it’s also got quite a lot of pockets of civilization scattered throughout. Exploring actual towns and urban locations (or semi-urban, at least) in a Far Cry game is definitely a pretty fresh feeling. Of course, there’s still so much of the map that we’ve yet to see, but based on what we’ve seen so far, it’s doing a good job of capturing various facets of the island nation while still feeling quite organic.

Of course, that means that Yara also has plenty of room for exploration. The natural beauty of the map’s more lush and overgrown environments is plenty of motivation to keep exploring in and of itself, but there’s quite a lot else going on as well. A lot of it is stuff you’d expect, but some side activities also dive deep into the history of Yara itself in some really interesting ways as you hunt for relics scattered throughout the map. These can take you to caves, involve sections that focus on light platforming or on puzzles, require you to read maps, and the like. If Far Cry 6 can consistently deliver similarly engaging activities that don’t go about things in a generic way throughout the entirety of its experience, that full open world will be an absolute treat to explore. 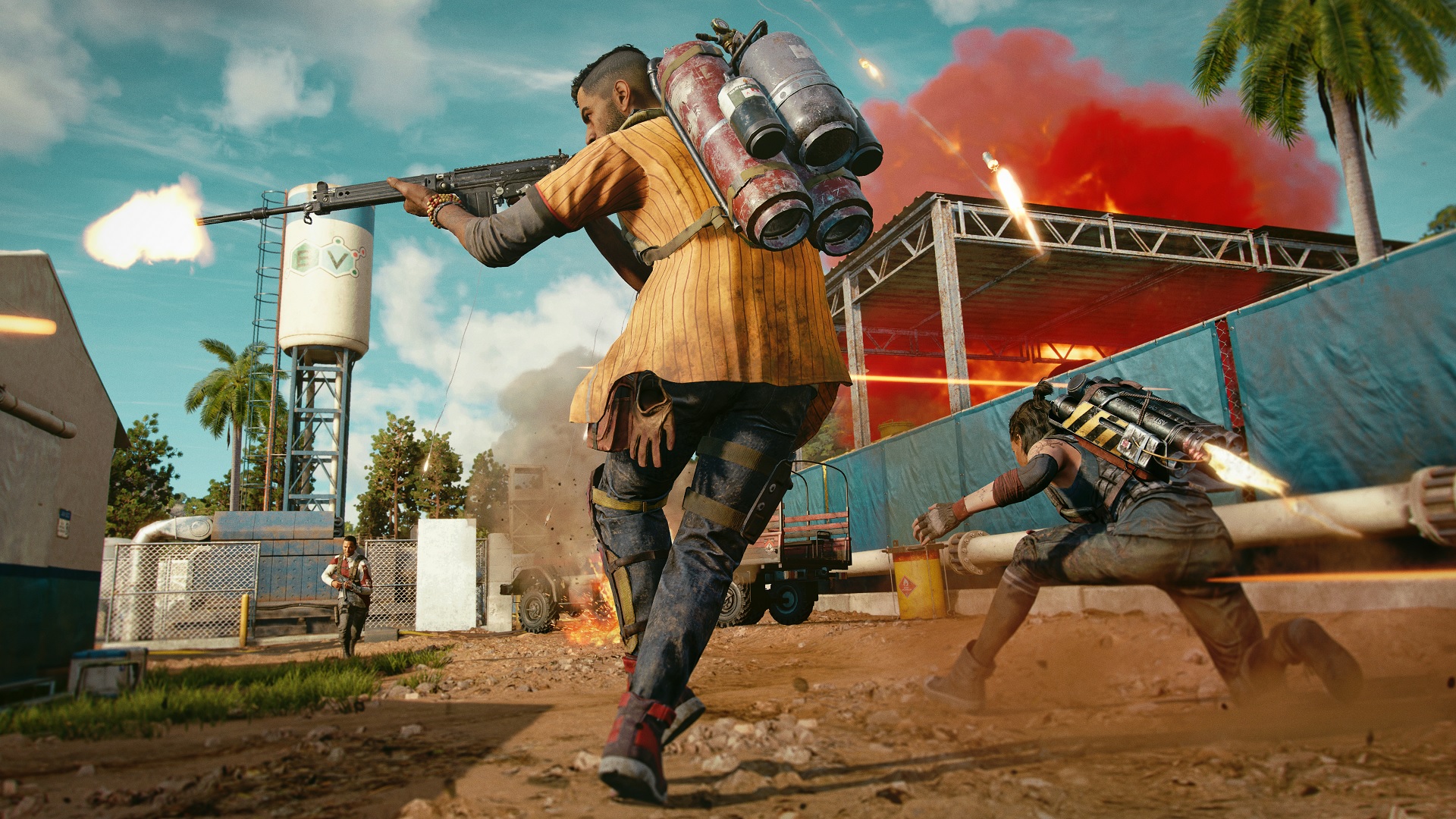 Of course, Far Cry 6’s open world is also packed with the kind of side content you’d expect from the series- which is great, especially if you’ve enjoyed previous Far Cry games. There’s plenty of characters who hide out side quests, NPCs who tell you about points of interest on the map, enemy instalments and outposts to clear and take over, checkpoints to clear, and more. Your primary goal in Far Cry 6, after all, is to topple the ruling regime, and while a lot of that is done in ways that are pretty unique for a Far Cry game (more on this in a bit), plenty of the series’ tried-and-true open world activities fit in pretty nicely in that framework as well. 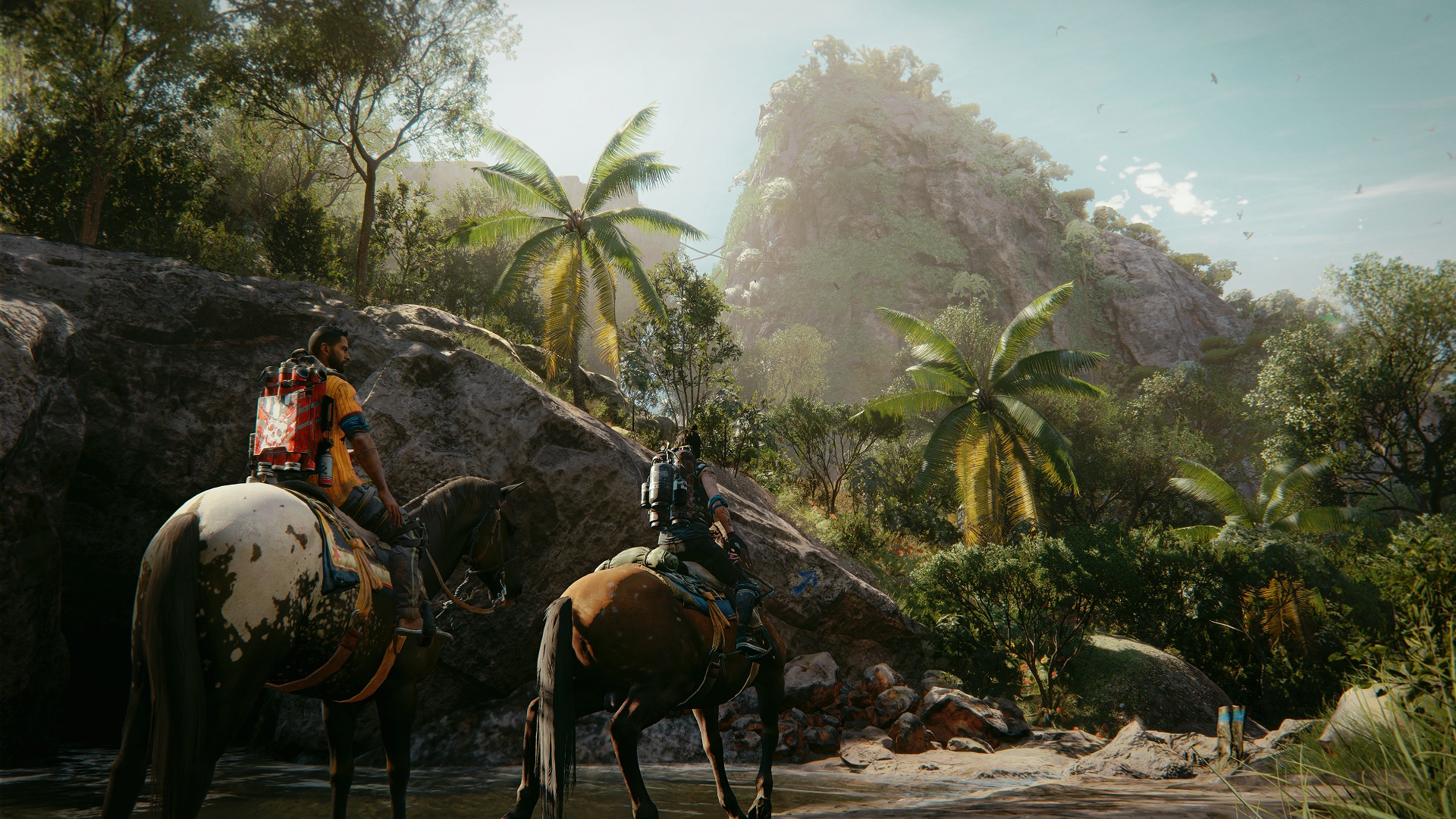 The actual traversal is something Far Cry games typically excel at, and Far Cry 6 is looking set to keep that going. There’s quite a lot of vehicles that you can drive around Yara (and can also summon them to you once you’re a couple of hours into the game), while both the parachute and the grappling hook are available very early on as well. Far Cry 6 will, of course, also have the wingsuit, and you can also ride horses around the entire map. Open world traversal is one area where the game is making very incremental changes- but it works quite well as it is, so that’s far from a bad thing. 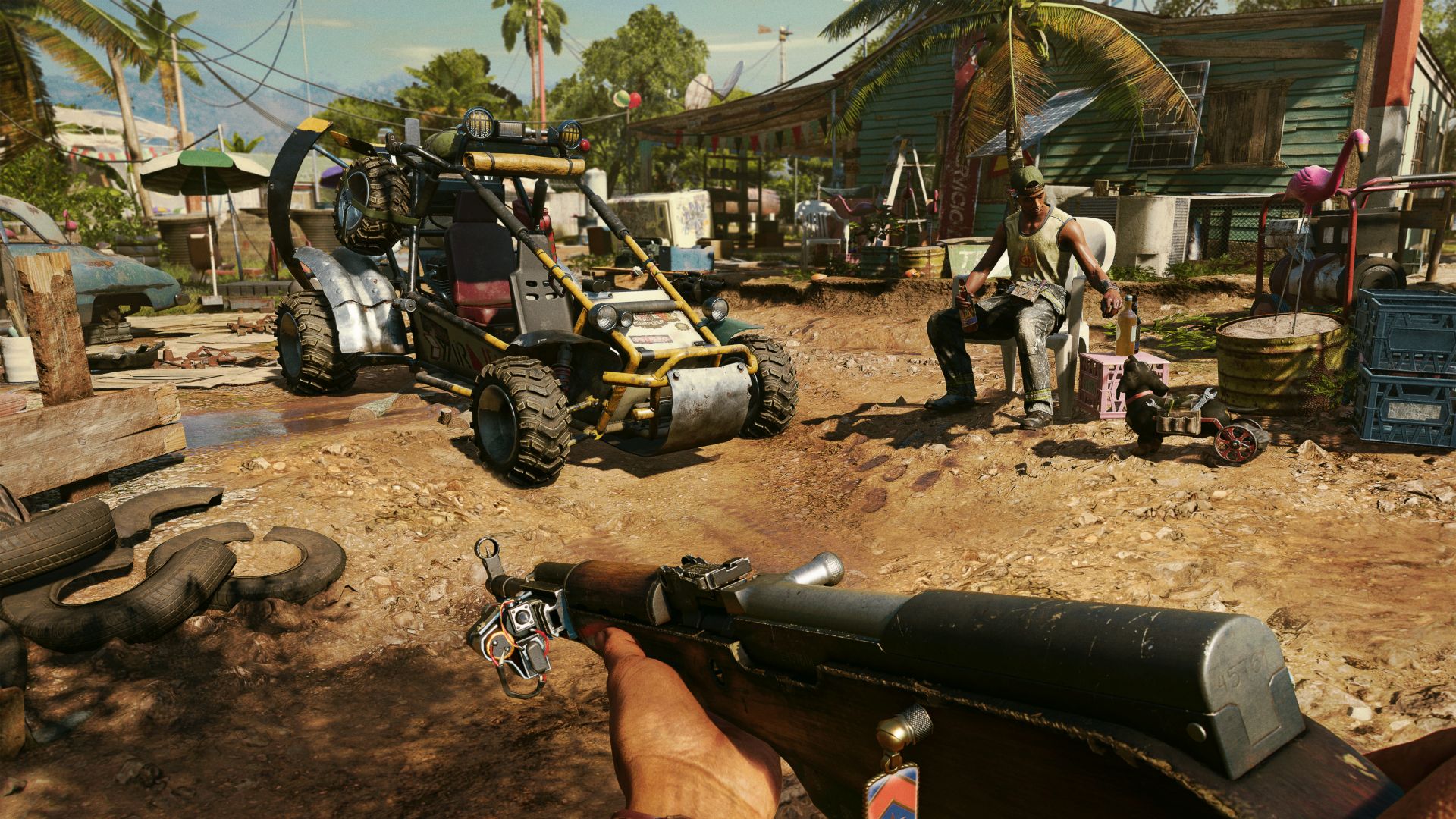 This is the one motif that informs so much of what Far Cry 6 is. The fact that you’re a guerrilla soldier trying to topple an entire regime is something that casts a constant shadow on not only the story, but also the gameplay. Of course, the Far Cry series’ general focus on stealth as a viable option is something that fits in with that very nicely, but other additions and tweaks to the formula also leverage that part of the game. When you walk through populated areas with a lot of Castillo’s soldiers, you have to keep your weapon holstered and still make sure you don’t get too close to them. Travelling through the open world, you might come across a lot of checkpoints, where one wrong move can bring down a bunch of enemies on you. To avoid that, in fact, you’re encouraged to use secret guerrilla paths that Castillo’s soldiers don’t know about- use the guerrilla fighters’ greater knowledge of hidden and unknown pathways to your knowledge as you navigate the world. Meanwhile, another big system where the whole guerrilla motif has a huge impact is the customization- which brings us to our next point… 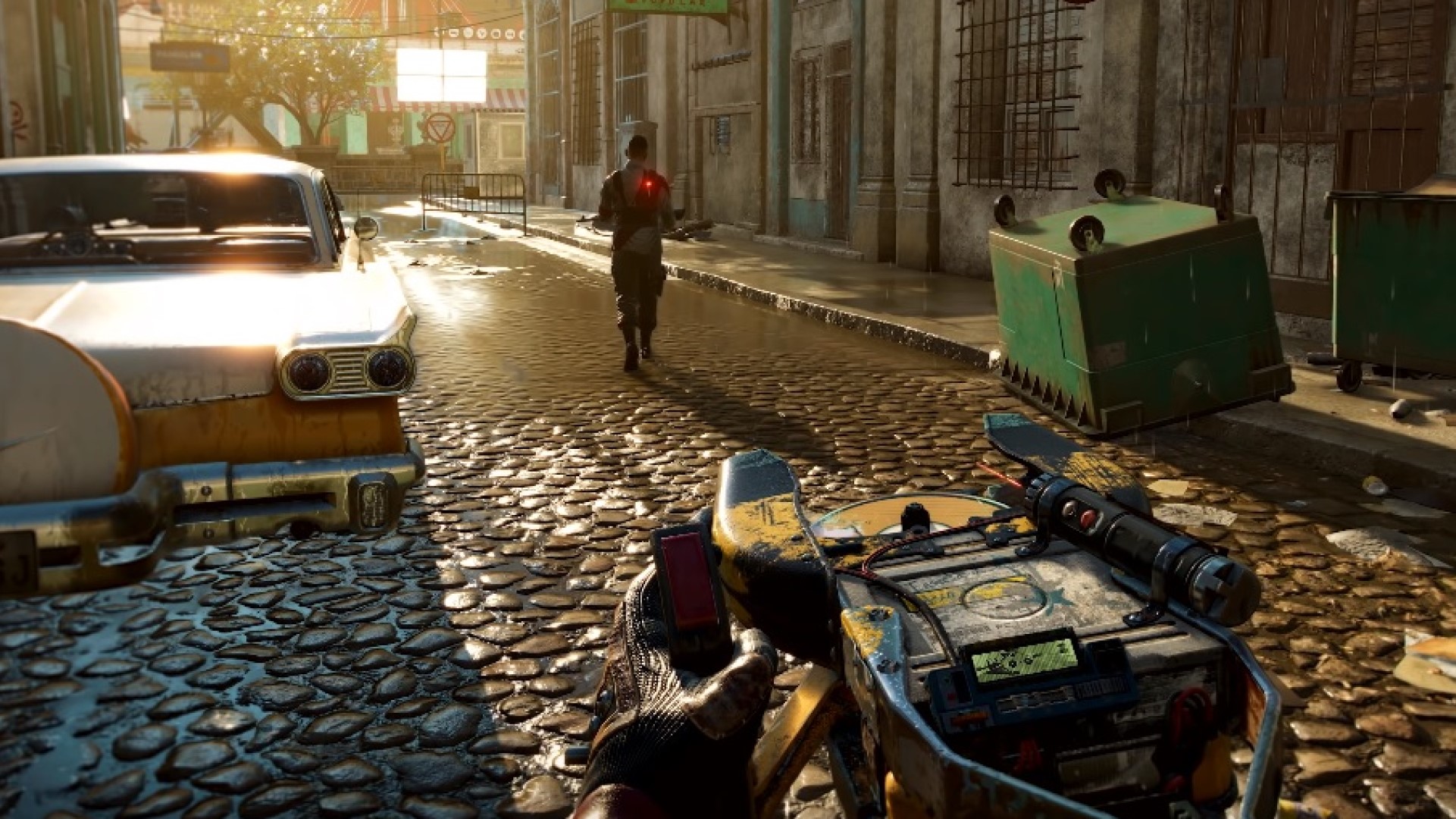 In its opening hours, Far Cry 6 hammers home the fact that using whatever scraps and materials you find and then turning them into deadly weapons and tools is your bread and butter as a guerrilla fighter. This game calls that Resolver, and it’s looking like Resolver is going to have a pretty big impact on how the game plays. You’ll find parts and resources throughout Yara, by either exploring or combing environments or hunting wildlife, and these, in turn can be used to craft different kinds of bullets, weapon mods, silencers, new weapons, and more. Supremo backpacks are also an interesting new wrinkle and can have a variety of different uses, such as firing a barrage of rockets or stunning enemies with an EMP blast. You can also repair broken down vehicles, or even customize Resolver vehicles with their own customizations. 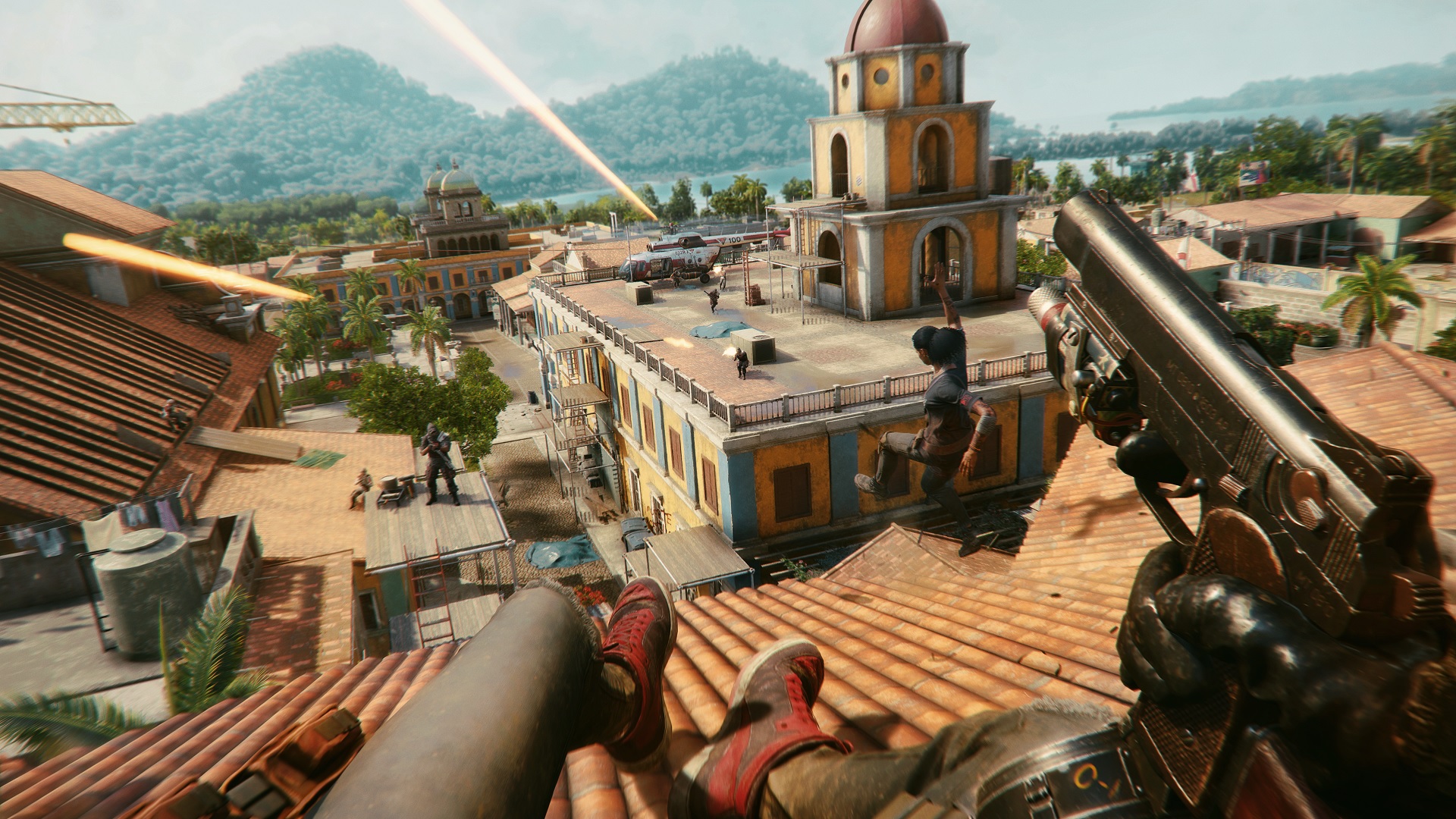 Far Cry 6 has a gear system, but it’s not like the one that Ubisoft introduced in New Dawn (thankfully). Rather than being tiered, different gear pieces now come with different perks, such as improving your defense against armour piercing rounds, or improving your movement speed right after you come out of a slide, or increasing your movement speed while your weapon is holstered. At least in everything that we’ve seen so far, there also isn’t a barrage of new gear being dropped on you constantly- so it’s not a loot game in the way so many games (especially Ubisoft games) tend to be these days. With meaningful perks that can be applied in different ways and proper choice between gear and weapons, especially with all the customization mechanics, Far Cry 6 could have a solid, engaging progression system, and it definitely seems to have all the elements in place for that. 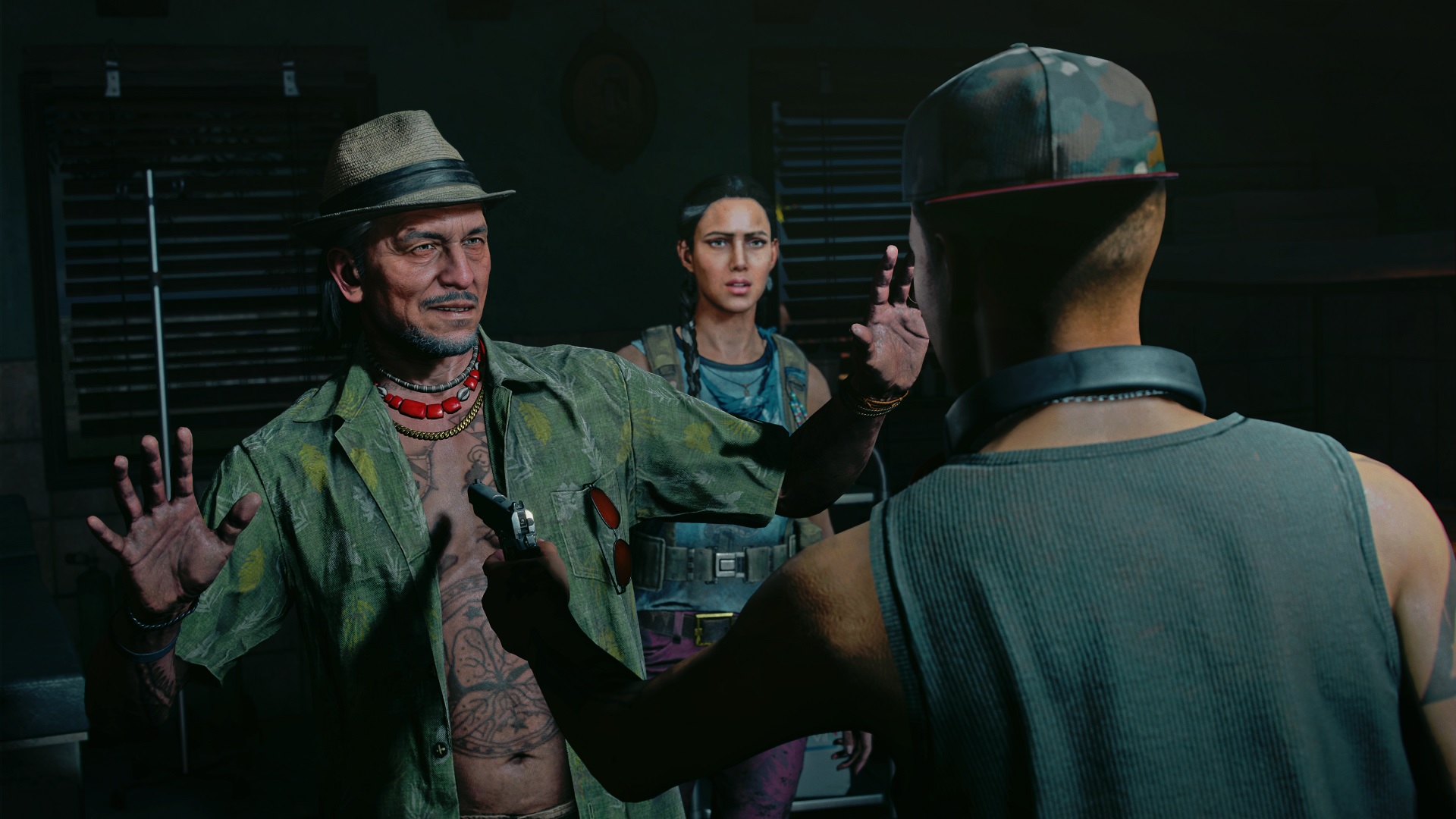 Generally (though not always), Far Cry games put quite a bit of emphasis on storytelling, and though the series’ recent entries de-emphasized that quite a bit, Far Cry 6 seems to be closer to 3 and 4 in that respect. In fact, storytelling in general seems to have improved in some noticeable ways. The most noticeable is third person cutscenes, which is a series first. With Far Cry 6 not slavishly sticking to the first person view during cutscenes, the game is crating more directed, more dynamic cutscenes that sell the story much better. The main characters that Dani meets in the opening hours of the game have all had very clearly defined and unique personalities as well. All of that, combined with Giancarlo Esposito’s ability to dominate any scene he’s in, and with Yara itself being an inherently fascinating setting, means that all the elements are in place here for a really good story. 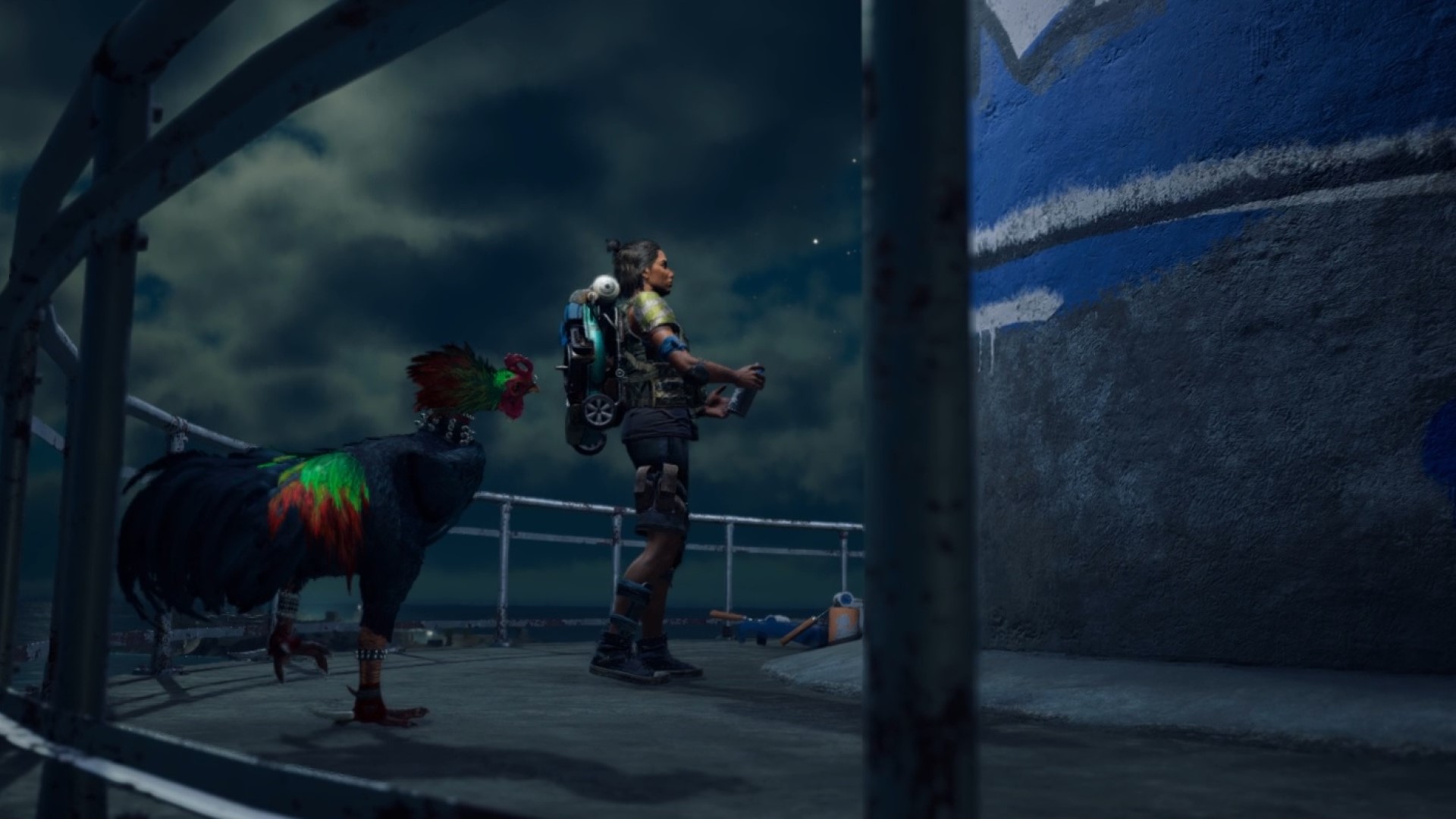 Though it isn’t called the Fangs for Hire system in Far Cry 6, you’ll still get the chance to fight alongside quite a few animal pals throughout the game. In fact, you’ll be doing more than just fighting with them, with many of them having pretty interesting uses. The first Amigo you get in Far Cry 6 is Guapo the crocodile, who’s a great companion to have with you in any combat scenario. There’s also Chicharrón, a crazed killing machine of a rooster. Other Amigos will have present different advantages, like the wiener dog Chorizo, who is best used as a distraction during stealth, or Danilo the pelican, who will lead you to treasures scattered throughout Yara. 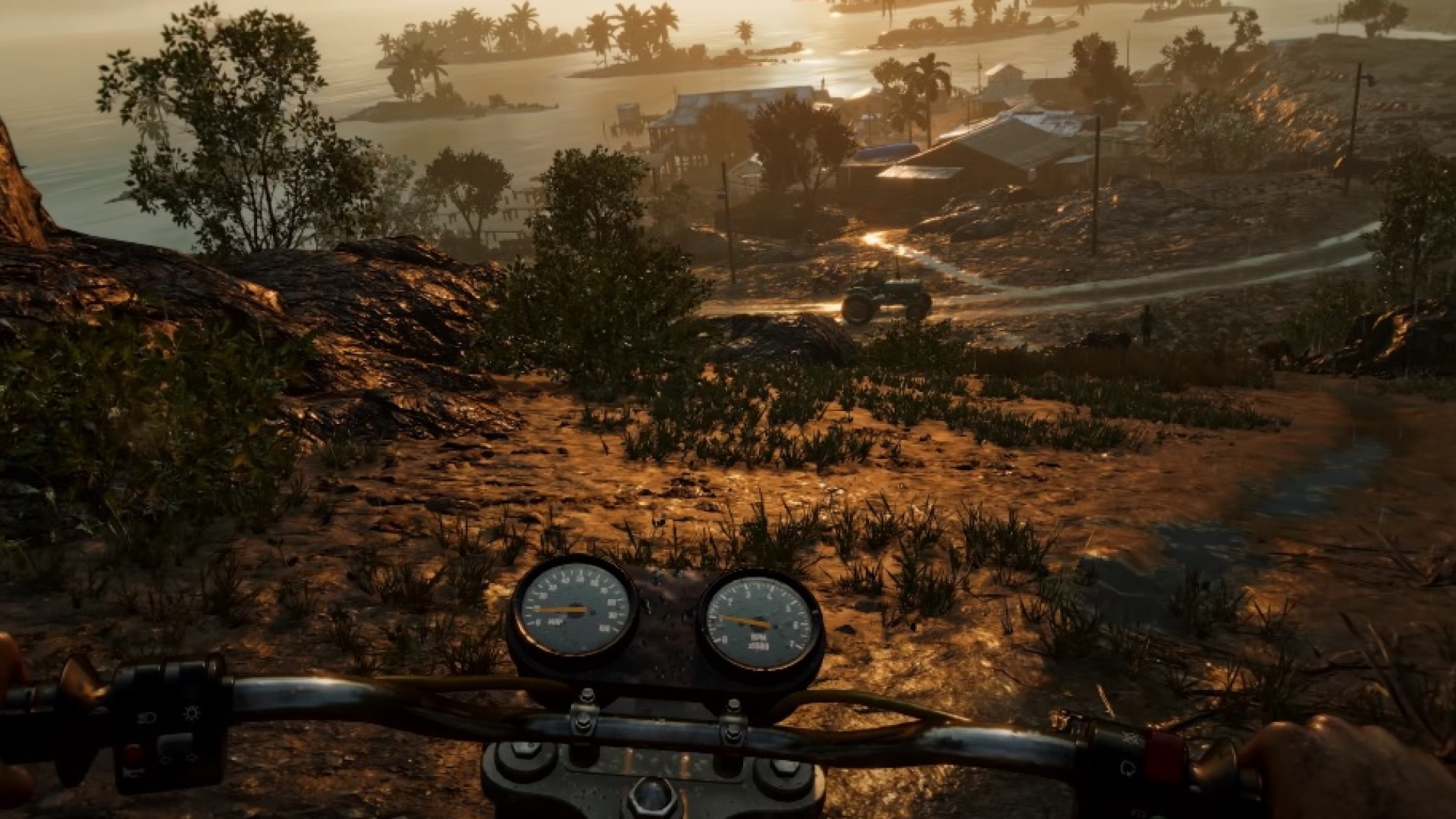 This is a much more brief point as compared to everything that we’ve talked about so far, but visually speaking, Far Cry 6 has really impressed up. It hasn’t surprised us, because you do expect a Far Cry game to look great, but it’s hard not to be impressed with the way this game is bringing its lush and dense setting to life. The lighting and environments are gorgeous, and some of the more explosive moments during combat look great as well. Character models tend to show some flaws when viewed up close, but in cutscenes, those generally look great as well.