Attempting to be unique and actually managing to confidently pull it off are often very, very different things, and few gaming franchises have managed to do it as well and as consistently as Metal Gear. That uniqueness, of course, often comes in the form of flat-out weirdness, which is only heightened by how Metal Gear Solid games almost always try to explain even their most ridiculously out-there concepts and ideas with their own twisted brand of logic. That’s something that is reflected in pretty much everything to do with the series, which also includes the enemies that we’ve faced off against throughout the course of the series, and here, we’re going to talk about the five weirdest foes we’ve ever crossed paths with in Metal Gear games. 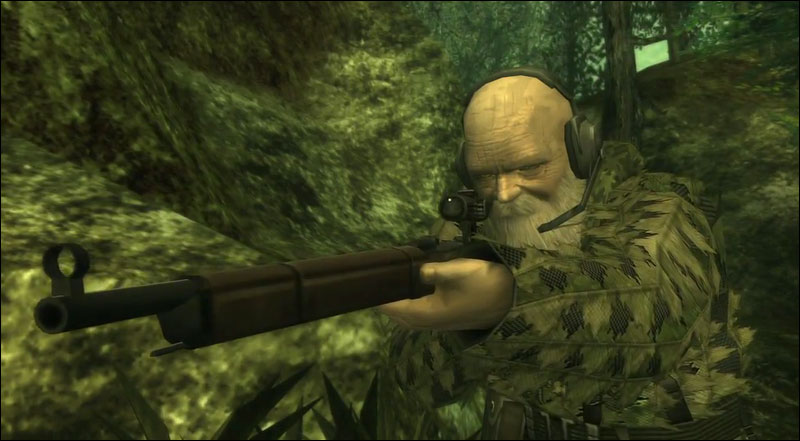 The End is, in so many ways, the perfect exemplification of the layers of ridiculousness that Hideo Kojima often piles on top of even the most (seemingly) ordinary things. At its core, this is a sniper rifle specialist. Simple, right? There’s been no shortage of those in any number of games, after all. But then you start counting off all the layers of unique characteristics that are added on top of that core, and you get something… well, something quite strange. He’s a sniper, sure, but he’s also over a hundred years old. In that extraordinarily long lifetime, at some point he was infected with a mysterious parasite that not only allowed him to live so long, but also gave him superhuman abilities.

Using these abilities, he became an even better sniper, but more notably, he gained the ability to remain completely still in his position for unnaturally long periods of time, rendering him nearly invisible to his enemies, especially from a distance. And how could he do that? Well, because of the moss growing on top of him and inside his body, which allowed him to draw energy via photosynthesis like a plant. Weird enough for you? Well, if that’s not enough, he also has a pet parrot that wakes him up if he falls asleep in the middle of combat. And the icing on the cake? In the boss fight against The End, you can literally just stand still in a corner for a while and just… let him die of old age. 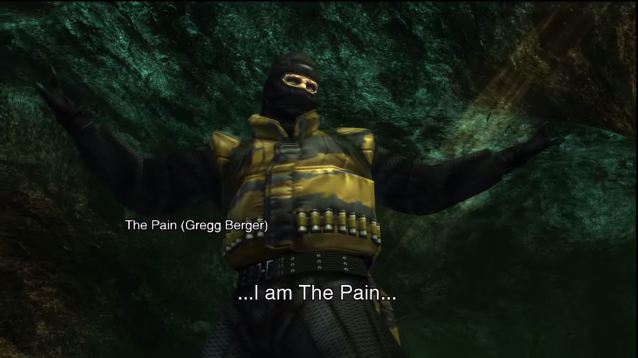 The End is definitely the most bizarre member of the Cobra Unit (which is really saying something), but his squadmates definitely do give him a run for his money. Take The Pain, for example, who lives up to his name in every sense of the word- he’s a master of doling out extreme punishment, but he does it at great personal cost. His gimmick, of course, is being able to control entire swarms of hornets, which he does by keeping a queen hornet in a backpack and using it to guide other hornets.

But wait, that’s not all. Because it’s what he uses those hornets for that really seals the deal. I mean, he uses them to attack his foes, of course, but he gets really creative about it. He can shoot out hornets from his mouth and get them to burry into his enemies’ skulls, he can throw vials of pheromones to direct the swarms, he can command the hornets to make a suit of armour encasing his body, and hell, he can even get them to make a hornet-comprised clone of himself as a decoy to fool enemies. So what if his face is all completely messed up and covered in stings and wounds? And just to convince you that he’s not a complete weirdo, he also uses a regular gun and grenades. 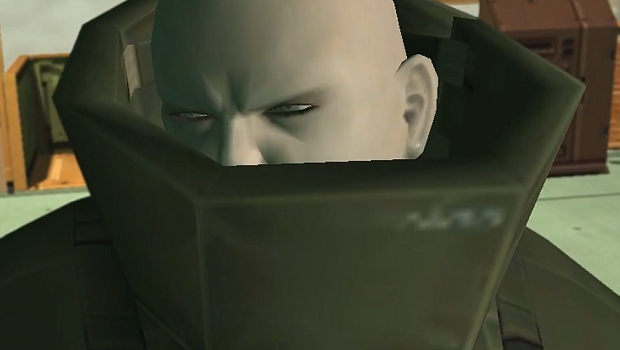 In spite of what his unkind moniker might suggest, Fatman isn’t just a particularly healthy man who might not pose much of a threat to you. No, he’s dangerously agile, devilishly clever, and more than a little mentally unstable. Kojima definitely saw the juvenile yet undeniable humour in having a stout dude literally running circles around you while wearing rollerblades in the midst of a boss fight, but to be fair, that accomplishes so much more than that. It’s used to great effect in what’s a really good boss fight, and makes Fatman quite a formidable foe.

All of that is enough in and of itself to guarantee Fatman a place on a list such as this one, but his backstory has a few more bizarre (and perhaps even unnecessary) details that just serve as the cherry on top of this sundae. He is, of course, a bit of an eccentric genius, and an expert when it comes to bomb making, which, interestingly enough, is something that can be traced back even to when he was a kid. For instance, when he was just ten years old, he built an atomic bomb all by himself by just reading a guide he found on the internet. So either he found a really good guide, or he was freakishly intelligent. Also he likes to keep his hands smooth and soft and keeps getting manicures, which is an actual detail about his character, for some reason.

Just a straight up vampire. Hideo Kojima obviously wanted one of these in his stories, and it didn’t matter that the stories he was writing didn’t really have any room for folklore creatures. Thanks to the omnipotent might of the deus ex machina known to us as “Nanomachines, son”, he ensured that even something like vampires could be perfectly at home in a Metal Gear Solid game. Those nanomachines gave him regenerative abilities, superhuman strength and agility, and of course, rendered him nearly immortal- but that’s just scratching the surface of his weirdness.

Vamp has a taste for human blood, of course, and do you know how he got that taste? When he was a child in Romania, he lost his parents in a bombing, and was buried with their corpses under the rubble for days on end. He had to survive by drinking their blood. Meanwhile, on top of all his abilities, he can also partially control peoples’ shadows, of all things. Oh, and he can also crawl along walls, because of course he can. 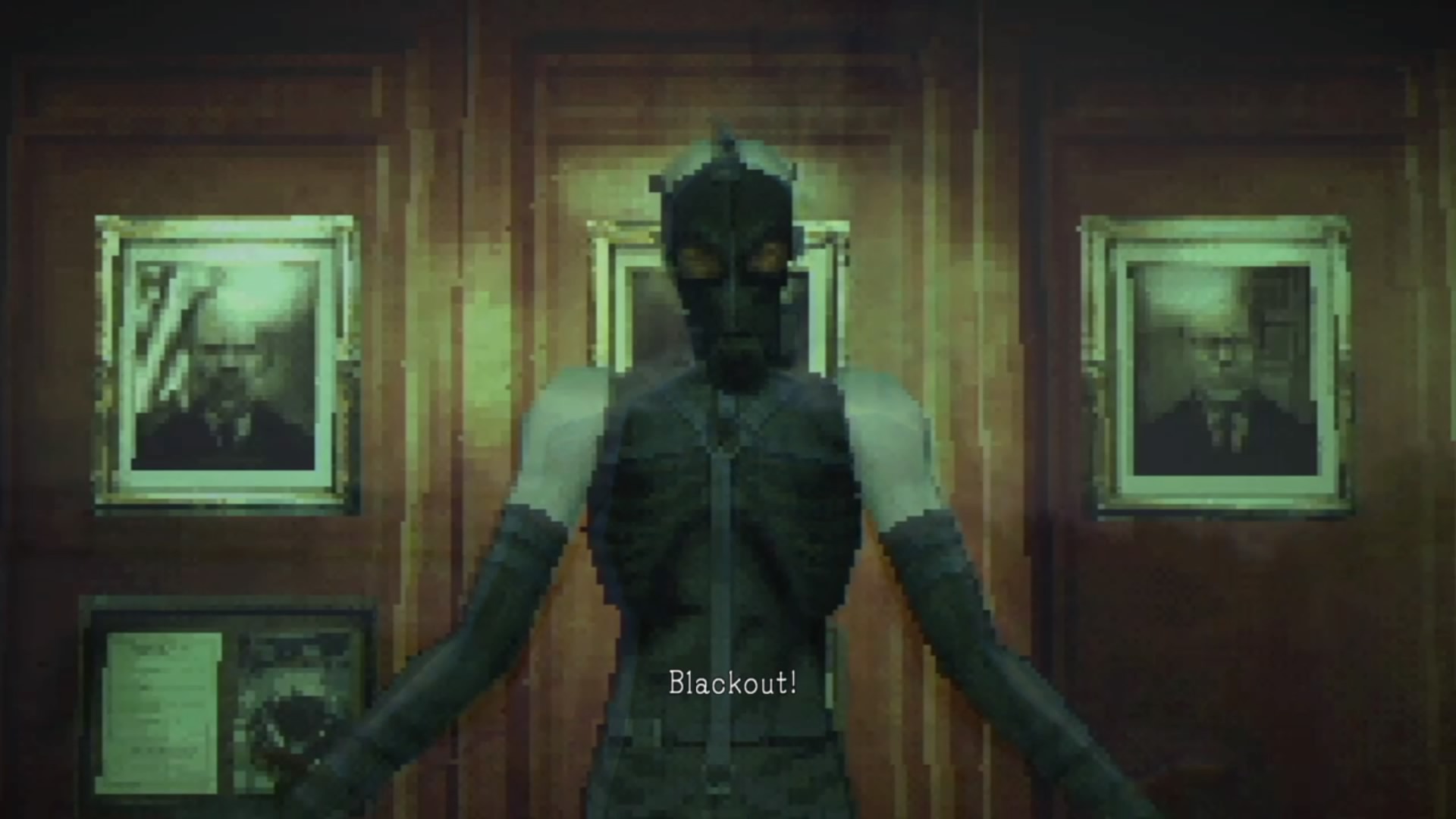 Psycho Mantis was honestly the most obvious choice for this list, so it makes sense to end it with him. He was really the blueprint on which all future Metal Gear Solid enemies would be modelled- or, well, at least his weirdness was. At a time when Metal Gear was far from the known quantity that it is today, people went into the first Metal Gear Solid title thinking they were in for a grounded espionage stealth game, and somehow found themselves locking horns with a psychic with telekinetic powers, mind control and all.

From reading your PS1’s memory card to see what other games you’d been playing to making your controller move to show off its vibration functionality, Psycho Mantis was really the flag-bearer of all the weirdness that so often defined Metal Gear Solid. Of course, he would go on to make another appearance in Metal Gear Solid 5, where he, as a child, would go on to wreak even more havoc with his abilities.