7 Reasons Why All The Mass Effect 3 Hate Is Unjustified

Mass Effect 3 has been getting a lot of hate lately, probably even more so than the likes of Call of Duty and Madden. Considering the history of those two franchises, this is a big deal. But why? ME3 clearly isn’t a bad game. It is’t a half-assed effort on BioWare’s part, and it’s one of the fullest games we’ve ever played. I mean, if a game has a Metascore of 93 and gets perfect scores from innumerable publications, including us, it obviously must be doing something right… right?

It is. It’s a wonderful game. It does have a few flaws, there’s no denying that, but from Ocarina of Time and Skyrim to Superman 64 and Big Rigs, every game has flaws. So what’s with all the hate then? Unlike a lot of people out there, I actually think the hate against Mass Effect 3 is very, very unfair, and most of it has no proper backing.

Here are seven reasons why I think the hate against ME3 is unjustified. This article will definitely get polarizing reactions, I know that, and I will be receiving a lot of hateful comments, but feedback is always appreciated. Remember, this is my personal opinion, and it doesn’t represent them opinion of all of GamingBolt.

Also, before you proceed, I’d like to point something out– I’ve played all three Mass Effect games, the first two thrice and the third one twice. I’ve read every comic book, I’ve read all the novels, heck, I’ve even played the iOS game. Right now, in fact, I’m on my first playthrough of Mass Effect: Infiltrator on the iPad. So I’m pretty deeply invested in the universe and the franchise.

So read the article, enjoy (if you will), and leave your feedback in the comments section below.

This article contains spoilers. You have been warned.

The ending actually isn’t all that bad

I get why so many people dislike the ending- there was no epilogue, no final boss battle against the terrifying Harbinger (or anyone, for that matter). I agree that it wasn’t the ending I expected- I expected better. But when I first finished Mass Effect 3, I was satisfied. The ending was fitting, in a way. Poignant. It certainly wasn’t as bad as everyone is making it out to be. To be honest, I’ve seen worse endings in a LOT of games- Killzone 2, Halo 2, God of War 3 and so many more. Why did Mass Effect 3 alone get all that hate? Because…

A lot of people are just going with the flow 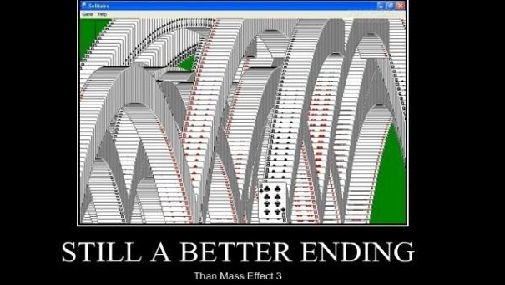 Mass Effect belongs to BioWare. BioWare belongs to EA. That’s three names right over here that generate massive amounts of hate as it is. Combined together, they give you one entity that is probably as hated as Call of Duty, if not more. Mass Effect 3 has received a lot of hate. Why? It isn’t a yearly franchise, it’s not a cash cow, BioWare puts in time and effort into making these games and delivers on their promises. Why, then, are the players overreacting so much? Because most of them are just jumping onto the hate bandwagon. Just like Call of Duty and often Pokemon, it’s “cool to hate Mass Effect.” Most of the hate out there is hyperbolic trolling that is blowing the negative aspects of the game out of proportion and neglecting the positive ones completely.

Every game has technical issues