Producer Nina Adams discusses what exactly the studio set out to do with this game.

Achtung! Cthulhu Tactics is a game set in an alternate universe where Hitler and the Nazis try to use the power of the Cthulhu Mythos for themselves. The game blends Lovecraft’s mythology with tactical gameplay and it is up to  the players to try and stop the Nazis’ mission.

To learn more about this game’s development,  Gamingbolt reached out to the developers with some questions and the game’s Producer Nina Adams provided the following answers. 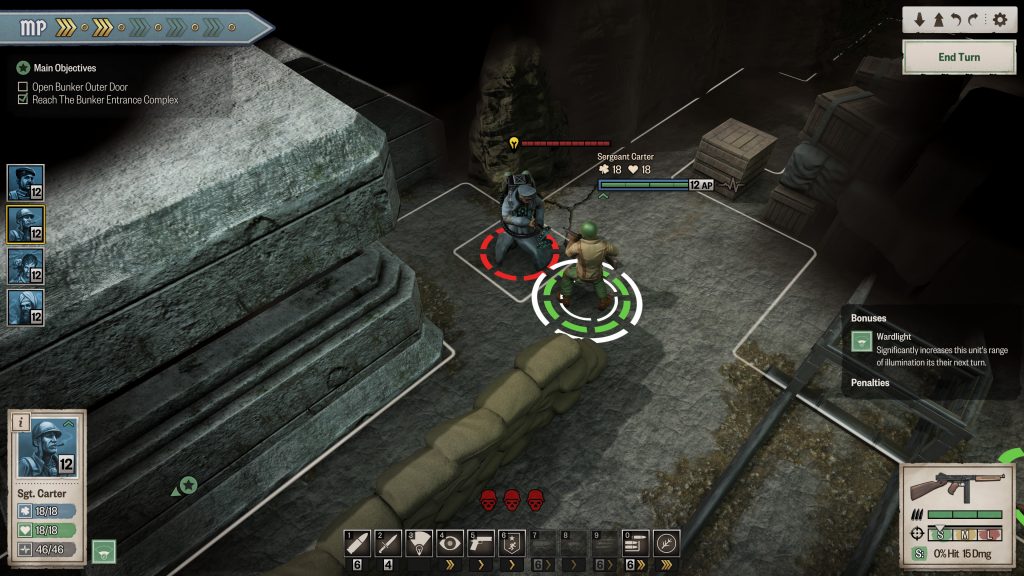 "As a studio it combined our two great loves, Cthulhu and turn-based strategy, it seemed like an obvious choice for us as the two go so well together."

How exactly does the momentum system work in the game?

You are awarded Momentum at the start of every combat turn based on the level of your leader. As you progress through the game and progress your leader, you’ll start each turn with more Momentum. You also gain additional Momentum points during a turn by hitting a critical shot. You can spend Momentum points on actions like Overwatch, using a secondary weapon, and special skills.

What inspired you to use a turn-based tactical game to tell a story about Cthulhu?

As a studio it combined our two great loves, Cthulhu and turn-based strategy, it seemed like an obvious choice for us as the two go so well together.

Can you tell us a bit about the universe of Achtung! Cthulhu ?

Achtung! Cthulhu is set in a WWII universe where Hitler and the Nazis have uncovered Lovecraft’s Cthulhu Mythos and are trying to harness it to help them win the war. The game is set behind enemy lines where our band of heroes are attempting to foil their plans and asks the question; ‘What would have happened if the Nazis discovered the Great Old Ones and used them for greater evil?’.

What made you include the Luck mechanic, and can you tell us more about how it works?

The luck mechanic acts a little like a shield, the character’s luck will reduce before HP does. Luck also recharges between combat modes whereas health doesn’t. We included this because we wanted there to be more complexity; rather than just being shot and killed. Adding this extra buffer definitely encourages the player to be more tactical in their gameplay.

The progression system is our key way of incorporating the RPG mechanics from the original tabletop RPG. We wanted the player to be invested in the characters and we’ve done this by awarding characters skill points for XP which can be spent on skills. On the skill tree there are various routes the player can take to strengthen their character. The player has total control over making their characters a general all-rounder, a strong fighter, healer etc.

In terms of gameplay, it looks like XCOM has been a major influence. What are some features of the game that set it apart?

I feel the major differences are: The Shroud, this is a beefed up fog of war which the enemy use to their advantage and creeps around the player in an attempt to engulf the characters; Momentum is an additional way of moving and acting on top of AP (Action Points); and the psychological system we’ve implemented which causes the characters to react uncontrollably when they witness Mythos creatures killing their comrades. 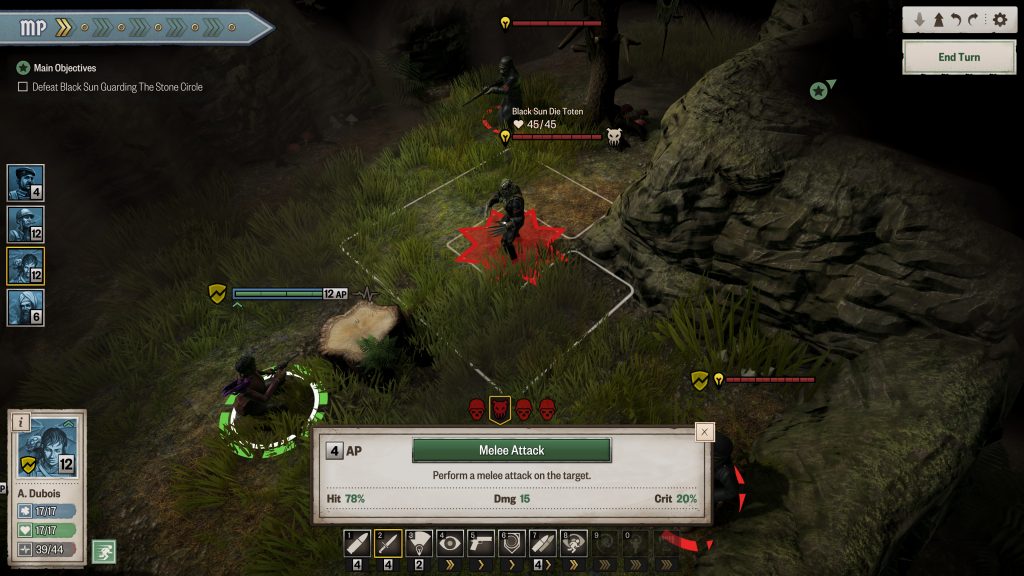 "As well as taking damage, the characters have a Stress bar. There are a few ways their stress increases, including when they take damage, when they get shot at from The Shroud, and seeing a mythos creature."

It seems like light and darkness will add an extra layer to the complexity the game.  Can you tell us more about how this works in the game?

This is our mechanic called The Shroud. The characters have a vision cone in front of them, so that when you move this cone clears an area of The Shroud, giving any enemies that fall within it a debuff. Enemies hiding in it are harder to hit so they naturally try and maneuver around you to hit you whilst remaining shrouded. The player will also need to be careful not to leave anyone behind, fallen units who are engulfed by The Shroud are captured.

How exactly does the psychological system work?

As well as taking damage, the characters have a Stress bar. There are a few ways their stress increases, including when they take damage, when they get shot at from The Shroud, and seeing a mythos creature. If their Stress level increases too much a random psychological effect will take place, for example going berserk will make the character run into the middle of the enemy and fire randomly. As they are uncontrollable like this the player may find occasionally the psychological effect has helped their situation, but more often, it will have had quite the opposite effect…

Any word on the game’s release date?

It’s going to be in your hands by the end of the year, and much sooner than you think…

You can expect graphical improvements definitely. What those will be, we’ll be talking about at a later date.

It’s great! This is our first console game and we were a bit nervous about making the jump, but we approached the development of the game in the right way – i.e. making a game that sits naturally on both console and PC, rather than simply making a PC game fit on a console. The Xbox One X is capable of some truly astounding things and we’re really pleased to be making games for it. 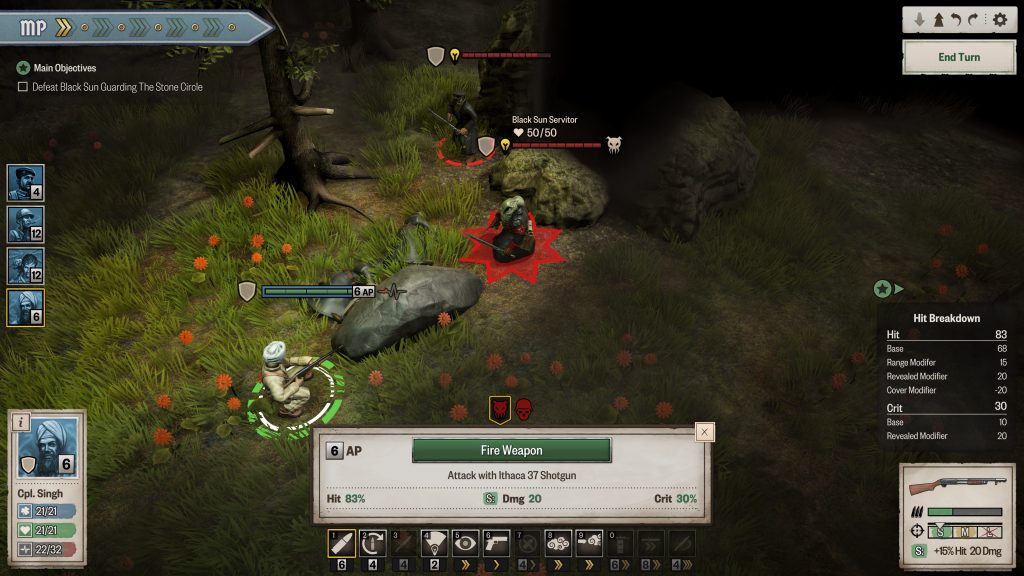 "But will the platform owners champion more indie stuff in the future? What about niche stuff? Will we ever see a store front not dominated by the huge AAA releases and the odd “Big Indie” title?"

The main thing we’re excited about is seeing how the consoles embrace studios like ours, and related to that, how they handle curation of content. We’re a relatively small team – all in there’s about 20 of us at the studio – and so getting to launch titles on consoles is extremely exciting, as it gives us a wider audience. But will the platform owners champion more indie stuff in the future? What about niche stuff? Will we ever see a store front not dominated by the huge AAA releases and the odd “Big Indie” title? The occasional big push from a platform holder can really make amazing differences to smaller teams, but the opportunities to get those is limited right now. As a studio we’d like to see more of them!

I can’t really comment to them in a wider industry sense, as the reasons for their use differ from team to team and project to project. They make more sense in some games and less sense in others – a game like Clash of Clans couldn’t really exist without them, for example, but a point and click adventure would struggle to include them in a way that wasn’t obtrusive.

As a studio, right now they’re not for us. They don’t fit the kinds of games we’ve made previously and they don’t fit any of the games we have in the pipeline. Our ethos is that if a monetisation model gets in the way of the overall design goals, it’s probably not one you should implement.