Fanbyte Media News Editor Imran Khan reignited rumours surrounding the future status of Warner Bros. catalogue of video games studios this week by tweeting he’s hearing grumblings of WB parent company AT&T once again looking to offload its subsidiary of game developers, with potential to retain IPs with which to then sell the licenses for. Now, I repeat, nothing has been substantiated beyond rumour, but whisperings of Warner Bros. selling on its considerable gaming talent have been churning since 2020. Most recently, during the time Warner Bros. Media was merging with Discovery in May 2021, rumours of TT Games and NetherRealm Studios impending ‘for sale’ signs gathered momentum before being shut down by the big wigs at newly merged Warner Bros. Discovery.

Perhaps to blame for adding fuel to their own fire, Warner Bros. announced the sale of mobile games developer Playdemic to EA shortly thereafter. In the sale’s press release, WB Discovery confirmed there were no other developers for sale; Playdemic was to be the only one. Of course, in the nebulous world of mergers and acquisitions, this press release could simply have been published as a three-pronged attack to appease investors, protect share prices, and quash rumours once and for all.

Well, less than a year later and here we are again. In that timeframe we’ve seen major shakeups in the industry; Microsoft are in the process of finalising purchase of Activision Blizzard for an eye-watering $68.7 billion, and in retort Sony have splashed the cash on Bungie for $3.6 billion.

Activision Blizzard’s sale price, as stratospheric as it is, represents remarkably good business for Microsoft, not least because the Redmond, Washington based company have immeasurably deep pockets and thus lassoing leaders in video games publishing and keeping them out the hands of its competitors is an obvious strategy, but also because the multi-billion dollar deal fits snugly into Microsoft’s long-term vision of significantly bolstering its first-party offerings across PC, console, and mobile, whilst building foundations for eventual expansion into the metaverse. Plus, Activision Blizzard encompasses more than 10,000 talented developers scattered worldwide.

In contrast, Sony’s acquisition of Bungie looks like a knee-jerk reaction, as if they looked at the news and though “we’ll have some of that.” They’ve paid over the odds for the Halo and Destiny developer, it’s as simple as that. See, Bungie’s annual revenue eclipses $200 million. Compare this to EA’s $700 million acquisition of Respawn a few years ago. At the time, Respawn was generating $700 million in revenue, so breaking even and turning a profit on the purchase would take just a year at least. On a purchase price of $3.6 billion, it seems unlikely Sony will recoup any profit.

Sony’s ambition to become the world’s most fully integrated entertainment company is hardly faltering though. Their media portfolio encompasses music and movies, TV, audio equipment, consumer tech, and, of course, gaming. Further expanding their video games empire by gobbling up Warner Bros. disparate studios makes a lot more sense than the Bungie acquisition. Firstly, it’d keep those developers – of which Rocksteady Studios, Monolith Productions, and Avalanche Software are a part – out of the hands of their competitors. And we’re not just talking about Microsoft here. No, these studios with esteemed pedigree, such as the Arkham series developers or Lego games creators, would be an attractive proposition to those media company’s that’re looking to expand into the sector. It’s no secret Apple, Netflix, Amazon, and Google would love to tap further into the global video games industry, and acquiring a studio let loose by WB Discovery could prove a valuable steppingstone.

Sony is in a somewhat unique position amongst their competition. Their long-established high status in TV, movies, and video games means they can combine franchises across multiple platforms at a scale that is largely unmatched. Case in point: the Uncharted movie was a collaborative effort between Sony Interactive Entertainment and Sony Pictures. Now, Sony’s video games and movie production wings you might think are one and the same, but according to Sony Chief Executive Kenichiro Yoshida, Sony are riding a wave of internal cultural change. Formerly, he says, they were a patchwork of conglomerates. Now they’re a united entity, their various empires closer connected, and thus the production of projects such as future movie tie-ins to video games could theoretically come to fruition in a more streamlined process, evolving beyond the lengthy development cycle of the Uncharted movie.

You don’t need me to tell you that Warner Bros. houses huge movie franchises in its vaults. Lord of the Rings, Harry Potter, and DC Comics are a fraction of the household names under their command. Bringing development teams that’re licensed to make games under these franchises makes perfect sense for Sony if they’re looking to continue down their path of video-game-movie tie-ins. There is a potential fly in the ointment though – Imran Khan also tweeted that its likely WB Discovery would retain their intellectual property to subsequently license for a fee after selling off their studios. Should this be the case, and say hypothetically Sony purchased Rocksteady, they’d also need to acquire the license to use DC intellectual property in any future titles.

And let’s be clear, if Sony wish to get their money’s worth when they next purchase a video game developer, they’ll need to acquire both the talent and the globally recognised intellectual property. Otherwise, acquisitions of this magnitude risk being supremely unprofitable.

Licensing intellectual property isn’t an alien concept to Sony of course. Whilst media companies the world over are competing to saturation point in the streaming market, Sony are notably absent. Instead of contributing to the $140 billion projected investment on streaming content by the likes of Netflix, HBO, and Disney+ in 2022, Sony instead are selling content, not buying. In fact, they’ve recently sold $3 billion worth of streaming rights to Disney+ and Netflix, giving those platforms exclusive license until 2026 to stream their movies once theatre runs end.

Time will tell how shrewd a move this ‘arms dealer’ approach to streaming will be for Sony, but with Netflix’s reported drop in subscribers it’s looking like a rosy strategy for the moment. Bringing Warner Bros. film franchises under Sony’s umbrella presents perfect opportunity then to reaffirm this strategy too. In a world where streaming platforms are spending exorbitant sums of money with no guarantee of ever making a profit, licensing presently seems the most viable. 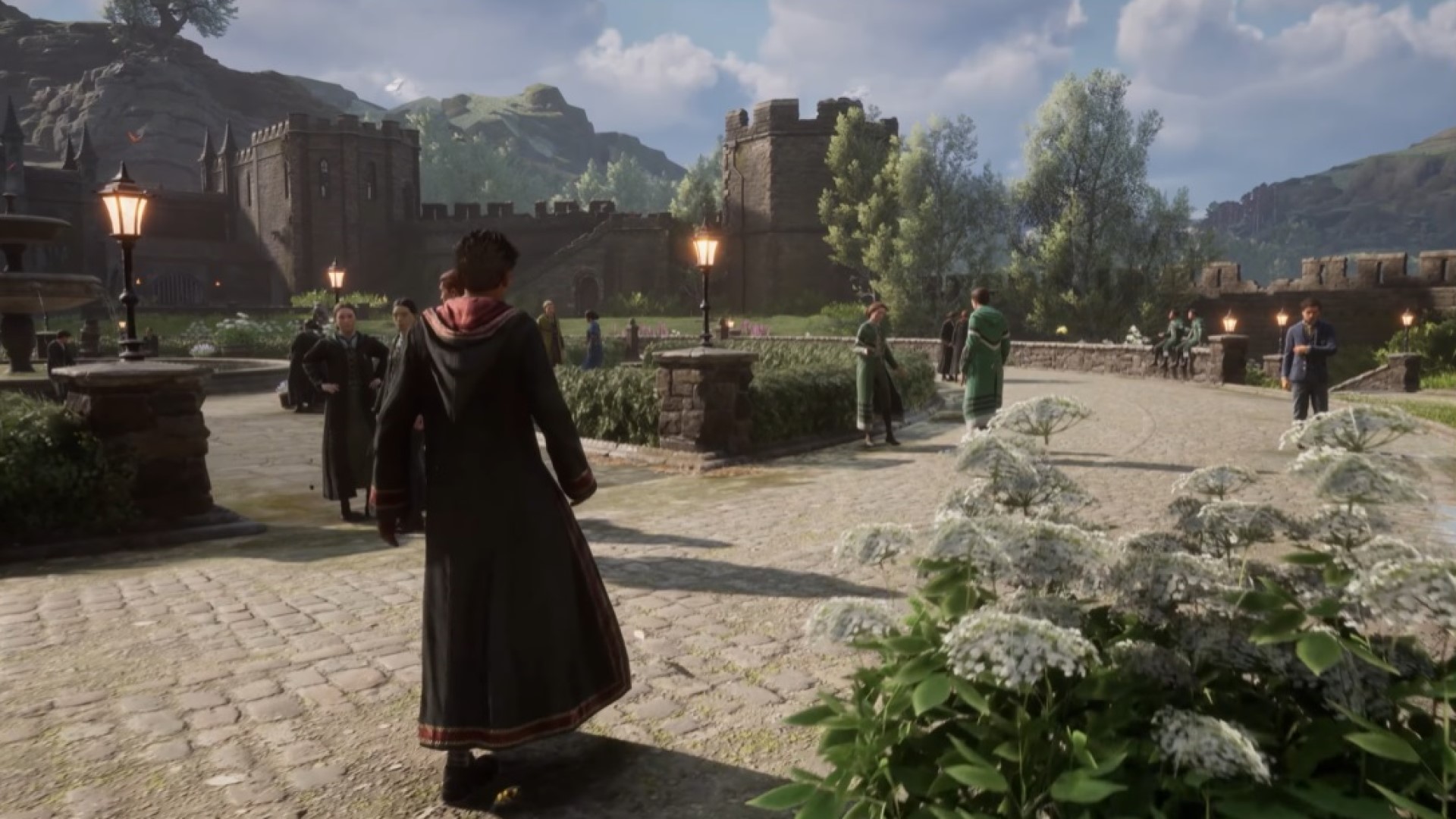 This point of view is supported by Sony Interactive Pictures turning a record profit in 2021, bolstered in large part to the success of Spider-Man: No Way Home. Clearly Sony know which side their bread is buttered, and despite the questionable Bungie acquisition, and after years in the doldrums as a disjointed entity of media divisions, they appear to have found focus on the direction they need to take.

Wedbush Securities Managing Director Michael Pachter, himself a well-established market analyst, reckons WB Games’ portfolio of studios would be a perfect fit for Sony too, but only if the rights to license the DC Comics franchise back to the studios was included in the inevitably huge price tag. In his words: “Warner Bros. Interactive isn’t worth full price without the rights to exploit the DC Comics franchise.”

As a final point, I’m compelled to reflect on whether these endless mergers and acquisitions are good for the video games industry as a whole. We appear to be hurtling towards a future where only a handful of companies own everything in the world. For video games, this could go many ways – maybe we’ll see investment and widespread adoption into cool future tech like VR, or perhaps platform exclusivity with every game release will become the norm. In an industry where content is king, over-dependence on hardware might fade away. We’re already seeing it happen with streaming services, so let’s hope the games industry doesn’t follow suit.